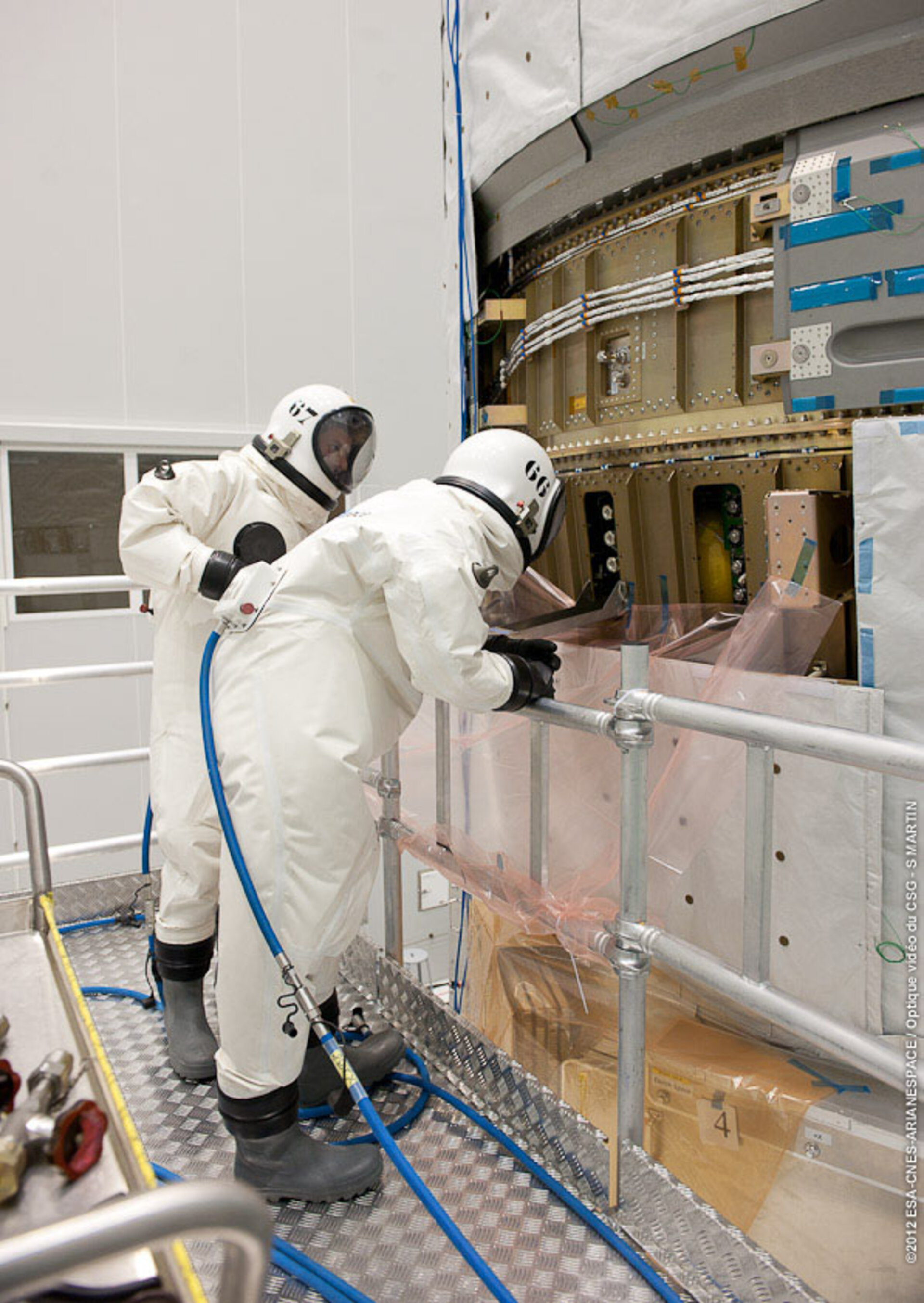 Fuel, water, oxygen, air and most of the dry cargo have been loaded into ESA's third Automated Transfer Vehicle, Edoardo Amaldi, as the 9 March liftoff approaches.

Since arrival at Europe's Spaceport in Kourou, French Guiana, last August, the space ferry has been undergoing intensive preparations to fly to the International Space Station next month.

Launch preparations began as soon as the 10-tonne ferry's two main sections – the cargo carrier and the spacecraft itself – arrived in French Guiana by ship late in August.

"By end-August, we had moved both halves into their respective cleanrooms here and started checking that everything was OK after the sea journey," says ESA's Charlotte Beskow, ATV deputy launch campaign manager.

"September and October were spent checking systems, preparing the loading of dry cargo arriving from Europe and NASA, and integrating final components such as the folding solar panels that had been shipped disassembled.

"By mid-December the two sections of ATV-3 had been joined, and Edoardo Amaldi finally looked like a real spacecraft."

January saw a series of delicate fuelling operations, says Charlotte: "By the end of last week, we had loaded 5411 kg of fuel, to be used to power itself and to perform reboost and attitude control of the Station, plus 860 kg of fuel to be transferred to the Russian Station segment. We've also taken on air and oxygen."

Part of February will be spent loading 535 kg of last-minute items, which must be carefully lowered into the ATV's cargo compartment via the main docking hatch.

Ready to go to Station

In parallel, the operations team at the ATV Control Centre in Toulouse, France, have been running exhaustive simulations to ensure that controllers and engineers are ready for all phases of the flight as well as any emergencies.

"We practise for any conceivable situation. For example, what to do if docking goes wrong or if we suddenly lost our main flight computers," says Jean-Michel Bois, Head of the ESA Operations Management Team in Toulouse.

"The entire ground team and our mission control systems passed the Joint Operational Readiness Review with NASA and Russia's Roscosmos/RSC Energia on 17 January, and, here in Toulouse, we completed a tough, three-day simulation on 27 January.

As of today, we are ready to go to the Space Station."

"On 7 February, ATV Edoardo Amaldi will be moved to the huge Vertical Integration Building for mounting on the top of its Ariane launcher two days later," says ESA's Massimo Cislaghi, ATV-3 mission manager.

"There are also additional simulations planned, including one involving the Station control centres in Houston and Moscow.

"By early March, we will be ready for a spectacular morning liftoff and a smooth flight to the Station."