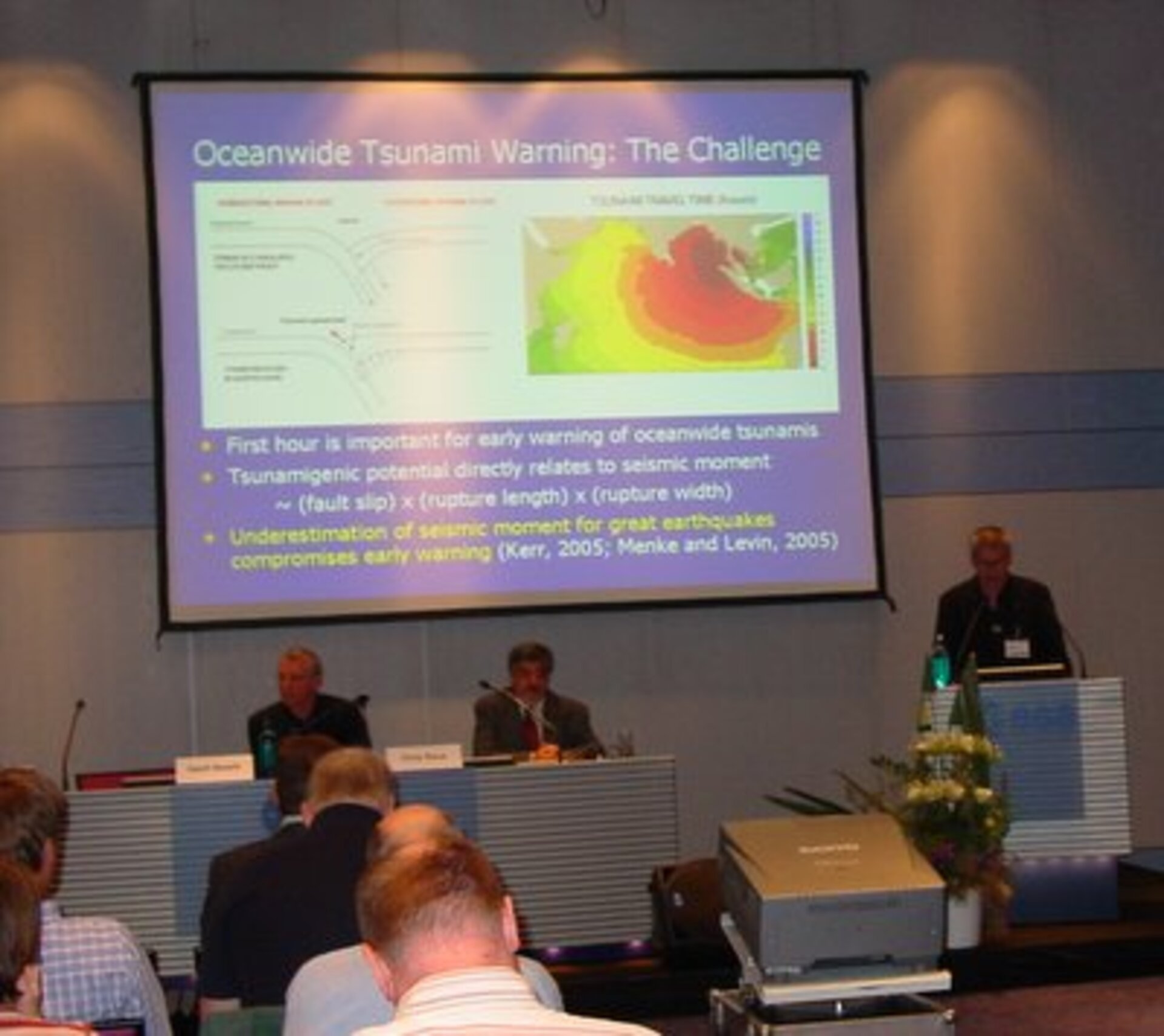 Over 140 geoscience and navigation experts from around the world met at ESOC for the 2006 IGS Workshop. Scientists presented fascinating results from research in geodesy, geophysics, orbital measurement, navigation and coordinate system design, which are leading to better tools for measuring sea-level and atmospheric changes -- and may one day help predict tsunamis and earthquakes.

Many workshops and conferences hosted by ESA delve into highly technical and scientific topics, but few offer as much scope for improving the lives and livelihood of millions of people as last week's IGS (International GNSS Service) Workshop. The week-long event saw some 140 experts from more than 25 countries working in the area of GNSS (Global Navigation Satellite Systems) gather to present results and chart a course for future research and service provision activities.

The IGS, a non-governmental organisation, has grown from informal academic beginnings some 15 years ago into the world's foremost interdisciplinary service providing orbit data and clock corrections for navigation satellites and ground receivers, highly accurate location information and models of the Earth's atmosphere, as well as a host of special products and services.

Many participants work with the current satellite navigation systems, including the 29 satellites of the USA's GPS (Global Positioning System) and the 14 satellites of GLONASS (Russia's Global Navigation Satellite System), both primarily military systems. In the near future, Europe's next-generation, 30-satellite civilian system, Galileo, is scheduled to enter into operation.

ESA's Galileo project is opening up a new era in global satellite navigation. One test satellite, GIOVE-A, is already in orbit as the first element in the system’s in-orbit validation, and further validation missions are scheduled for launch in 2008. Galileo was a lively topic at the IGS workshop with multiple presentations from the Galileo Project Team at ESTEC. There were also presentations from two major Galileo industrial participants.

In March 2005, the IGS adopted its current name, dropping the former 'International GPS Service' title, to better reflect the organisation's increasing interest in the new navigation satellite systems, in particular Galileo, and its role as a research organisation and service provider for applications related to air, sea and land navigation, weather forecasting, mapping, geo-research, geodesy and education. The IGS comprises over 200 agencies, universities, and research institutions in more than 80 countries and provides GPS satellite data at an accuracy of better than 5 cm, the highest precision in the world. IGS members also operate some 350 ground stations that receive and process satellite navigation and other data.

IGS products support scientific activities such as improving and extending the International Terrestrial Reference Frame (ITRF), monitoring deformations of the solid Earth and variations in the fluid Earth (such as sea levels, ice sheets, etc.) and in Earth rotation, determining orbits of scientific satellites and monitoring the ionosphere.

One of the key topics discussed last week was the ongoing development of the Global Geodetic Observing System (GGOS), which will use highly accurate satellite data and integrate diverse geodetic techniques and models to achieve long-term consistency, reliability and understanding of geodetic, geodynamic and global change processes. The GGOS could also use esoteric yet highly reliable location data such as the position of quasars in deep space. The GGOS would provide a solid scientific and infrastructural basis for most global change research on Earth; some 60 countries are interested in developing such a system.

Prof. Dow: An essential step in predicting tsunamis and earthquakes

"When oceanographers wish to observe sea level variations due to climate change, they must have a well-defined and very accurate global reference frame," explained ESA's Prof. John Dow, a leading expert on navigation systems and host of the workshop. "The Earth is a dynamic system and, for example, being able to measure movement due to tsunamis and earthquakes helps us know how these phenomena work and is an essential step in knowing how to predict them," he added.

The GGOS -– a fundamental part of the new Global Earth Observing System of Systems (GEOSS) -- would bring current and future Earth-watching systems into one overall system to avoid duplication and boost accuracy and timeliness. GGOS contributes to GEOSS not only by providing an accurate reference frame but also with observations related to the global hydrological cycle, the dynamics of the atmosphere and oceans, and natural hazards and disasters. The system is used by external customers such as United Nations offices and national governments.

"Geo-information has direct applications in navigation, weather prediction and monitoring and understanding environmental change. These data and services can help improve the lives of millions of people who use information from national governments to plant crops, react to climate change and respond to natural disasters. It is an area of tremendous significance for the future," says Dow.