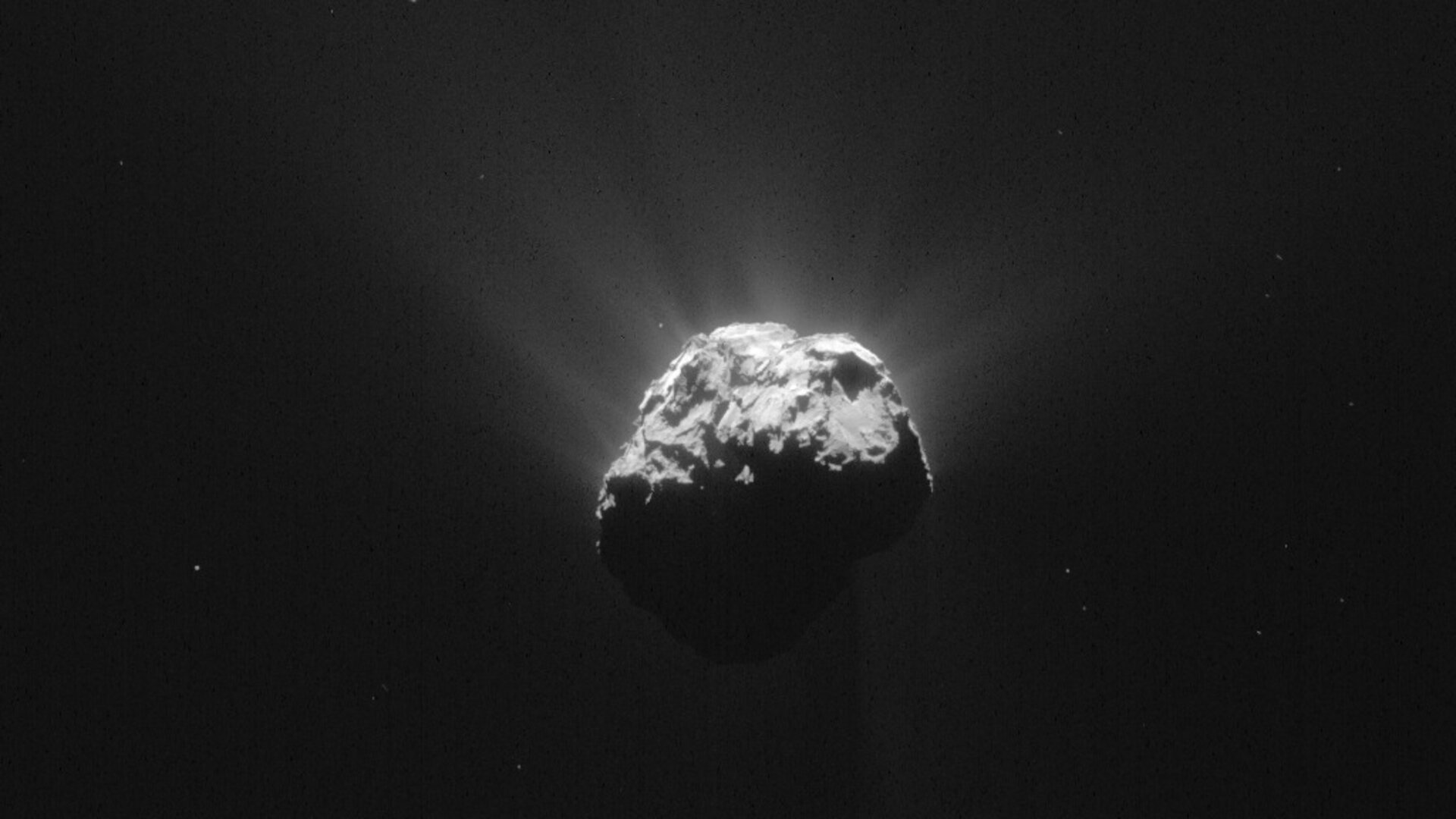 The receipt of signals from Rosetta’s Philae lander on 13 June after 211 days of hibernation marked the start of intense activity. In coordination with its mission partners, ESA teams are working to juggle Rosetta’s flight plan to help with renewed lander science investigations.

Philae has woken up after seven months in hibernation on Comet 67P/Churyumov–Gerasimenko. Hidden by shadows, Philae shut down on 15 November 2014 at 00:36 GMT after completing its main science operations sequence on the comet when the primary battery expired as expected after about 60 hours.

Since March 2015, when Philae’s environmental conditions started to improve with higher surface temperatures and better illumination, the orbiter’s receiver had been turned on periodically to listen for signals from the lander when the orbital geometry was thought to be optimum.

On the evening of 13 June, a weak but solid radio link between Rosetta and the lander was finally established for 85 seconds. More than 300 ‘packets’ – 663 kbits – of lander housekeeping telemetry were received. This information had been stored on board at an as-yet-to-be determined time in the past, as much as several days to a few weeks, so does not necessarily reflect the lander’s current status.

“We are still examining the housekeeping information at the Lander Control Centre in the DLR German Aerospace Center’s establishment in Cologne, but we can already tell that all lander subsystems are working nominally, with no apparent degradation after more than half a year hiding out on the comet’s frozen surface,” says DLR's Stephan Ulamec, Philae Lander Project Manager.

A second, smaller burst of lander data was received on Sunday, 14 June, at about 21:26 GMT, lasting just a few seconds. These data were confirmed to give the current status, showing the lander’s internal temperature had already risen to –5ºC.

Philae’s memory has stored over 8000 packets of additional status data, but it is unclear from when in recent days they were recorded.

Engineers at the Lander Control Centre have determined that Philae is already being exposed to sufficient sunlight to heat it to an acceptable operating temperature and to generate electricity.

“Power levels increase during the local ‘comet day’ – the part of the about-12 hour comet rotation when Philae is in sunlight – from 13 W at comet sunrise to above 24 W,” notes ESA’s Patrick Martin, Rosetta Mission Manager. “It needs at least 19 W to switch on the transmitter.”

The telemetry downloaded covered the lander’s status for a full night–day cycle of the comet, which is helping ground teams to understand how the Sun is shining on the lander. The solar panels appear to be receiving power for over 135 minutes in each illumination period.

“While the information we have is very preliminary, it appears that the lander is in as good a condition as we could have hoped,” says Dr Ulamec.

The task at hand

The main task now for all the mission partners – ESA for Rosetta operations and DLR and France’s CNES space agency for lander operations and science, respectively – is to determine how to optimise Rosetta's orbit so as to facilitate contact and enable new science investigations.

It is believed that there is sufficient power now being generated to allow some science measurements during the time Philae is illuminated, with initial activities focusing on low-power measurements. This first phase would also likely include measurements that did not previously generate science in November.

However, the mission teams first must establish a more robust link between Rosetta and Philae before uploading the first batch of science operations commands.

The quality of the communication link is also possibly related to the trajectory Rosetta is flying and the orientation it adopts.

Optimising an orbit 305 million km away

Until 23:35 GMT on Tuesday, 16 June, Rosetta will be flying an orbit set by already-uploaded commands on the terminator – the plane between comet day and night – moving out from about 200 km to 235 km altitude.

This orbit is not optimised for lander communication, so longer periods of contact may not be possible until the trajectory has been changed.

“With work done by the flight dynamics and operations team at ESOC and based on intense planning being conducted with the mission partners today, a new orbit will be devised that ensures optimum lander communications beginning with the next command upload later tonight,” says Paolo Ferri, ESA’s Head of Mission Operations.

This new orbit will include an already-planned reduction of distance from the nucleus, down to 180 km versus 200 km, and ‘nadir pointing’ – continuously pointing Rosetta’s communications unit at the comet. In the coming days, the orbiter may also be moved closer to the comet, without compromising the safety of the spacecraft, to help communications.

The new orbit will be flown by Rosetta starting after 23:25 GMT on 16 June until 19 June, aiming to enable more and longer contacts with Philae, especially towards the end of this period.

Establishing a regular and predictable pattern of contacts is a prerequisite for performing a complete assessment of the lander’s status and for planning science operations.

“If we manage to achieve and maintain a predictable contact pattern,” continues Paolo Ferri, “the lander teams can devise a strategy for a new sequence of scientific operations.”

“Regardless, we will stay very flexible and be ready to react quickly. It’s clear this incredible mission continues to stimulate and challenge us, developing in ways we could never have predicted.”

As a bonus, any operation of Philae’s instruments up to or through perihelion on 13 August – the comet’s closest point to the Sun along its orbit – will allow in-situ study of a comet during its peak activity.

Had Philae landed at the planned site, at Agilkia in November 2014, its mission would likely have ended in March because of the higher temperatures of that location as solar illumination increased.

Philae was contributed by a consortium led by DLR, the Max Planck Institute for Solar System Research (MPS), CNES and Italy’s ASI space agency. It made the first-ever soft landing on a comet on 12 November 2014.