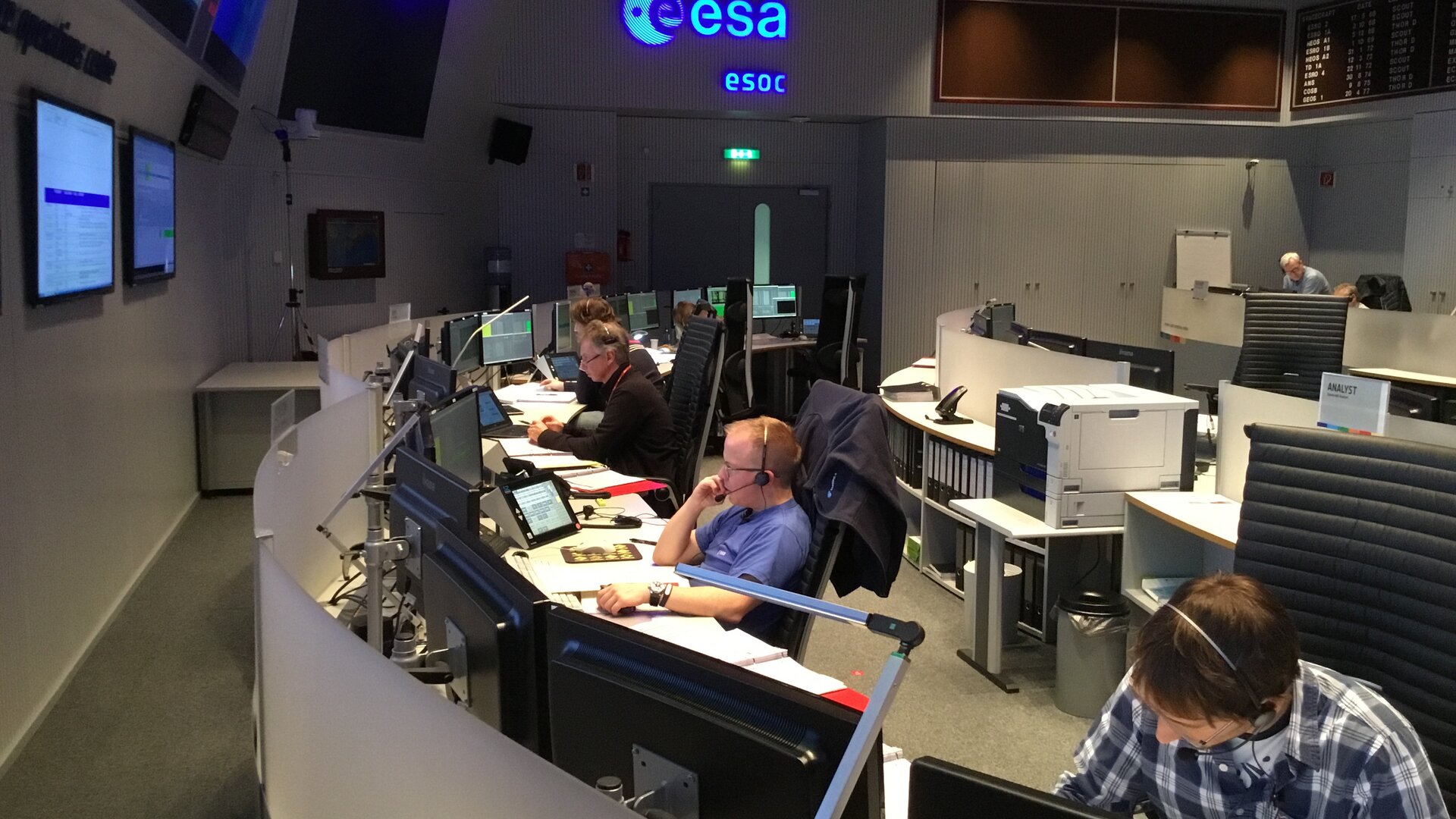 Mission controllers completed a critical final rehearsal today, confirming that everything and everyone on ground are ready to take over control of Sentinel-5P in the harsh environment of space.

A ‘team of teams’ working at ESA’s control centre in Darmstadt, Germany, today conducted a final rehearsal for this week’s launch of Sentinel-5P.

They were joined by engineers working at ground stations on three continents and by teams responsible for the launcher and its payload in Plesetsk, Russia.

Sentinel-5P will be the first satellite dedicated to monitoring our atmosphere for Europe’s ambitious Copernicus programme. It carries the Dutch-built, state-of-the-art Tropomi instrument to map a multitude of trace gases affecting the air we breathe, our health and our climate.

Expansion of the Sentinel fleet in orbit highlights the expertise of teams at ESA and their capability to fly ‘constellation’ missions, as Sentinel-5P will fly in tight coordination with the US Suomi-NPP mission.

Today’s rehearsal capped off almost six months’ intensive training for the 40 engineers and scientists working who will assume control of the satellite following lift off, set for 09:27 GMT (11:27 CEST) on Friday on a Rockot from the Plesetsk Cosmodrome.

Following tradition, today’s rehearsal simulated a normal launch, providing all teams with a final opportunity to repeat the actions they must perform for real on Friday, assuming all goes according to plan.

“This will be our sixth Sentinel satellite launch, but we can never take for granted that everything will function correctly,” says Paolo Ferri, head of mission operations.

“Any satellite’s hardware, software and systems are severely stressed during launch and the first hours in space, and there are always surprises – going to space is never routine.

“But our teams are the most experienced in Europe, very competent and well trained and I am confident they are ready to handle any contingency.”

Practising for any event
In today's rehearsal, the mission team worked ‘on console’ in the main control room, and were led through the countdown, the liftoff and the initial hours of flight, including receipt of the satellite’s first signals from space.

The team included operations engineers, specialists working on tracking stations and the sophisticated ‘ground segment’ – the hardware and software used to control the satellite and distribute its data – and experts working in flight dynamics, software and networks, as well as simulation and training teams.

“We’ve practised every phase of the mission through 23 day-long simulation sessions, some in which everything went according to plan, and some in which unexpected anomalies or system failures occurred,” says spacecraft operations manager Daniel Mesples.

For today’s rehearsal, the real Sentinel-5P sitting on top of its rocket was connected to the mission control systems in Darmstadt via an umbilical data link, which will be dropped just minutes before liftoff.

In parallel, teams at the launch site went through all the operations they will have to perform on the day itself.

“This provided all teams involved with the maximum level of realism in this final rehearsal,” says flight director Pier Paolo Emanuelli.

“We will now certify that mission control is ready to support the launch of Sentinel-5P on Friday.”

For the team at mission control, the most critical moment on Friday will occur some 14.5 minutes after Sentinel-5P separates from the rocket, starting its own free flight.

That’s when the satellite will make its first call home, signalling via a ground station in Sweden that all is well and reporting its health and status.

Acquiring that signal is perhaps the most important moment in the intensive Launch and Early Orbit Phase, which will last three days and see the control team working in shifts around the clock.

These days will include a series of activities to verify the satellite’s health, ensure it has solar power and full communications, activate systems like the startracker cameras and the GPS receiver for navigation, and ensure it is fully functional after its raucous ride into space.

If all goes well, the team will switch to normal daytime staffing, and move on to the next phase of the mission: commissioning Tropomi.

“I am very proud of everyone who has worked so hard to ensure that our teams, our systems and our centre are ready for Sentinel-5P launch,” says Paolo.

“Next spring, we expect to launch the seventh satellite, Sentinel-3B, completing the first part of the Copernicus fleet in just 30 months, an impressive achievement in support of Europe.”