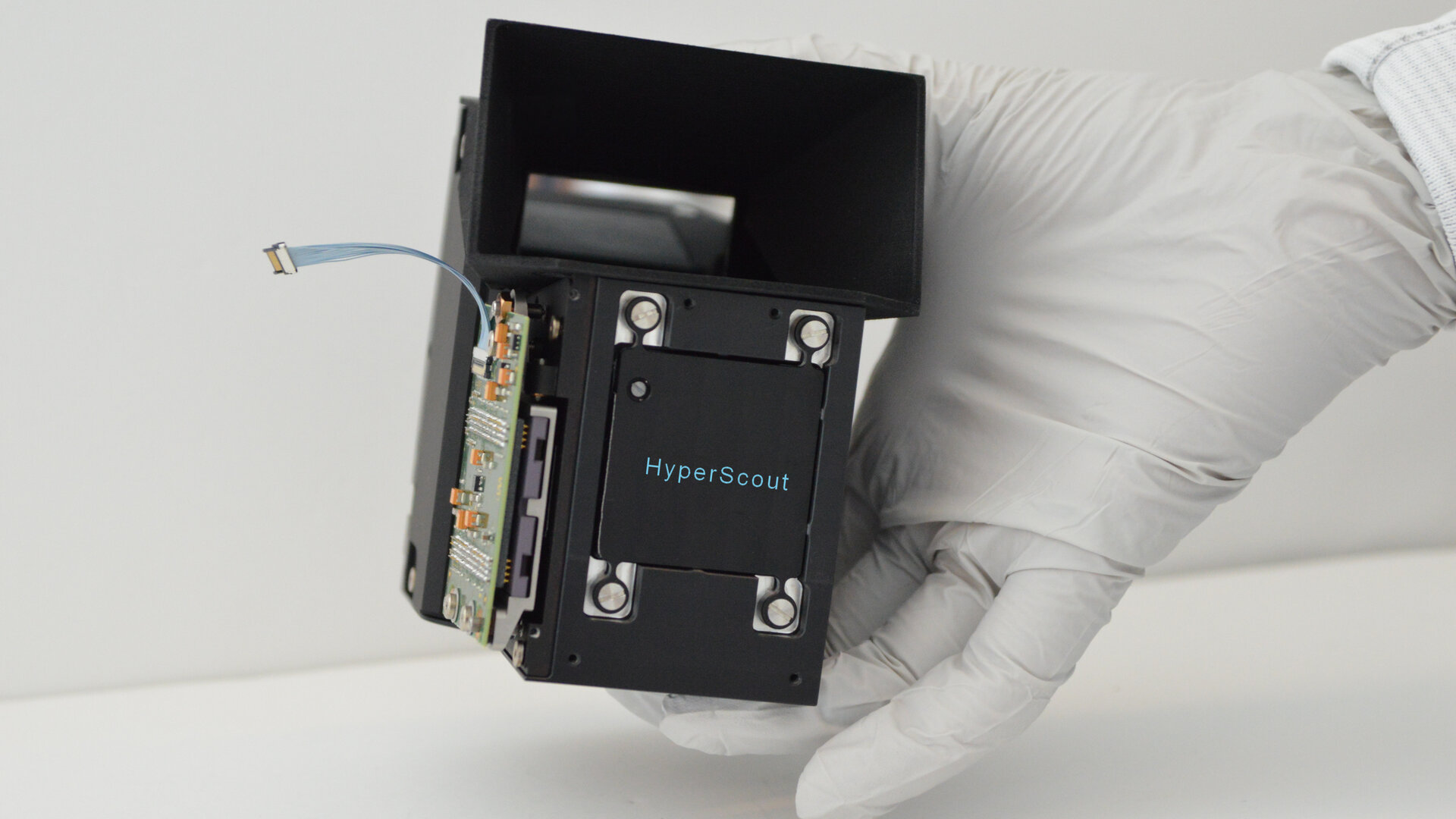 Colour equals information, so the more spectral bands an Earth-observing satellite sees, the greater quantity of environmental findings returned to its homeworld. Now ESA is ready to fly a hand-sized hyperspectral imager – small enough to fit on its next nanosatellite.

Observing in 45 visible and near-infrared spectral bands, the HyperScout instrument will be launched on 2 February, aboard ESA’s cereal box-sized GomX-4B nanosatellite.

Hyperspectral instruments divide up the light they receive into many narrow, adjacent wavelengths to reveal spectral signatures of particular features, crops or materials, providing valuable data for fields such as mineralogy, agricultural forecasting and environmental monitoring.

These cameras are typically bulky items of 100 kg or more, requiring costly full-sized satellites. But advanced electronics, new materials and optomechanical manufacturing techniques have opened up new possibilities for miniaturising payloads, with lower but still acceptable performances in terms of radiometry and spatial/spectral resolutions, when comparing to their bigger cousins.

ESA worked with industrial partners for years to shrink the complex assemblage of precisely curved ‘three-mirror anastigmat’ mirrors needed to achieve a hyperspectral imager small enough to fit in the palm of a hand.

“Having got the payload working from an optical point of view, the next challenge we faced was the sheer quantity of data that hyperspectral imagers produce, potentially terabytes per orbit,” explains Alessandro Zuccaro Marchi of ESA’s Optics section.

“Each line of each view is observed in many different wavelengths, building up into a complete image ‘cube’. The problem is that the available bandwidth downlink back to Earth faces fundamental limitations, set by the CubeSat’s small size, threatening onboard data bottlenecks.”

The answer was to make HyperScout as smart as possible, to perform as much image processing as possible onboard, to turn raw radiance measurements into corrected, georeferenced geophysical parameters. Such Level-2 results comprise less data, but contain much more useful information.

“In addition, HyperScout will be sufficiently intelligent that it will be able to perform automated comparisons of images of the same location taken in different moments, such as subsequent orbits,” adds Alessandro.

“It can then flag any variations that might indicate important changes such as flooding, drought or fire hazards, going on to decide an alert needs to be sent to Earth. So only really important, actionable notifications will need to be returned.”

Gomx-4B’s main goal is to demonstrate intersatellite communication techniques and micropropulsion orbit control with near-twin GomX-4A, but time is being made available to make repeat acquisitions over areas of interest, in combination with airborne observational campaigns using another HyperScout.

HyperScout was developed by a consortium led by cosine Research in the Netherlands, who stressed the value of this early chance to demonstrate the technology in orbit for the technology’s commercial future.

“HyperScout is a unique combination of hardware and software,” comments Marco Esposito of cosine Research. “Bigger instruments can make more precise measurements of different components of ecosystems, but require years of development.

“Mass produced, this compact instrument could instead be flown as a secondary payload on numerous different missions, potentially to be used as an early warning viewfinder – providing realtime alerts of changes on the ground to cue up larger instruments for detailed follow-up observations.”

cosine worked with TU Delft and VDL ETG in the Netherlands, Belgium’s VITO Remote Sensing and S&T in Norway.