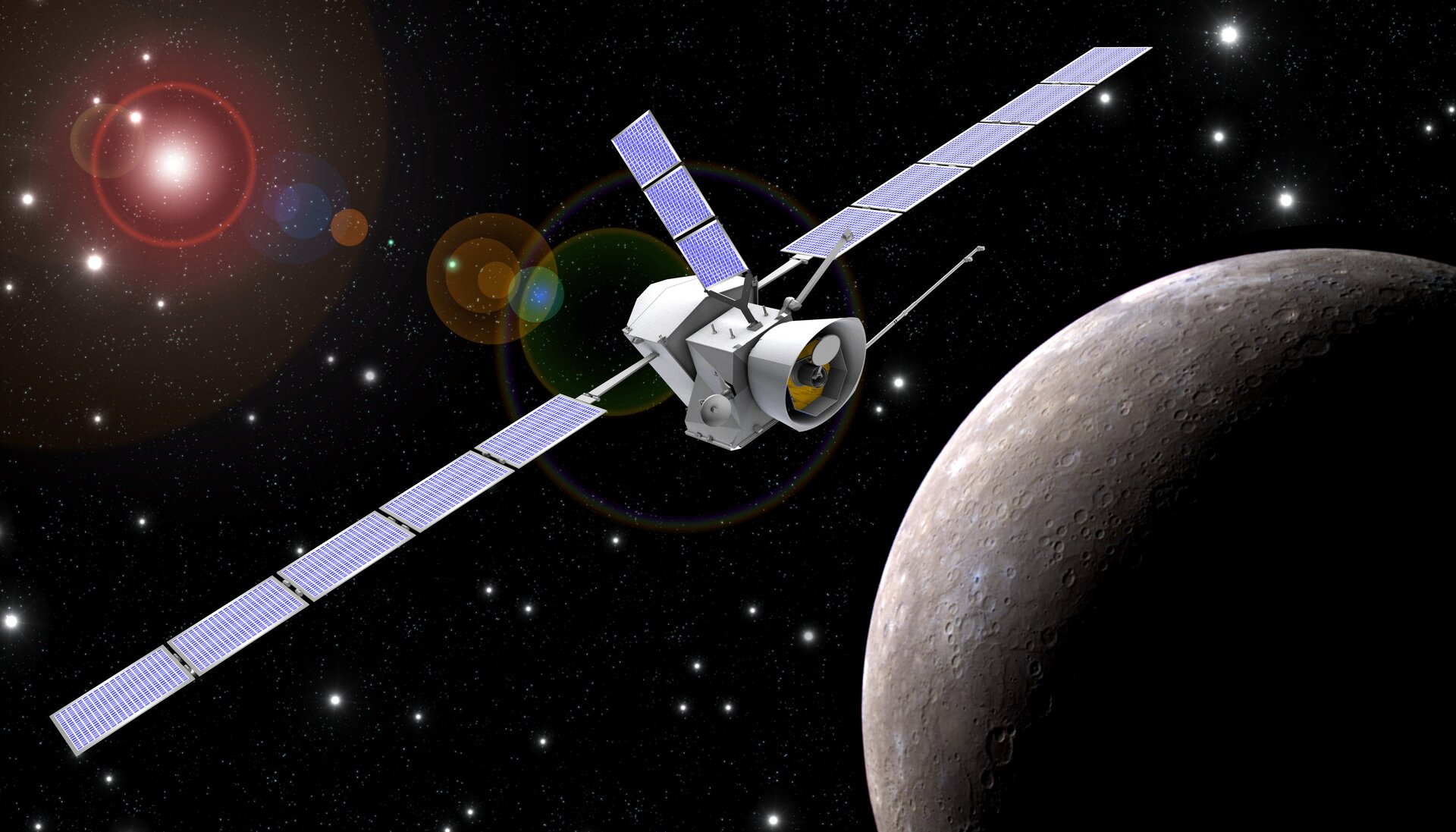 For BepiColombo, ESA has had to extend the limits of existing design standards and develop altogether new design concepts as well. How to begin building a spacecraft that needs to endure sunlight 10 times more intense than in Earth orbit, with surfaces hotter than a kitchen hot plate – high enough, in fact, to melt lead?

Back in late 2000, when the mission was first selected, no-one knew for sure.

1. Achieving a close-up view of Mercury

BepiColombo will be the third mission to visit the innermost planet after NASA’s Mariner 10 in the 1970s and the current Messenger.

But BepiColombo will be taking a much closer look than its predecessors: Mariner 10 only flew past while Messenger has entered a highly-elliptical Mercury orbit. While MMO will also follow an elliptical orbit, the planet-mapping MPO will orbit much more tightly, coming as close as 400 x 1500 km from Mercury’s heat-radiating surface.

In certain orbital positions, when the orbiter comes between the Sun on one side and Mercury on the other, it will have to endure temperatures as high as 450°C.

“A considerable team of researchers was involved in making the mission feasible,” comments Jan van Casteren, BepiColombo Project Manager. “An exceptional amount of technology development and demonstrations has been needed across a variety of fields.”

Just reaching Mercury presents a major challenge: a new generation of highly efficient electric propulsion was required, capable of achieving the tens of thousands of hours of thrust needed to enter orbit.

3. How the spacecraft keeps its cool

Then comes the problem of thermal management, which drives the spacecraft design. Slice through MPO and you would see a complex labyrinth of heat pipes. Previously used on a variety of missions, these sealed pipes work like a closed-loop version of human sweat glands, containing liquid whose evaporation carries excess heat from MPO’s sunward-side to radiating plates facing deep space. The liquid then condenses, allowing the process to begin anew.

The heat pipe concept helps keep MPO’s interior within room temperature. What was new was the 2 x 3.6 m size of the radiator, and the operational constraints it faced: “Its radiating plates must remain cold and shaded for it to work,” explains Ulrich Reininghaus, BepiColombo Spacecraft Development Manager.

“If they ever come into sustained contact with sunlight, or the infrared radiation emitted from Mercury’s surface then they would stop working.”

The mission had to develop a unique set of coated louvres that prevent the radiator ‘seeing’ the hot planet below while not preventing its own radiation escaping to cold deep space.

Expelling internal heat only goes so far, however; much better if it never makes it inside the spacecraft at all.

The real technical challenge has been finding new materials for everything on the outside of the spacecraft in particular – including antennas, the solar array and its associated Sun-tracking sensors and mechanisms and again the radiator and protective multi-layer insulation (MLI) – which would be able to withstand the Sun’s tenfold increase in brightness and associated temperature extremes.

“We began a critical materials technology programme for BepiColombo at the start of 2001,” comments Christopher Semprimoschnig, head of the Materials Space Evaluation and Radiation Effects Section of ESA’s Materials and Components Technology Division.

“We’ve kept busy for approaching a decade, gradually qualifying materials. It’s been a huge challenge because we had no previous experience of such a harsh environment. The closest we ever came was with Venus Express, though that meant handling two solar constants rather than 10.”

ESA’s Materials and Processes engineers were involved because they had a good understanding of what materials could be candidates, as well as of related fields that might offer useful ‘spin-in’ technologies, such as protective coatings on jet engine turbines.

It took years to develop the laboratory facilities required for testing, however, adapting existing facilities wherever possible. “When you increase the light and heat intensities you are operating with 10 or 20 times compared to before, then failures can happen,” Christopher says.

“We had to deal with melted lamp holders, melted reflectors, but we gradually managed to build some representative simulation chambers like our Synergistic Temperature Accelerated Radiation (STAR) facility.”