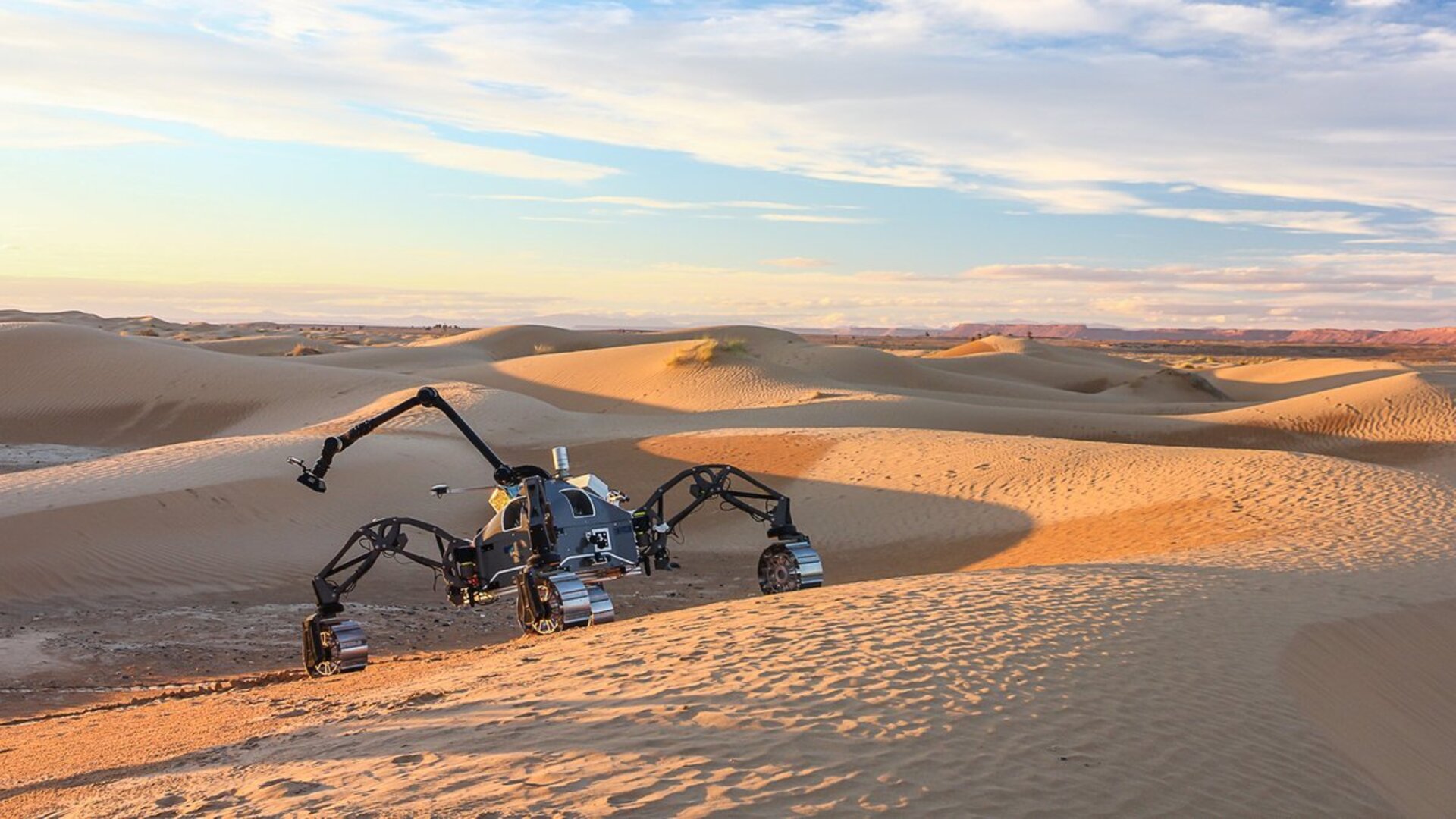 This marked the end of the first phase of the strategic research cluster on space robotics technologies, a scheme funded by the European Union’s Horizon 2020 programme.

The cluster is coordinated by the PERASPERA Ad Astra (Latin for ‘to the stars through hardships’) project, which is a partnership of Italy’s ASI space agency, France’s CNES space agency, the DLR German Aerospace Center, Spain’s CDTI technology agency and the UK Space Agency, UKSA, coordinated by ESA.

The venue for the field test – organised by Germany’s DFKI Robotics Innovation Centre – was a site served by the Ibn Battuta Centre, near Erfoud on the northern edge of the Sahara Desert. The wind-blown desert environment was selected by the EU’s Europlanet Research Infrastructure as a good match for Mars, and many others agree: the teams ended up sharing the location with a Hollywood feature film crew and Chinese documentary makers.

“What this kind of field test gives you is the proof of the pudding that your design is working well, even in some of the most challenging environments we can imagine,” explains Gianfranco Visentin, head of ESA’s Automation and Robotics section.

“Lab testing of the hardware we design doesn’t take account of the variability nature brings, from the light of the sky to the shape of the landscape, the texture and colours of the sand and rock. Operating outdoors in this way proves that our systems work in much more complex and elaborate settings than can ever be simulated.

“To give an example during this field test, the very smoothness and homogeneity of some of the big sand dunes proved difficult for computer vision algorithms to navigate, because they are based on identifying features based on difference, so they started to behave in unexpected ways we haven’t seen before.

“Our excellent results also included some good successes: the SherpaTT rover managed a 1.3-km journey on an entirely autonomous basis, while its autonomous science element triggered a scientific acquisition on its own, unprompted: it spotted some strange shaped stones then asked the main planner to move into a better position to take more images.

“This is important for the future, when there will be many more rovers going to Mars and they’ll be moving hundreds of metres per day. There won’t be schools of analysts to scrutinise every image – intelligent rover systems will be needed to detect what is interesting and send it back to Earth.”

As an essential contribution before testing began, ESA flew a drone to map the location, producing digital elevation models down to a resolution of 4 cm. This ‘ground truthing’ was needed to compare rover data with observed reality.

The combination of ESA’s map and the data collected by the different rovers constitutes the largest analogue test dataset ever made and it will be used to validate algorithms for ESA’s own activities.

The field test included participants from Germany's DFKI and DLR Institute of Robotics and Mechatronics, Space Application Services in Belgium, Magellium and the Laboratory for Analysis and Architecture of Systems, LAAS, in France, GMV in Spain, Kings College London and Airbus in the UK.

PERASPERA is set to move to a new phase, building on the results demonstrated in the field test, culminating in a space mission to demonstrate orbital robotics around 2023.