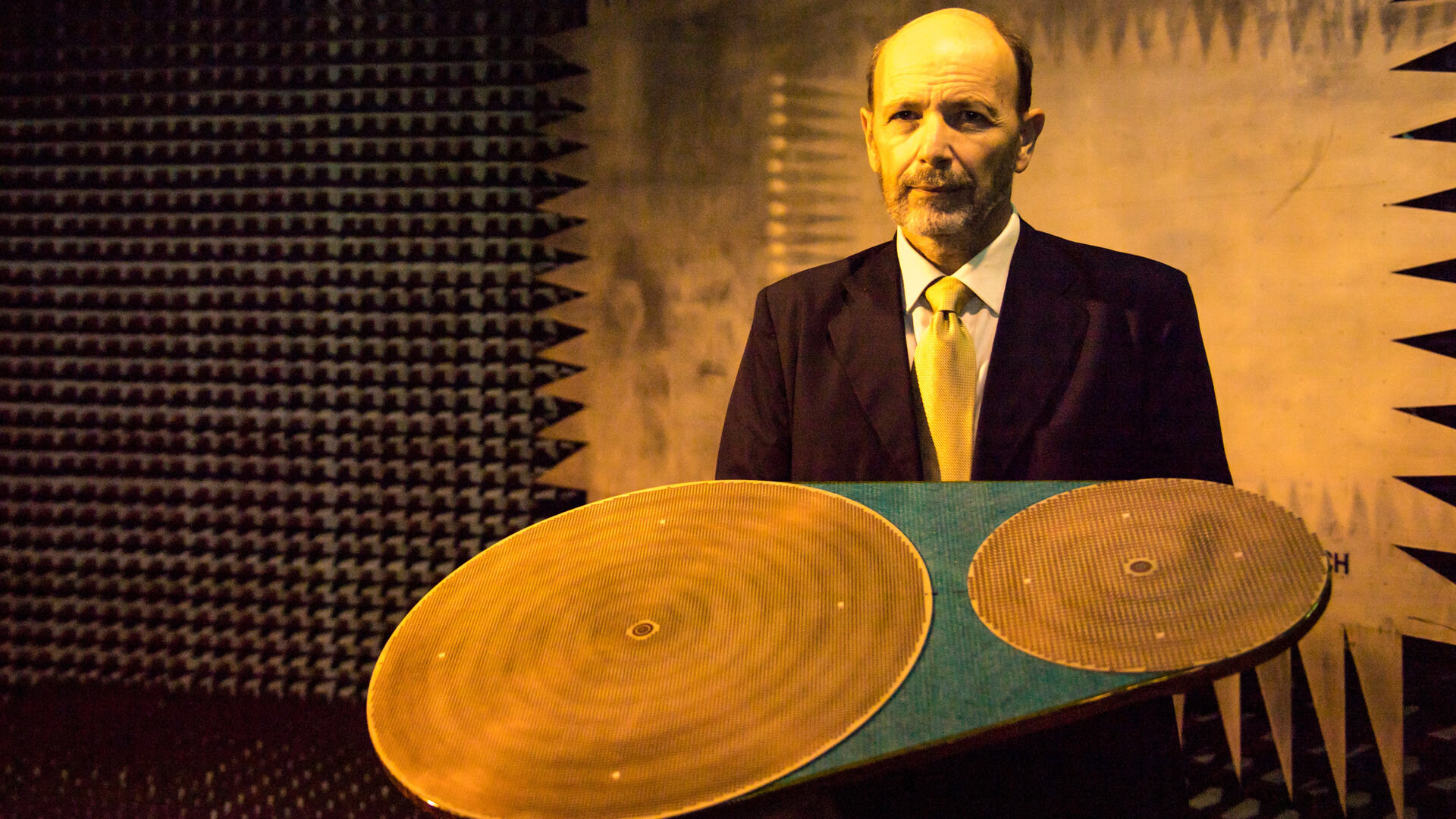 A traditional antenna, with a curved reflector dish plus feed horn, is one of the most distinctive elements of a spacecraft – and often among the most bulky. However the new technology we have developed allows us to design and build antennas with equivalent capabilities, but in two instead of three dimensions. The result is a flat antenna that is much lighter and easier to accommodate on a mission, while doing the same job as a curved antenna.

It’s called ‘modulated metasurface’ technology: electromagnetic radiation is influenced not by the curvature of the antenna surface but through careful tailoring of the surface itself. Thousands of small metal patches of different sizes and orientations are arranged on top of a dielectric layer across the face of the antenna, through which EM radiation is fed through a single central feeding point.

A good comparison is the way water flows along the skin of dolphins: there are within it very tiny ridges that guide the water to reduce the drag and allow the dolphin to swim much faster. Another analogy might be a hologram, where two-dimensional interference patterns embedded in glass gives the appearance of three dimensions as light is shone on it. 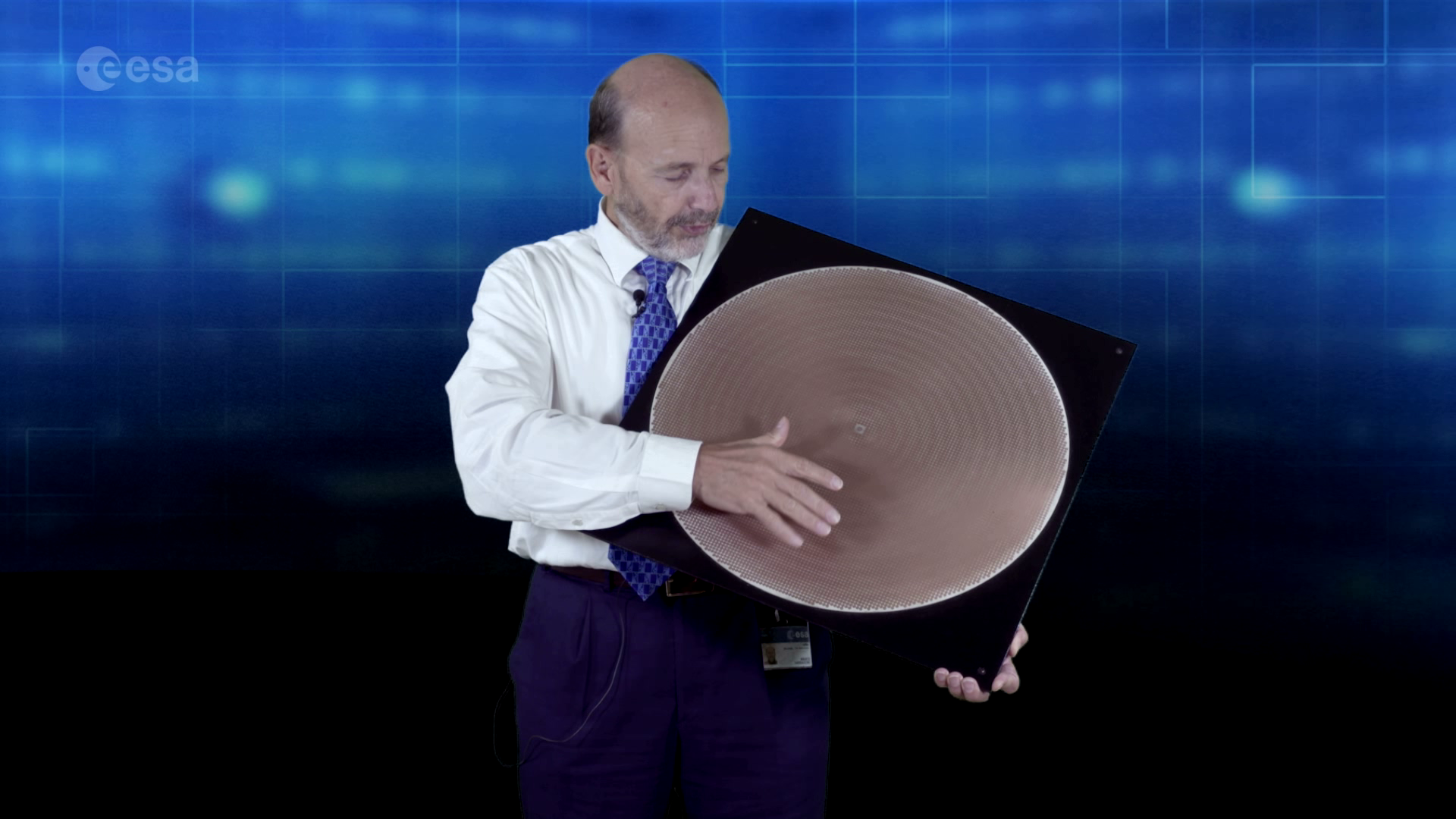 ESA and the space sector are in the lead in this technology: the idea was originally brought to us by the University of Siena in Italy about ten years ago (who have since spun off a company highly involved in modulated metasurfaces with the University of Florence, called Wave Up). So we worked on it with them, looking on making  the concept usable, and develop an initial prototype. The result ended up quite close to our initial mathematical models, within half a decibel or so.

The work was quite inventive, and we ended up applying for a patent together with the Siena team – a standard ESA policy to ensure new technologies are safeguarded for the use of European industry. A  more recent paper detailing further developments won the prestigious Sergei A. Schelkunoff Award of the Antennas and Propagation Society of the Institute of Electrical and Electronics Engineers (IEEE) for 2016.

our next step is to pre-quality the design for space

The modulated metasurface antenna patches can be rearranged in such a way to meet nearly any desired focusing, polarisation and direction. While standard antennas are pretty complicated to build, involving a lot of technological processes and skill to achieve the desired curvature and alignments, down to fractions of a millimetre, our antennas are essentially simply printed circuit boards.

All the complexity is shifted from manufacturing to the design side – not so long ago designing these surfaces would have been impossible, because the computational power required was not available. There’s a lot of potential for standardisation, and reuse by different missions without the need to requalify the antennas each time – their thermal and mechanical behaviour would be the same, only the layout of elements on the surface would change.

Having developed the initial prototypes through TRP, our next step is to pre-quality the design for space through GSTP. We have a deadline for development, because a modulated metasurface antenna has been baselined for ESA’s proposed Asteroid Impact Mission, which has to lift off in October 2020 to make its launch window to the Didymos asteroid pair.

It will serve as AIM’s main high-gain X-band antenna, returning unique scientific data from millions of kilometres away from humanity’s first mission to a binary asteroid system.