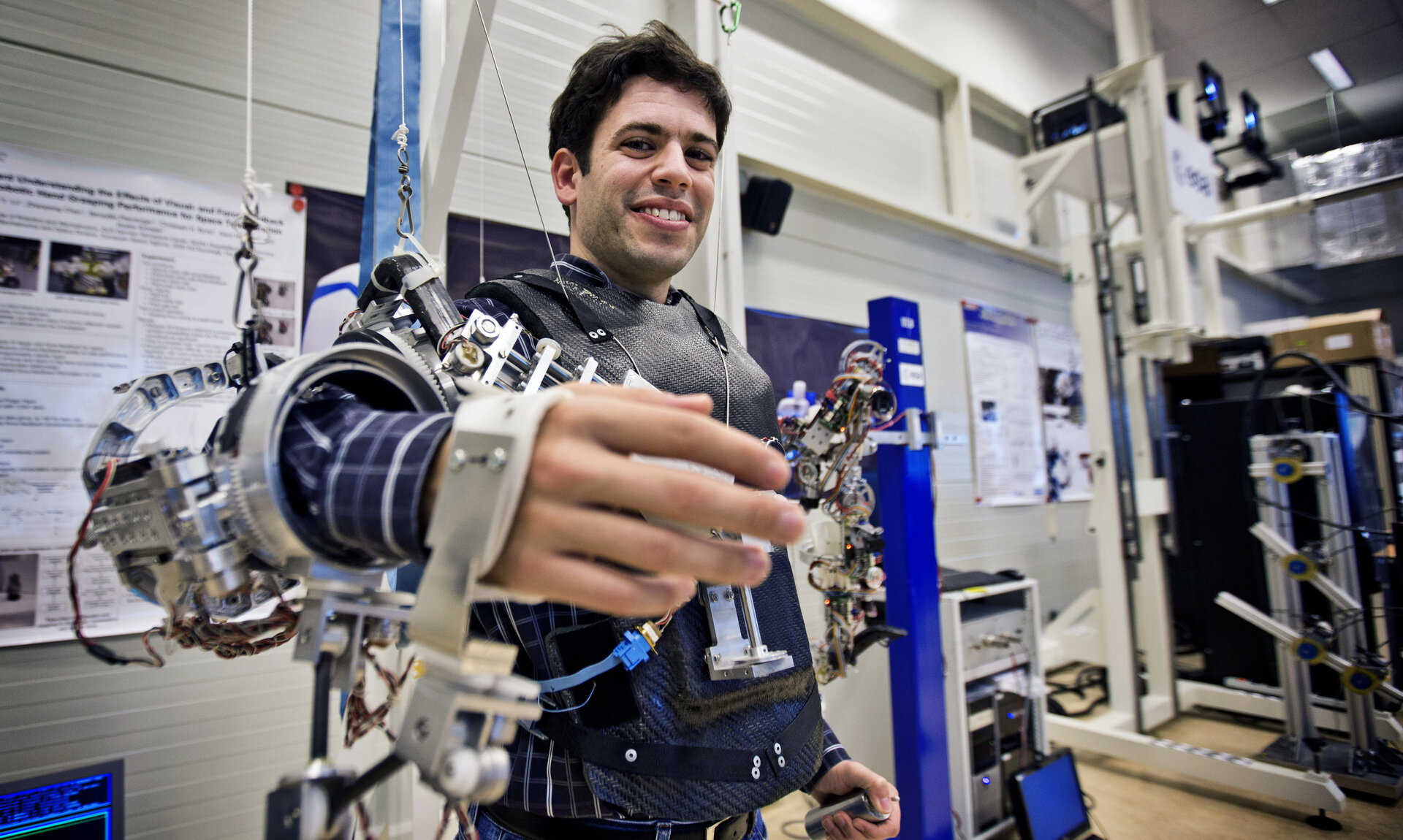 By comparison to other ESA labs tasked mainly with technical testing, the Lab has its focus firmly on fundamental research and development, adopting an informal ‘startup’ culture. Collaborating with a range of partners across the fields of telerobotics, mechatronics, haptics and human-robot interaction, the Lab has quickly become recognised as a leading authority in this fast-moving domain.

Its pre-development and demonstration of critical technologies is a means of supporting future spaceflight projects in support of coordinated exploration endeavours by international space programmes as well as fostering European industrial capability.

The Lab actively oriented towards working with external partners. Its team is equipped for the rapid development of hardware and software systems, responding on a rapid turnaround basis to customer needs.

This includes the design and supply of specialised customer-furnished items to industry for specific projects or in-the-field testing, up to and including spaceflight. Collaboration with non-space partners is also feasible, such as the offshore or nuclear industries.

The Lab possesses ISO 9001 certification for research and development, which covers issues such as testing standardisation, analytical procedures and development and experimentation planning and documentation.

Reflecting the cutting edge nature of its work, much of the Lab’s specialised equipment has been designed inhouse and then variously constructed in the same manner or with some out-of-house building with industrial partners. Other equipment has been customised as needed from commercially available products.

Examples of the former include a series of exoskeletons used for testing. An initial EXARM ergonomic exoskeleton prototype possessing 16 degrees of freedom has been joined by the SAM (Sensory Arm Master) Exoskeleton – a fully actuated force feedback haptic device featuring position and torque sensors on each of its seven joints – while the X-Arm-2 Exoskeleton master device is an ergonomic fully-actuated haptic master device for force reflection to the right arm of its operator. This fully haptic exoskeleton features 14 joints equipped with joint position sensors, eight of which are additionally equipped with custom-built high-resolution torque sensors, motor-gear units and input/output position sensors.

All this equipment is housed in a single large room, facilitating group interaction, with network-linked work stations. The Lab network runs independently of the rest of ESTEC, possessing independent links to the outside world for rapid connectivity in order to minimise the effects of latency – a key research topic. All the software the Lab employs is also designed and built inhouse, giving the team a rapid capacity to set up computational systems, programming interfaces and tools for test purposes.

In addition a small class 100 000 clean room is located next to the laboratory, for the integration and testing of flight hardware. Currently this is used for the Meteron International Space Station technology demonstration project.

The Telerobotics & Haptics Lab is made up of a scalable team of currently 11, led by one ESA staff member, three contractors with the rest being Masters or PhD candidates from the Lab partner, the Delft University of Technology.

The Lab has built up strong links with a variety of external partners. These include the Robotics Department of TU Delft – from where postgraduate Lab members are recruited and where the Lab head Andrè Schiele has an Associate Professorship – as well as the
Institute of Robotics and Mechatronics of the DLR German Aerospace Center, which has a Memorandum of Understanding with the Lab that governs their cooperation.

The Lab is working in close collaboration with research centres worldwide on an experimental activity called Meteron (Multi-Purpose End-To-End Robotic Operation Network). Various robotics centres will be interconnected so their systems can be controlled from the microgravity environment of the International Space Station, validating future human-robotic control architecture.

Meteron is being carried in partnership with several NASA centres – the Johnson Space Center, Ames Research Center and the Jet Propulsion Laboratory – as well as DLR and Russian partners including Roscosmos, the RTC Institute St. Petersburg and Energia.

The Lab is responsible for the definition, implementation and conducting of the telerobotics experiments plus haptic devices, controllers and full-onboard control station for the International Space Station. An initial piece of experimental hardware, the Haptics-1 experiment created by the Lab, is due for delivery to the Station in 2014.

Linked to Meteron, the H-Haptics (‘Human Haptics’) Programme is a Dutch-funded Framework Programme (STW – Perspectief) for the development of advanced humanmachine interface technologies for space and terrestrial applications.