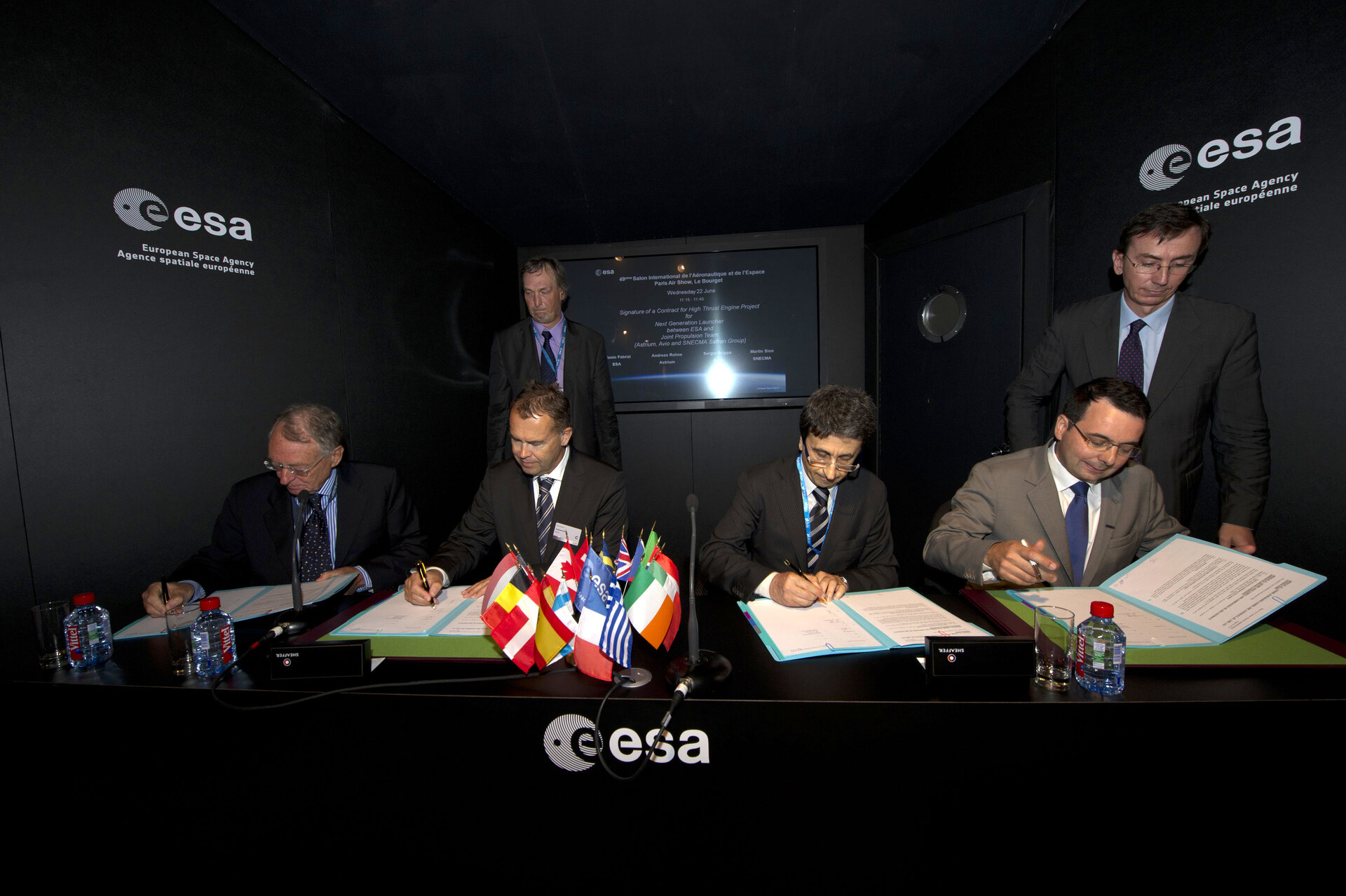 The new main engine to power Europe’s successor to its Ariane 5 space launcher was brought a step closer today when ESA signed a €60 million contract with a propulsion consortium at the Paris Air & Space Show.

ESA is preparing the NGL Next-Generation Launcher to meet Europe’s institutional needs and safeguard its guaranteed access to space into the long term, ensuring it will continue to have effective and economic launchers at its disposal.

The work is being performed under the Agency’s Future Launchers Preparatory Programme (FLPP), which is identifying and studying new launch vehicle concepts and anticipating the technologies to make them possible.

Many configurations have been screened and studied on the way to the current four, using two and three stages to orbit, different types of liquid and solid propellants and a cryogenic upper stage.

A key development for Europe’s next-generation launcher is its main engine.

One objective of FLPP is to enable an informed decision to be taken later in the NGL programme, through studies and integrated demonstrators.

Liquid propulsion is promising for the main stage because of its flexibility, growth potential and track record.

One of the candidates, the liquid-propellant High-Thrust Engine (HTE) demonstrator, will help to understand the key technology issues while developing European competence in propulsion system integration and advanced technologies.

Today’s contract signing with the Joint Propulsion Team – a consortium of Astrium GmbH, Avio SpA and Snecma (Safran Group) – moves HTE to the next phase: the engine’s preliminary design reviews.

It follows on from a contract that in 2007 began integrating key European competences of 14 companies in nine countries, for a total amount of €100 million.

“It is now heading towards the preliminary design review planned for mid-2012. Hot-firing tests will be performed around 2014, which could also evolve towards a pre-development phase.”

“Building on the excellence and knowhow of the European propulsion industrial team, this contract allows the project to make a significant step in advanced liquid propulsion capabilities,” added Antonio Fabrizi, ESA Director of Launchers.

“It will also enable a shared assessment of our options and the different technologies to be used for Europe’s next-generation launcher, to be operational by 2025 or earlier.”