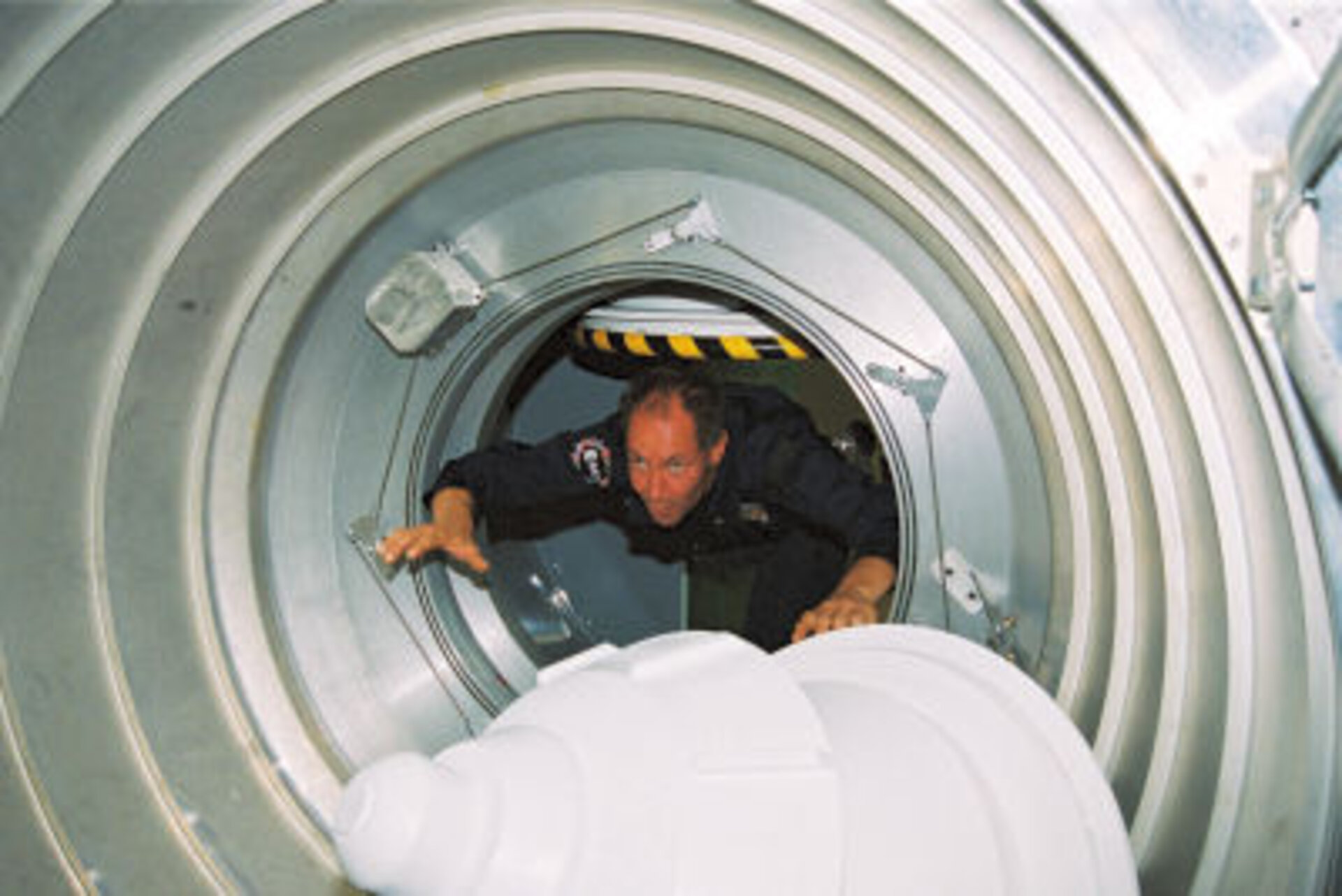 Robert Kluge moves smoothly through the inertia of the water pulling himself along the wire, which serves as a pathfinder in the vast neutral buoyancy tank. Kluge and four of his colleagues - alongside a squad of rescue-divers - hover with the help of air-inflated metal-vest in a state of as-close-as-it-gets-to weightlessness, while Werner Schäppi fixes the solar arrays to the large underwater-dummy of a part of the International Space Station (ISS).

But Robert Kluge is not an astronaut. Neither is Werner Schäppi. They are businessmen, both working in high profile management positions. But they have taken the unique chance the European Space Agency is offering: The ESA Space Training, an intensive astronaut training session using the actual facilities European astronauts work with to prepare for their stay on the ISS.

Participants undergo a two-day intensive course learning how to operate a spacecraft, perform experiments or assemble huge elements into an ISS replica in the state-of-the-art facilities of Cologne's European Astronaut Centre.

Whoever might think this equals an attraction in an amusement park is wrong: the Space Training is hard facts education and experience about space. There is not only the active training part to be memorised - learning about the theoretical procedures is also required.

The preparation kicks off a week before the training actually starts: participants receive various background documents and an overview of the ISS to study in advance.

The training session begins with an explanation of the medical implications on human presence in space. The first real action is an exercise on an ergometer and a rotating chair, as well as a simulation of hypoxia, which is an absence of oxygen reaching living tissues. For this, the participants are placed in a barochamber, a confined module, in which different levels of pressure and oxygen concentration can be experienced.

Following that, space trainees will undergo a hands-on training with the Automated Transfer Vehicle (ATV), Europe's cargo spacecraft. After that, they will experience Aerotrim - special rotating equipment used by astronauts in their training.

Day two starts with an overview of extra-vehicular activity (EVA), to prepare you for that day's work - assembling the ISS using full-scale models in a huge neutral buoyancy tank (a 3,74 million litre swimming pool, which is about four times an Olympic-sized swimming pool.)

This will be followed by an introduction to diving. You will perform an actual dive in the tank used by astronauts to prepare for space walks. Your mission: learn to attach Solar Arrays (the huge solar panels used to supply the Station with power) to the International Space Station.

As you float in the water, manipulating the panels and tools, you will get as close as it's possible to get to an actual assembly space walk. You will leave the EAC not only with the unique experience, but also with solid proof of your achievements: a certificate of your space fitness, pictures of your feat underwater, plus your personal training overalls, identical to those used by astronauts. And the certainty that you have gone where only a handful of handpicked European astronauts have gone before.