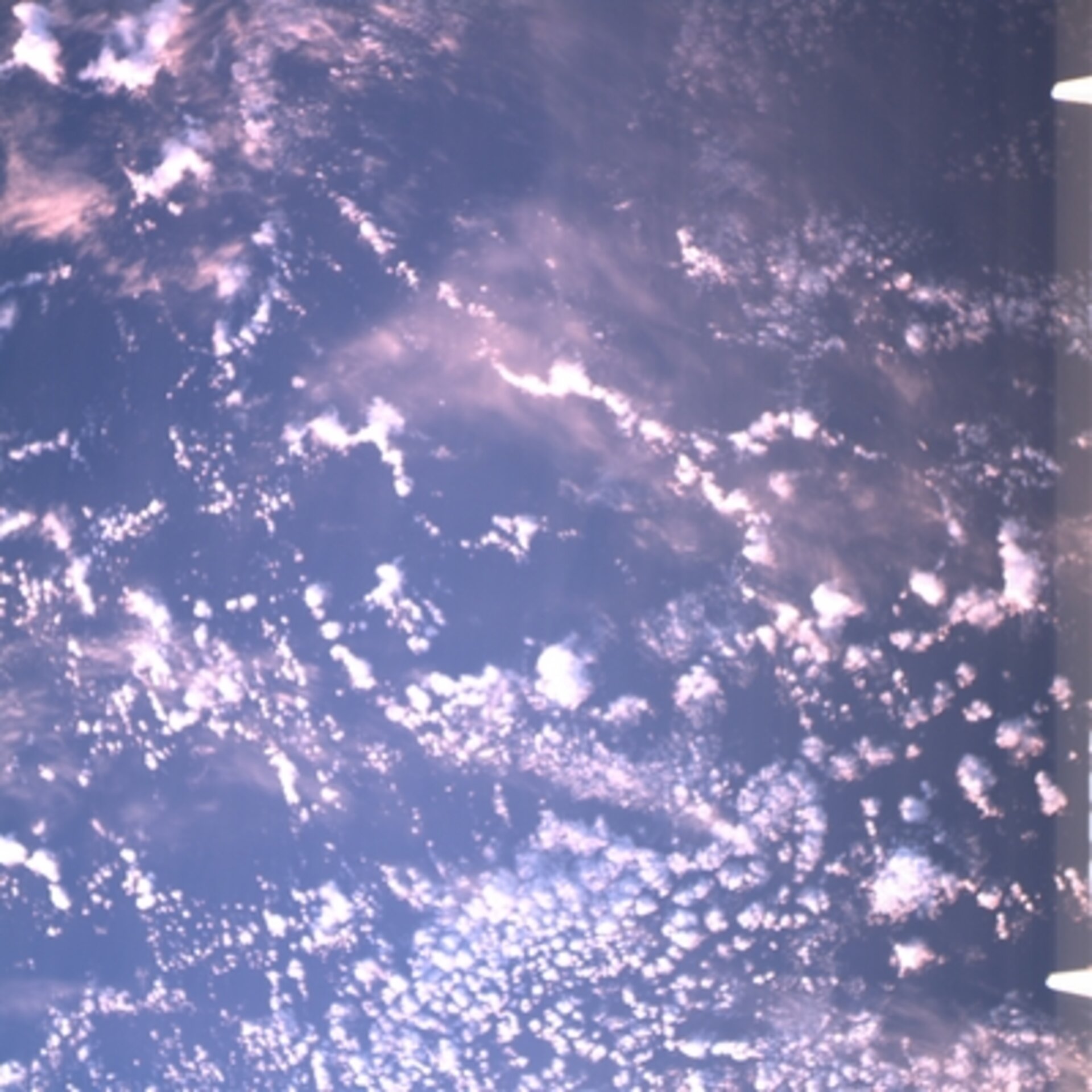 One of the experiments housed on the European Columbus laboratory’s external platform is an automated eye in the sky known as the Earth Viewing Camera (EVC). Now, after several weeks of troubleshooting by the EVC team in the Netherlands, the first pictures from the orbiting camera have arrived safely back on Earth.

The initial image, showing a dimly illuminated cloud-covered region was successfully downloaded on 6 March. A second picture – the first to be produced on command from the ground – was taken soon after dawn on 7 March and shows a scattering of white and pink clouds close to the Aleutian Islands in the north Pacific.

“It was really exciting to see the first image arriving from space after the long period of developing the camera and testing it in orbit,” said Massimo Sabbatini, ESA Principal Investigator for the EVC. “This success would not have been possible without the major contribution of Carlo Gavazzi Space and the hard work of the integration and operations teams at the European Space Technology and Research Centre (ESTEC) in the Netherlands.”

“We are just starting to experiment with the various camera parameters to adjust for the vast range of lighting conditions we encounter. That’s why the second picture is slightly blurred,” explains Sabbatini. “The ISS is travelling at about 7 km per second, so we have to adjust the exposure time to compensate for this rapid motion. At that speed the camera moves over hundreds of metres on the ground in a matter of milliseconds.”

The camera is intended to be a valuable resource for public outreach and education. Sabbatini says, "We hope to encourage teachers and students to use the EVC as a tool for studying all aspects of Earth observation from space – imaging, telemetry, telecommunications links and orbit predictions. We are also hoping to receive requests for images of particular regions over which the ISS is passing.”

The story of the EVC began in 2003, when the company Carlo Gavazzi Space of Milan, Italy, approached ESA with a proposal to fly a digital camera as a low cost payload on one of the external platforms on Columbus. ESA and Carlo Gavazzi Space signed an agreement in March 2004 whereby each partner would provide half of the required funding for the development of the camera.

The EVC points continuously at a fixed angle toward the Earth. The camera weighs 7.8 kg and measures 0.4 x 0.28 x 0.16 m. It uses a commercial, off the shelf, sensor provided by Kodak, with a 2k x 2k detector. It is able to capture colour images of the Earth’s surface that cover an area of 200 x 200 km.

The images are received in Europe by the Columbus Control Centre at Oberpfaffenhofen in Germany and then forwarded to the ESA User Support Operation Centre in the Erasmus Centre at ESTEC. In the future, the EVC image acquisition process and exploitation will be coordinated from the EVC User Home Base, also located at the Erasmus Centre.

EVC is part of the European Technology Exposure Facility (EuTEF) installed on the European Columbus laboratory’s external platform during a spacewalk on 15 February 2008 by NASA astronauts Rex Walheim and Stanley Love.

Located on the starboard side of the International Space Station, Columbus sweeps around the Earth once every 90 minutes. Since the Station’s orbital path is inclined at about 52 degrees to the equator, the Earth Viewing Camera has the potential to take pictures of anywhere on the Earth’s surface from England to the southern tip of South America. This includes almost all of the densely populated parts of the world.