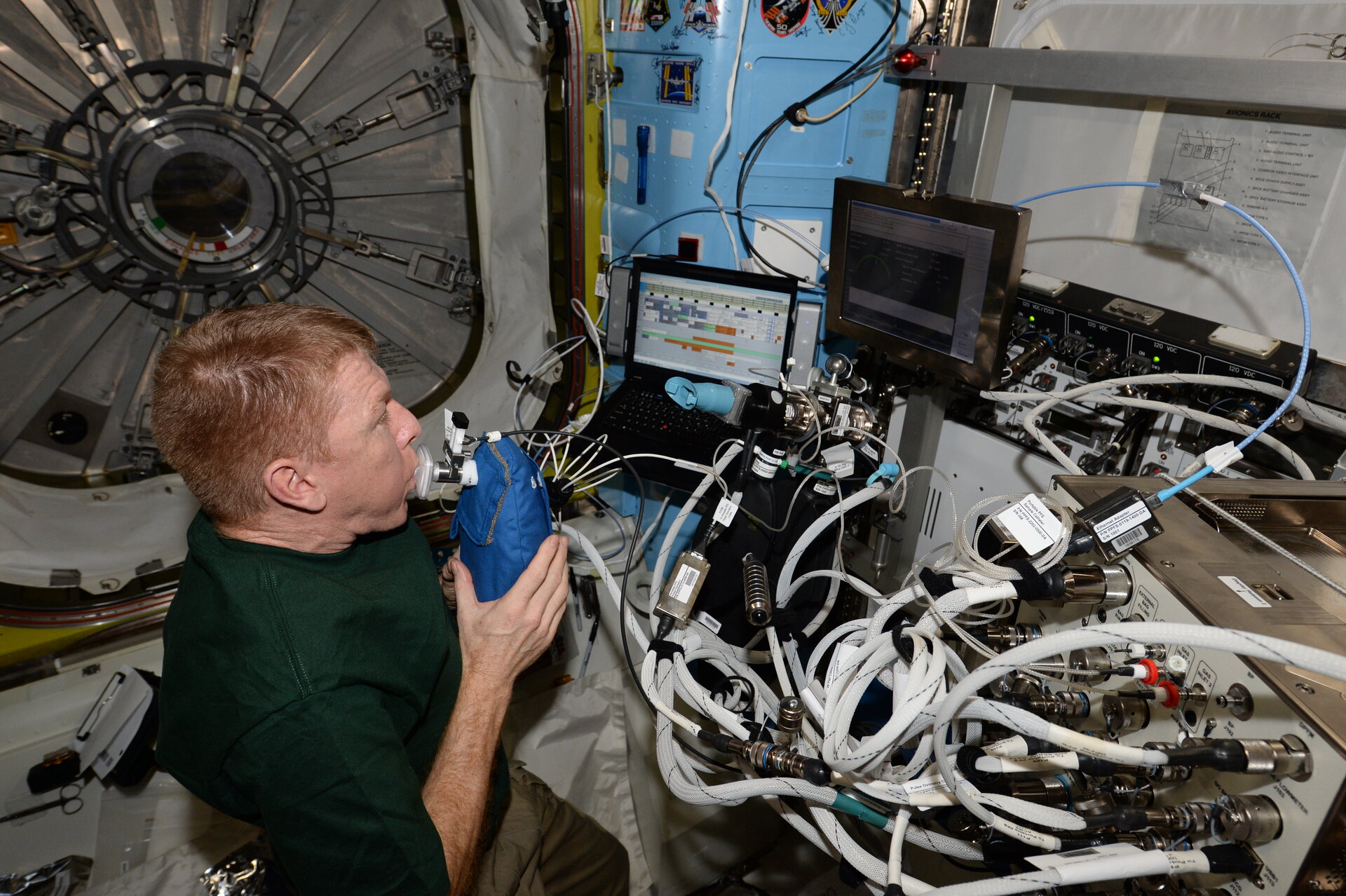 For future exploration of our Universe space physicians are always looking for easier ways to monitor astronaut health. There are concerns that dust that could be dangerous to human health on other planets or our Moon, for example. Apollo lunar astronauts said that the Moon dust was all-invasive, clinging to equipment, clothes and getting into their spacecraft.

To test nitric oxide monitoring in space and assess its value as a diagnostic tool, ESA astronaut Tim Peake and other astronauts wore a portable gasmask that analysed the molecule as he breathed. The experiment was performed at normal Space Station pressure but also at a half-pressure in the Quest airlock to simulate the atmosphere on a lunar base.

This was the first time that Quest was used for scientific research, its main purpose until then being for spacewalks. ESA astronaut Samantha Cristoforetti began the experiment during her mission in 2015.

Previous ESA experiments have led to improved hospital equipment and diagnoses. The Airway Monitoring experiment added to knowledge of using nitric oxide in our breath as a diagnostic tool. The experiment also paved the way for sending astronauts to the Moon and beyond, where they would have to live healthily self-sufficiently.

Humans are adaptable beings. Wear glasses that turn your view of the world upside-down and within two weeks your brain will have adapted to the topsy-turvy world.

The research is providing scientists on Earth clues where to look in the brains of people who suffer from disorders based on previous traumatic experiences such as vertigo. 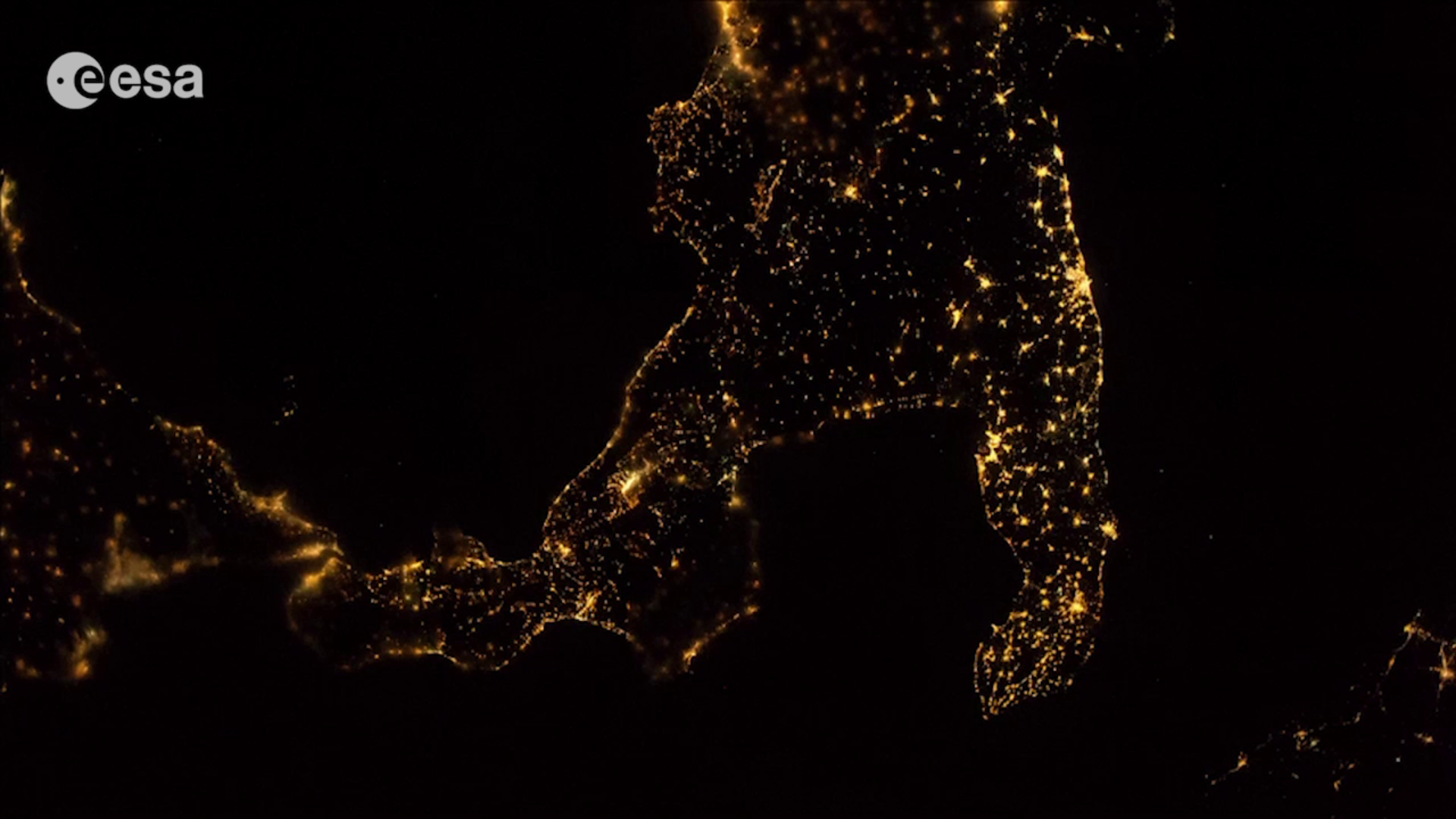 Night flight over Italy and Egypt
Access the video

Our bodies know roughly what time of day it is, making us feel sleepy at night. Our biological clock follows Earth’s 24‐hour cycle but reacts to sunlight. In our modern world many people live outside of the natural cycle, staying up late or working night shifts. As a result, problems with sleeping are common but not fully understood.

Tim experienced 16 sunrises and sunsets every day on the International Space Station as it circled Earth, making it a unique place to study circadian rhythms. No other place near Earth offers 90-minute days that put a serious strain on people’s body clocks.

How his biological clock reacted is of interest to the next generation of astronauts as well as people on Earth who work irregular hours, such as doctors and emergency workers. The data will be shared and compared with isolation studies, such as ESA’s Mars500, and in places that experience the opposite to short days, such as in Antarctica where people on the research base Concordia live four months without sunlight.

The results will help in finding out how to rest effectively and be alert when most needed, a skill that many would benefit from, especially astronauts who need to be ready for spacecraft dockings at irregular intervals.

Scientists want to know how to feed people on future missions, such as a journey to Mars. An 18-month mission to the Red Planet requires planning the accommodationof all hardware and supplies down to the kilogram. This experiment set out to ask: how much food does an astronaut need for 18 months in space? Imagine an astronaut running out of energy during a critical moment such as a Mars landing.

This experiment looked at the energy expenditure of astronauts to plan adequate but not excessive food supplies. It was a complex experiment and many astronauts were involved. ESA astronauts André Kuipers, Luca Parmitano, Alexander Gerst, Samantha Cristoforetti and others took part in this experiment on their missions before Tim.

The space part of this experiment lasted 11 days. Space food was eaten from a special package on the first two days and everything was registered with bar codes and on written forms to know exactly what Tim ate. He drank water with deuterium isotopes and regularly collected water and urine samples. The isotopes allowed the scientists to examine how Tim’s energy levels changed over the 11-day period.

A mask measured the amount of oxygen Tim absorbs for 20–50 minutes at a time during the second day to deduce energy consumption. All movements were recorded during the experiment using an activity monitor.

Living in space is a wonderful experience but it can take its toll on an astronaut’s body: half of astronauts return sick from a mission to the International Space Station.

The Immuno-2 experiment took a holistic approach to consider how stress affects our immune system. Using brain scans, monitoring breathing and looking at samples from Tim’s hair, the researchers hoped to understand how living in stressful conditions affected his immune system.

Living in microgravity leads to the loss of muscle mass, function and motor control. By taking samples of Tim’s soft tissue, the Muscle Biopsy experiment looked for the root of the problem of maintaining muscle mass in space. The European astronaut provided feedback on how his muscles performed before and after his flight.

This experiment used regular questionnaires to investigate the headaches experienced by astronauts. Tim filled in a questionnaire regularly to study the number of headaches he had on the Station. The researchers are looking to understand the causes of headaches in space. Are they linked to the fluid movement towards the head in microgravity? Is there a link between headaches on the ground and in space?

ESA astronaut André Kuipers was the first test subject during his mission in 2012, followed by ESA astronauts Luca Parmitano, Alexander Gerst, Samantha Cristoforetti and Andreas Mogensen. The headaches are classified and analysed according to the International Classification of Headache Disorders.