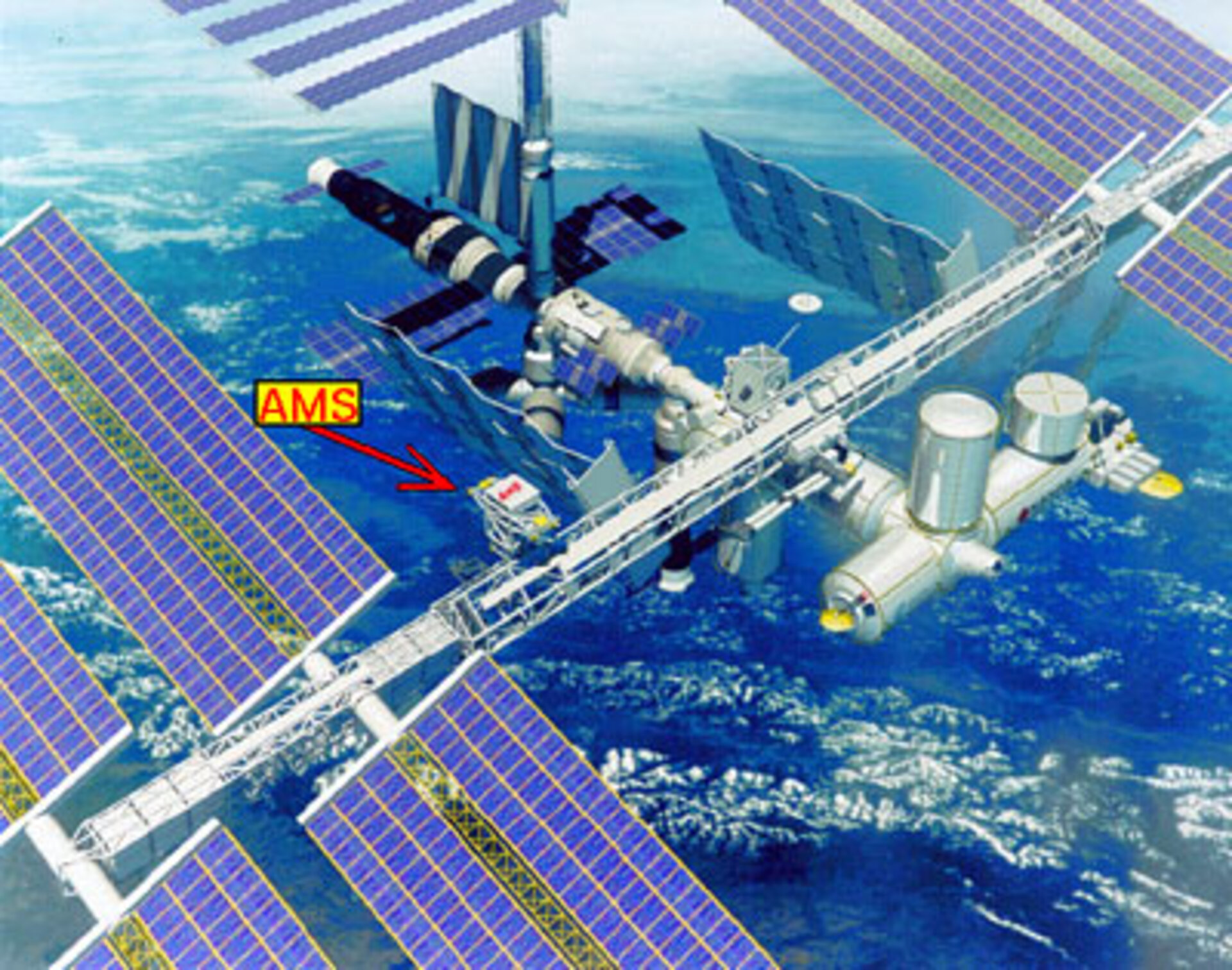 The unique particle physics detector known as the Alpha Magnetic Spectrometer will soon arrive at ESA’s ESTEC facility in the Netherlands to undergo final testing in Europe prior to being shipped to the Kennedy Space Center in the spring of 2010 and its launch to the International Space Station on the STS-134 Shuttle Endeavour mission in July 2010.

This mission will include ESA astronaut Roberto Vittori who is flying as a Mission Specialist under a bilateral agreement between the Italian Space Agency (ASI) and NASA involving the utilisation of the Italian-built Multi Purpose Logistics Modules.

The Alpha Magnetic Spectrometer will be installed on the main truss of the International Space Station after its arrival at the ISS in 2010. The almost 7-tonne spectrometer will be permanently active for at least three years in order to answer the most fundamental questions about the origin and structure of the Universe, through its search for antimatter and dark matter, and collection of information from cosmic sources emanating from stars and galaxies millions of light years beyond the Milky Way.

The International Space Station (ISS) obviously plays a key role in providing a long-term attachment point on its truss for the Alpha Magnetic Spectrometer and supplying all necessary power and data cabling in order to carry out such fundamental research. With the wide-ranging science facilities on the ISS, including the internal and external facilities of the Columbus laboratory, carrying out diverse research from solar studies to fundamental fluid physics, the station is providing many capabilities for furthering the boundaries of fundamental research.

The project is the culmination of 30 years of experience and research of a group of high-energy physicists led by 1976 Nobel Laureate Samuel C. C. Ting and Thomas Dudley Cabot Professor of Physics of the Laboratory for Nuclear Science at the Massachusetts Institute of Technology. Construction, integration, testing and operation of the Alpha Magnetic Spectrometer is carried out by an international team composed of about 600 physicists and 60 institutes and organisations from 16 countries (including nine ESA Member States) and organised under an agreement between NASA and the U.S. Department of Energy.

The Alpha Magnetic Spectrometer detects high-energy particles using a huge superconducting magnet (filled with 2500 litres of super fluid helium) and six highly specialized, ultra-precise detectors. Data coming from the detectors will build a picture about the particles, identifying them by their mass, charge and energy in order to determine their origin. After the Alpha Magnetic Spectrometer first flew in space in June 1998 on the 10-day STS-91 Space Shuttle Discovery mission, this second incarnation of the spectrometer will search with an improved sensitivity sufficient to reach the edge of the expanding universe and resolve fundamental questions central to the universe’s origin.

After arriving at ESTEC from CERN in Geneva, where final assembly took place, the spectrometer will undergo thermal vacuum testing lasting up to 38 days, and Electromagnetic Compatibility/Interference testing lasting 7 days, with the complete test campaign covering three months. The thermal vacuum testing will take place in ESA’s Large Space Simulator, which will simulate the thermal/vacuum environment of Low-Earth Orbit. The main objective of the thermal test is the verification of the proper functioning of the detectors and thermal control subsystem under such conditions on the ISS. For some of the detectors this is the only chance before flight to operate under vacuum conditions. The magnet of the Alpha Magnetic Spectrometer will be charged during thermal testing.

“This is undoubtedly one of the most exciting and important missions given the impact it will have on furthering our knowledge of the formation of the universe,” said Simonetta Di Pippo, ESA’s Director of Human Spaceflight. “It is one more sign of the usefulness of the ISS as a science platform for both fundamental and applied research. Similarly to the ISS itself, the Alpha Magnetic Spectrometer is an excellent example of what international cooperation can achieve. In addition, I am very proud that the ESA/ASI cooperation is making it possible for an ESA astronaut to be a member of the Shuttle mission that will deploy the Alpha Magnetic Spectrometer. I look forward to the future impact that the technologies involved in the Alpha Magnetic Spectrometer will hold for future human exploration missions”.

The Alpha Magnetic Spectrometer will provide the first operational experience with a superconducting cryogenic magnet in space and greatly extend the knowledge base regarding superfluid cryogenic systems’ operation in space. These are enabling technologies for the potential use of magnetic shielding as a method of radiation protection during extended human space flight, as well as for space power and propulsion systems.