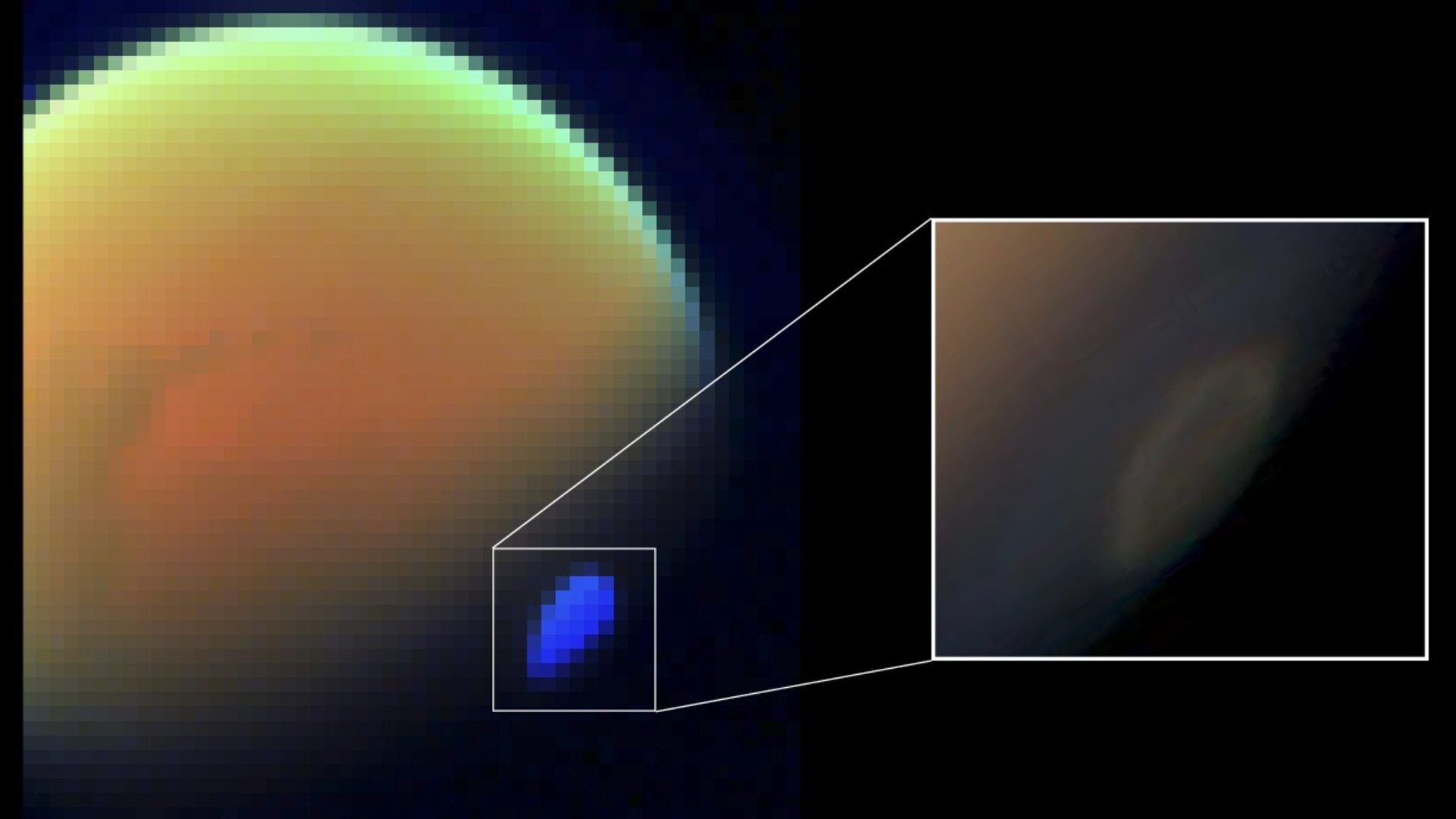 The international Cassini mission has revealed that a giant, toxic cloud is hovering over the south pole of Saturn’s largest moon, Titan, after the atmosphere has cooled in a dramatic fashion.

“The discovery suggests that the atmosphere of Titan’s southern hemisphere is cooling much faster than we expected,” says Remco de Kok of Leiden Observatory and SRON Netherlands Institute for Space Research, lead author of the study published in the journal Nature.

Unlike any other moon in the Solar System, Titan is shrouded by a dense atmosphere dominated by nitrogen, with small amounts of methane and other trace gases. Almost 10 times further from the Sun than Earth, Titan is very cold, allowing methane and other hydrocarbons to rain onto its surface to form rivers and lakes.

Like Earth, Titan experiences seasons as it makes its 29-year orbit around the Sun along with Saturn. Each of the four seasons lasts about seven Earth years and the most recent seasonal switch occurred in 2009, when summer transitioned to autumn in the southern hemisphere.

In May 2012, images from Cassini revealed a huge swirling cloud, several hundred kilometres across, taking shape at the south pole.

This polar vortex appears to be an effect of the change of season, with large amounts of air being heated by sunlight during the northern spring and flowing towards the southern hemisphere.

A puzzling detail about this swirling cloud is its altitude, some 300 km above Titan's surface, where scientists thought it was too warm for clouds to form.

“We really didn’t expect to see such a massive cloud so high in the atmosphere,” says Dr de Kok.

Keen to understand what could give rise to this mysterious cloud, the scientists turned to the rich data from Cassini. After careful scrutiny, they found an important clue in the spectrum of sunlight reflected by Titan’s atmosphere.

A spectrum splits the light from a celestial body into its constituent colours, revealing signatures of the elements and molecules that are present. The Visual and Infrared Mapping Spectrometer on Cassini takes spectra at many different points on Titan, mapping the distribution of the chemical compounds in its atmosphere and on its surface.

“The light coming from the polar vortex showed a remarkable difference with respect to other portions of Titan’s atmosphere,” says Dr de Kok. “We could clearly see a signature of frozen hydrogen cyanide molecules – HCN.”

As a gas, HCN is one of the molecules present in small amounts in the nitrogen-rich atmosphere of Titan. However, finding these molecules in the form of ice was very surprising, as HCN can condense to form frozen particles only if the atmosphere is as cold as –148ºC.

“This is about 100ºC colder than predictions from current theoretical models of Titan’s upper atmosphere,” explains co-author Nick Teanby from the University of Bristol, UK.

“To check whether such low temperatures were actually possible, we investigated a second set of observations from Cassini’s Composite Infrared Spectrometer, which allows us to measure atmospheric temperature at different altitudes.”

Unfortunately, no such readings were taken in 2012 at this cloud’s altitude, but the scientists looked at data from other dates, probing the atmosphere above and below the vortex.

These data showed that the southern hemisphere has been cooling rapidly, making it possible to reach the low temperature needed to form the giant toxic cloud seen on the south pole.

This fast cooling of the southern atmosphere may be a consequence of the atmospheric circulation, which has been drawing large masses of gas towards the south ever since the change of season in 2009. As the HCN gas becomes more concentrated, its molecules shine brightly at infrared wavelengths, cooling the surrounding air in the process.

Another factor contributing to this cooling is the reduced exposure to sunlight on Titan’s southern hemisphere.

“This surprising result shows how much we are still learning about Titan’s weather and the complex dynamics of its atmosphere,” says Nicolas Altobelli, Cassini–Huygens Project Scientist at ESA. “We can look forward to more fascinating discoveries from Cassini in the next few years, as it continues to monitor the seasonal changes on Saturn and its moons.”

The Cassini–Huygens mission is a cooperative project of NASA, ESA and Italy’s ASI space agency. Launched in 1997, Cassini arrived in the Saturn system in 2004 and is studying the ringed planet and its moons. The Huygens probe was released from the main spacecraft and, in 2005, parachuted through the atmosphere to the surface of Saturn’s largest moon, Titan.

Cassini’s initial four-year mission to explore the Saturn System covered the period July 2004 to June 2008, when Saturn and its moons were experiencing northern winter and southern summer. The first extended mission, called the ‘Cassini Equinox Mission’, was completed in September 2010. This included the spring equinox, on 11 August 2009, when winter was followed by spring in the northern hemisphere and summer was followed by autumn in the southern hemisphere.

A second extended mission, the ‘Cassini Solstice Mission’, will continue until September 2017. This will allow scientists to study the Saturnian system until after the next seasonal change, the summer solstice in May 2017, which will mean the arrival of northern summer and southern winter.