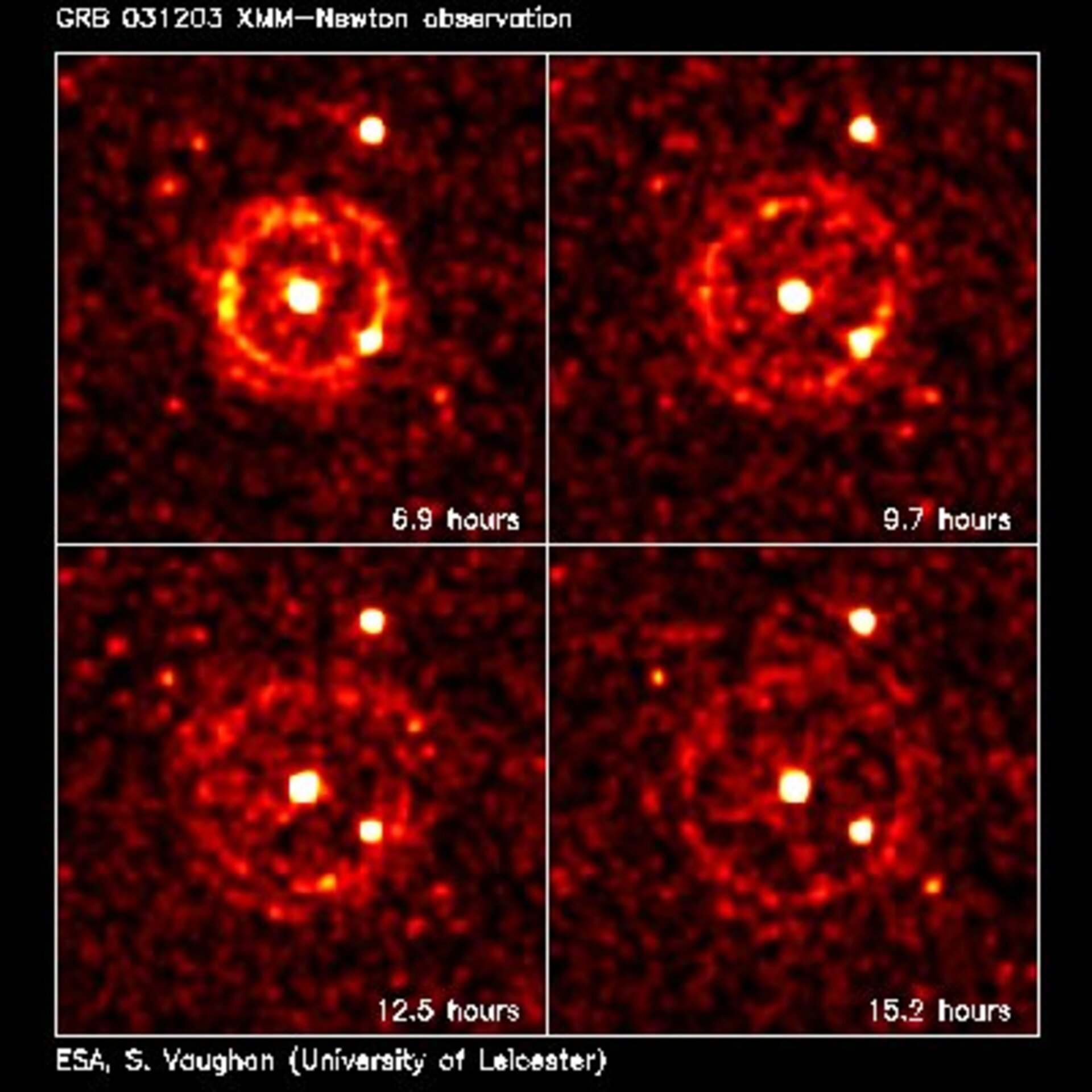 ESA's X-ray observatory, XMM-Newton, has imaged a spectacular set of rings which appear to expand, with a speed a thousand times faster than that of light, around the point in the sky where a powerful gamma-ray explosion took place in early December.

This is the first time that such a fascinating event, called an `echo', has been seen in X-ray wavelengths.

This echo forms when the powerful radiation of a gamma-ray burst, coming from far away, crosses a slab of dust in our Galaxy and is scattered by it, like the beam of a lighthouse in clouds. Using the expanding rings to precisely pin-point the location of this dust, astronomers can identify places where new stars and planets are likely to form.

On 3 December 2003 ESA's observatory, Integral, detected a burst of gamma rays, lasting about 30 seconds, from the direction of a distant galaxy. Within minutes of the detection, thanks to a sophisticated alert network, many observatories around the world were pointing their instruments at this mysterious source in the sky, named GRB 031203, in the attempt to decipher its nature. Also ESA's X-ray observatory, XMM-Newton, joined the hunt and observed the source in detail, using its on-board European Photon Imaging Camera (EPIC).

The fading X-ray emission from GRB 031203 - called the `afterglow' - is clearly seen in XMM-Newton's images. But much more stunning are the two rings, centred on the afterglow, which appear to expand thousand times faster than the speed of light. Dr. Simon Vaughan, of the University of Leicester, United Kingdom, leads an international team of scientists studying GRB 031203. He explains that these rings are what astronomers call an `echo'. They form when the X-rays from the distant gamma-ray burst shine on a layer of dust in our own Galaxy. "The dust scatters some of the X-rays, causing XMM-Newton to observe these rings, much in the same way as fog scatters the light from a car's headlights," said Vaughan.

Although the afterglow is the brightest feature seen in XMM-Newton's images, the expanding echo is much more spectacular. "It is like a shout in a cathedral," Vaughan said. "The shout of the gamma-ray burst is louder, but the Galactic reverberation, seen as the rings, is much more beautiful." The rings seem to expand because the X-rays scattered by dust farther from the direction of GRB 031203 take longer to reach us than those hitting the dust closer to the line of sight. However, nothing can move faster than light. "This is precisely what we expect because of the finite speed of light," said Vaughan. "The rate of expansion that we see is just a visual effect." He and his colleagues explain that we see two rings because there are two thin sheets of dust between the source of the gamma-ray burst and Earth, one closer to us creating the wider ring and one further away where the smaller ring is formed.

Since they know precisely at what speed the X-ray light travels in space, the team in Leicester have determined accurately the distance to the dust sheets by measuring the size of the expanding rings. The nearest dust sheet is located 2900 light years away and is probably part of the Gum nebula, a bubble of hot gas resulting from many supernova explosions. The other dust layer is about 4500 light years away. Understanding how dust is distributed in our Galaxy is important because dust favours the collapse of cool gas clouds, which can then form stars and planets. Knowing where dust is located helps astronomers to determine where star and planet formation is likely to occur.

Expanding X-ray dust scattering rings, such as those around GRB 031203, have never been seen before. Slower-moving rings, caused by a similar effect, have been seen in visible light around a very few exploding stars, mostly supernovae.

The expanding rings also provide much needed information on the gamma-ray burst itself. Gamma-ray bursts are the most powerful explosive events in the Universe, but astronomers are still trying to understand the mystery that surrounds their origin. Some occur with the supernova explosion of a massive star when it has used up all of its fuel, although only stars which have lost their outer layers and which collapse to make a black hole seem able to make a gamma-ray burst. The delayed X-rays from the echo of GRB 031203 are very useful because they tell astronomers how bright the burst was in the X-ray spectrum when it went off on 3 December. The only direct data available from that moment are those obtained by ESA's Integral observatory in the gamma-ray range. "XMM-Newton's measurements are thus crucial to better understand the nature of the burst," said Dr. Fred Jansen, XMM-Newton's project scientist. "The more details we gather of the burst, the more we can learn on how black holes are made."

Today, ESA's Integral and XMM-Newton observatories provide astronomers with their most powerful facilities for studying gamma-ray bursts. In 2004 a new gamma-ray satellite, called `Swift', will be launched as part of a collaboration between the USA, United Kingdom and Italy.

Swift will add to the flotilla of satellites providing fast and accurate locations of gamma-ray bursts on the sky, which can then be followed with XMM-Newton. This will provide even more opportunities for new discoveries in this cutting-edge field.

A scientific paper describing this discovery by Dr. Simon Vaughan and his collaborators has been accepted for publication in ``The Astrophysical Journal'' (see http://arxiv.org/abs/astro-ph/0312603).