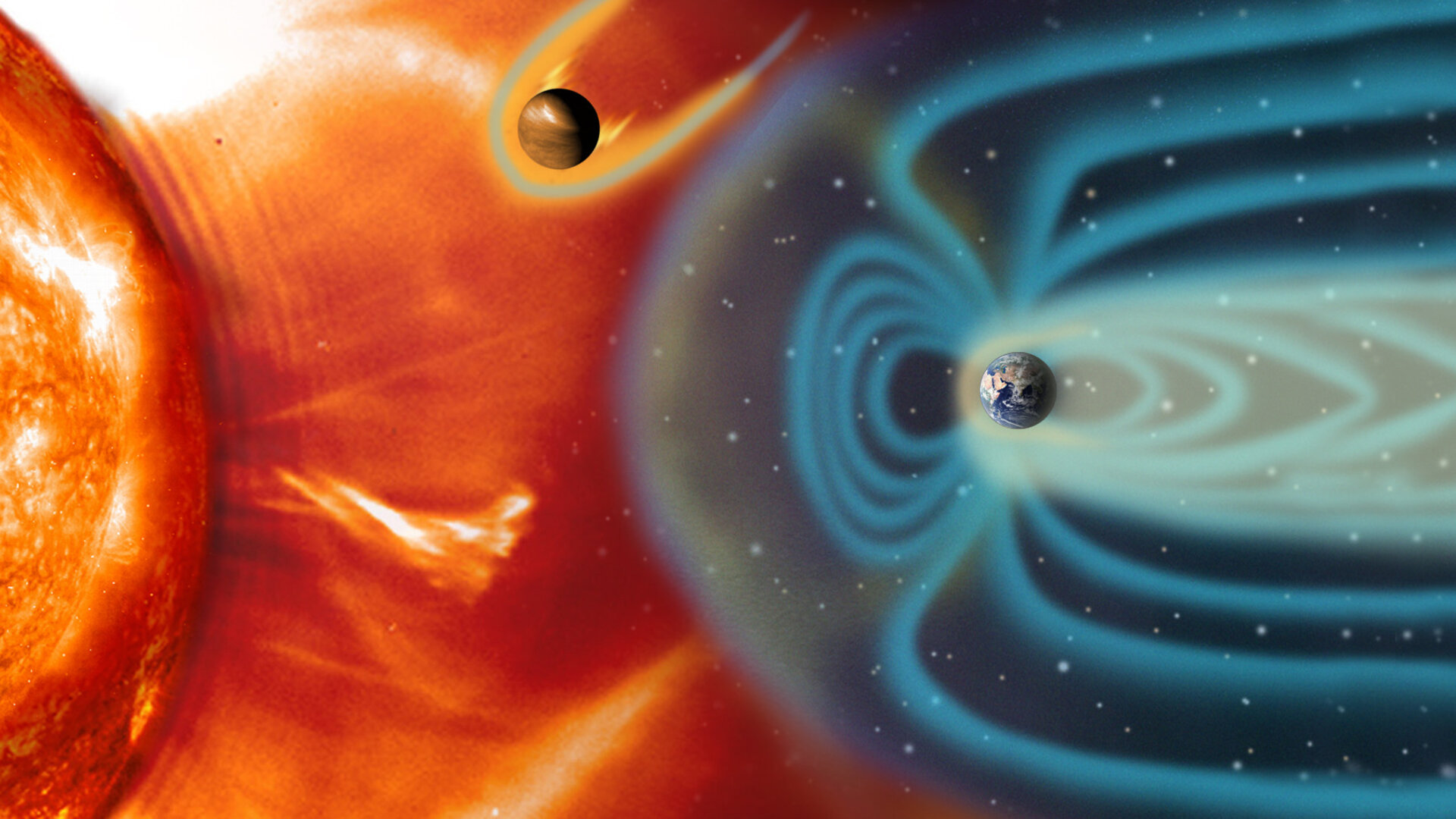 The Red Planet’s low gravity and lack of magnetic field makes its outermost atmosphere an easy target to be swept away by the solar wind, but new evidence from ESA’s Mars Express spacecraft shows that the Sun’s radiation may play a surprising role in its escape.

Why the atmospheres of the rocky planets in the inner Solar System evolved so differently over 4.6 billion years is key to understanding what makes a planet habitable. While Earth is a life-rich water-world, our smaller neighbour Mars lost much of its atmosphere early in its history, transforming from a warm and wet environment to the cold and arid plains that we observe today. By contrast, Earth’s other neighbour Venus, which although inhospitable today is comparable in size to our own planet, and has a dense atmosphere.

One way that is often thought to help protect a planet’s atmosphere is through an internally generated magnetic field, such as at Earth. The magnetic field deflects charged particles of the solar wind as they stream away from the Sun, carving out a protective ‘bubble’ – the magnetosphere – around the planet.

At Mars and Venus, which don’t generate an internal magnetic field, the main obstacle to the solar wind is the upper atmosphere, or ionosphere. Just as on Earth, solar ultraviolet radiation separates electrons from the atoms and molecules in this region, creating a region of electrically charged – ionised – gas: the ionosphere. At Mars and Venus this ionised layer interacts directly with the solar wind and its magnetic field to create an induced magnetosphere, which acts to slow and divert the solar wind around the planet.

For 14 years, ESA’s Mars Express has been looking at charged ions, such as oxygen and carbon dioxide, flowing out to space in order to better understand the rate at which the atmosphere is escaping the planet.

The study has uncovered a surprising effect, with the Sun’s ultraviolet radiation playing a more important role than previously thought.

“We used to think that the ion escape occurs due to an effective transfer of the solar wind energy through the martian induced magnetic barrier to the ionosphere,” says Robin Ramstad of the Swedish Institute of Space Physics, and lead author of the Mars Express study.

“Perhaps counter-intuitively, what we actually see is that the increased ion production triggered by ultraviolet solar radiation shields the planet’s atmosphere from the energy carried by the solar wind, but very little energy is actually required for the ions to escape by themselves, due to the low gravity binding the atmosphere to Mars.”

The ionising nature of the Sun’s radiation is found to produce more ions than can be removed by the solar wind. Although the increased ion production helps to shield the lower atmosphere from the energy carried by the solar wind, the heating of the electrons appears to be sufficient to drag along ions under all conditions, creating a ‘polar wind’. Mars’ weak gravity – about one third that of Earth’s – means the planet cannot hold on to these ions and they readily escape into space, regardless of the extra energy supplied by a strong solar wind.

At Venus, where the gravity is similar to Earth’s, a lot more energy is required to strip the atmosphere in this way, and ions leaving the sunward side would likely fall back towards the planet on the lee-side unless they are accelerated further.

“We therefore conclude that in the present day, ion escape from Mars is primarily production-limited, and not energy-limited, whereas at Venus it is likely to be energy-limited given the larger planet’s higher gravity and high rate of ionisation, being nearer to the Sun,” adds Robin.

“In other words, the solar wind likely only had a very small direct effect on the amount of Mars atmosphere that has been lost over time, and rather only enhances the acceleration of already escaping particles.”

“Continuous monitoring of Mars since 2004, which covered the change in solar activity from solar minimum to maximum, gives us a large dataset that is vital in understanding the long-term behaviour of a planet’s atmosphere and its interaction with the Sun,” says Dmitri Titov, ESA’s Mars Express project scientist. “Collaboration with NASA’s MAVEN mission, which has been at Mars since 2014, is also allowing us to study the atmospheric escape processes in more detail.”

The study also has implications for the search for Earth-like atmospheres elsewhere in the Universe.

“Perhaps a magnetic field is not as important in shielding a planet’s atmosphere as the planet’s gravity itself, which defines how well it can hang on to its atmospheric particles after they have been ionised by the Sun’s radiation, regardless of the power of the solar wind,” adds Dmitri.

The study is based on data collected by the Mars Express ASPERA-3 instrument, the Analyser of Space Plasmas and Energetic Atoms.

A twin instrument also operated on ESA’s Venus Express, which concluded its mission in 2014.

Mars Express was launched on 2 June 2003 and reaches 15 years in space this year.