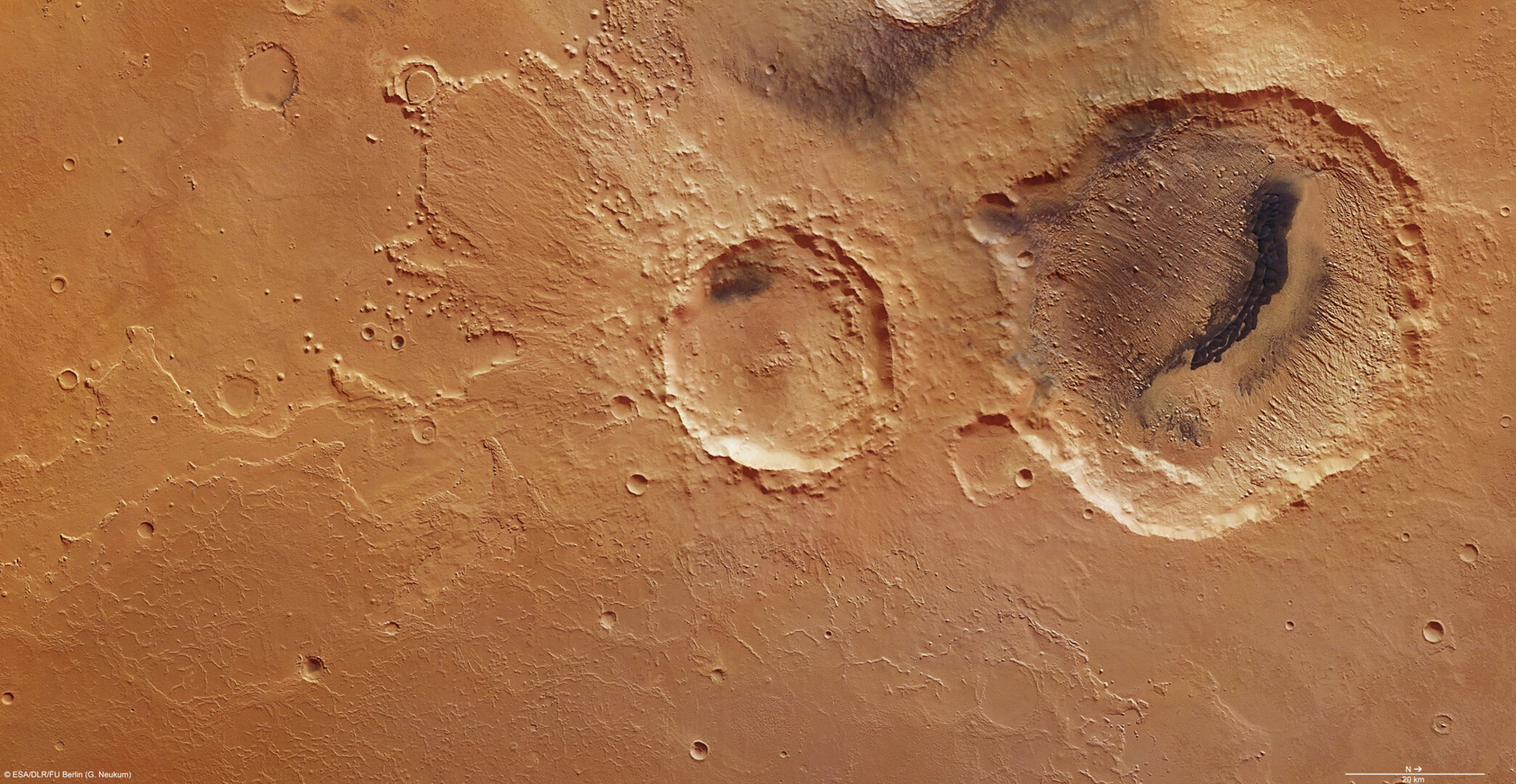 ESA’s Mars Express has provided images of a remarkable crater on Mars that may show evidence that the planet underwent significant periodic fluctuations in its climate due to changes in its rotation axis.

On 19 June 2011, Mars Express pointed its high-resolution stereo camera at the Arabia Terra region of Mars, imaging the Danielson and Kalocsa craters.

Danielson crater is named after the late George E Danielson, who was instrumental in the development of many spacecraft cameras flown to Mars. Seen to the right (north) in the image, it is the larger crater, roughly 60 km across.

Kalocsa crater lies in the centre of the image and is smaller, about 33 km in diameter and a kilometre shallower than Danielson. It is named after a town in Hungary famed for its astronomical observatory.

Danielson crater, like many in the Arabia Terra region, is filled with layered sediments, which in this instance have been heavily eroded over time. Within the crater are peculiarly layered buttes, known as yardangs.

Yardangs are streamlined hills carved from bedrock or any consolidated or semi-consolidated material by abrasive dust and sand particles carried in the wind.

They are seen on Earth in desert regions, with notable examples in North Africa, Central Asia and Arizona in the United States.

In the case of Danielson crater, it is believed that sediments were cemented by water, possibly from an ancient deep groundwater reservoir, before being eroded by the wind.

The orientation of the yardangs leads scientists to theorise that strong north–northeasterly winds (from the lower right in the image) both deposited the original sediments and then caused their subsequent erosion in a later drier period of martian history.

A 30 km-long field of darker dunes can be seen bisecting the yardangs and is thought to have formed at a later epoch.

The crater floor of Danielson shows evidence for a series of alternating sedimentary layers with roughly uniform thickness and separation.

Some scientists believe that this indicates periodic fluctuations in the climate of Mars, triggered by regular changes in the planet’s axis of rotation. The different layers would have been laid down during different epochs.

Here, no layered sediments are seen. This is thought to be due to the higher altitude of its floor, with the crater not tapping in to the suspected underlying ancient water reservoir.

Another hypothesis is that this crater is younger than its neighbour, created when water was not present anymore.