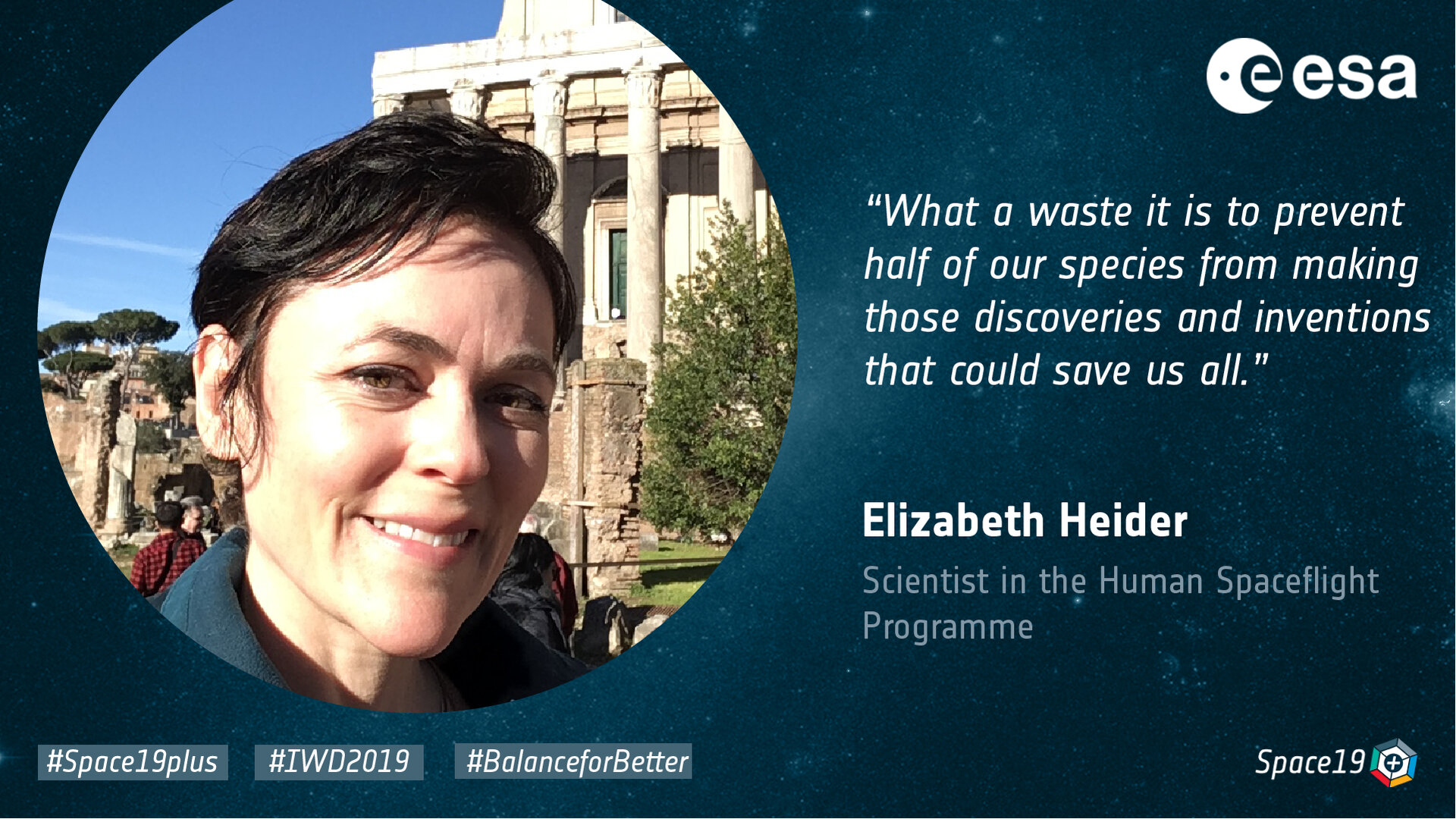 I started working at ESA three years ago. I’m a scientist in ESA’s Human Space Flight programme in the requirements planning team. I’m part of a group that helps put the ESA science experiments and technology demonstrations into operations aboard the International Space Station (ISS). I help identify what we are able to plan for, and I keep track of what we need to do, and what we’ve done. I conduct regular analysis to give scientific context to ongoing operations and give operational context for upcoming plans. I track and support the execution of on-board ISS operations, and I regularly advocate and defend ESA objectives in a multilateral community of ISS researchers. By focusing on long-term requirements, I help both planners and operators to understand how their actions today will affect operations tomorrow.

I became interested in physics when I was 16 years old. I wanted to understand how things worked, and I didn’t want there to be anything that I was afraid of looking at or trying. I wanted to be someone who could make an interesting discovery or contribution. I was tremendously inspired by space science, and felt for a long time that I would like to be an astronaut. I read books by Stephen Hawking, Carl Sagan, Richard Feynman, Roger Penrose and Madeleine L’Engle. As I started studying physics, I was also constantly driven by curiosity to know and understand more. There’s a moment when you’re working on a difficult problem, and the pieces suddenly fall into place, and you feel this great satisfaction – an ‘aha!’ moment. This is an addictive feeling. I loved it.

I completed a bachelor’s degree in physics, and then moved on to completing master’s and PhD degrees in physics. Out of graduate school, I started working as a civilian operations research analyst with the Navy. I deployed aboard Naval ships and applied my problem-solving skills to real-world problems. After several years of operations research, I was drawn back to space science since this had been an early passion of mine, and I liked the idea of bridging the gap between science and operations.

I was drawn to ESA because I like the international collaboration. Every country is so different and has its specific identity and priorities, but everyone is working together to this shared ideal. If we ever manage to leave our planet and colonise other worlds, it will be because we’re able to set aside our nationalistic interests in favour of a shared vision for our species.

Let me first clarify that I have only been at ESA for the past three years – therefore my answer to this question focuses primarily on my experiences on the path I took to become an ESA Scientist. I have encountered a lot of gender barriers, but I don’t think I always recognised or understood them at the time. Gender discrimination can be very subtle. It’s the professor who frequently talks about your errors in front of the class; it’s the all-male study group that does homework together and never includes you; it’s the assignment of menial tasks in the laboratory that your male counterparts are not required to do; it’s the expectation that you’ll be responsible for social or administrative tasks in your research group; it’s men talking over you in meetings, ‘mansplaining’, or taking credit for your work; it’s the opportunities for presentations or participation that never seem to come your way; it’s the pervasive implication that you don’t belong, that you aren’t cut out for this – that the problem is you. Gender discrimination is limiting. It says that you must edit some fundamental aspect of yourself in order to be acceptable – that you can’t be driven by rational pursuits, and still have an emotional life and satisfying intellectual, sexual, and spiritual connections with others.

Gender discrimination can also take more aggressive forms such as inappropriate sexual comments and innuendo, discussions about your physical appearance, inappropriate requests, and even assault. As such, gender discrimination takes away your independent right to exist, reducing you to an object that satisfies or frustrates the needs and wants of others. Gender discrimination is discovering that reporting such bad behaviours will result in repercussions for the victim, and institutional protection of the perpetrator.

Gender discrimination is founded on an idea which has persisted for thousands of years, and still is overtly practiced in many countries around the world: that women are inherently inferior to men in thinking and creative problem solving, and that there are certain tasks and functions that are ‘female’ and others that are ‘male’. This misogynistic perspective is also pervasive in many modern societies that purport to advocate for the rights of women - but it manifests more covertly in such societies: in privately-held beliefs and subtly destructive practices that keep women in their ‘place’. The challenge is to recognize and acknowledge this perspective as something that comes from without, and does not reflect your inherent capabilities or the intellectual value you can bring.

When I started working on a graduate degree in physics almost two decades ago, gender discrimination was a regular part of my life. In the course of my education and career I’ve personally experienced all the forms of gender discrimination I describe. It’s often been difficult to identify or understand it for what it is, because that's how discrimination works: it's insidious. You're singled out or treated differently and you internalise this treatment, thinking that the problem is with you. Reporting bad behaviour was also difficult because I was made to believe that this would negatively affect my educational or career goals. Gender barriers have at times dramatically affected the way I’ve perceived myself and interacted in my field. I wonder sometimes how different my career would have been if the academic research environment had been less hostile towards women. I see some indications that the situation is changing: that more people are speaking out, that we are being heard, and that organisations are changing. I feel hopeful, but I don’t want to make the mistake of assuming that everything is ‘fixed’.

I know this is personal information and of course I feel reluctant to dredge up the past. However, I think it's important to talk about these issues, because we have to name a problem in order to fix it. I also know that many women and girls are living out difficult situations and facing tremendous barriers, and they shouldn’t feel that they are alone. If I can't talk about it, who can?

Acknowledging that a gender-imbalance still exists is an important step. It’s a mistake to think that we’ve somehow moved past it. This means you have no place to go when you experience gender issues first hand: you are left to internalise the discrimination and abuse.

I think programmes that give early access to female students and scientists are helpful. The playing field is still so uneven, so there have to be proactive measures to provide a remedy. Social conditioning from an early age is still very gendered (for example, social shaming of young girls in math and science can lead them to be less verbal about their enthusiasm and less likely to volunteer), so I think the solutions have to take this into account.

I think that access to reproductive control measures, and child-care support all help to provide a positive support structure that can help women overcome financial, time and social burdens, which disproportionately affect them. Also helpful are policies that prohibit social punishment for women who have child-raising responsibilities.

It’s been personally helpful for me to have female friends and informal mentors in my career. I’ve noticed a tendency for women who have fought through a hostile educational or work environment to close themselves off to women who are coming afterwards. I’ve also noticed that women can be the most vociferous enforcers of the patriarchy. I’ve unfortunately encountered some of these women. However, I’ve also been extremely fortunate to have met and worked with women who have welcomed me, appreciated what I had to offer, and opened my eyes to new ways of thinking or interacting through their own example. Sisterhood can be very powerful in fighting discrimination.

What are in your view three measures that could make a difference in supporting a work–life balance and at the same time equal career opportunities.

Be brave. Be strong. Chase down your interests and passions. Never be ashamed of your ambition or curiosity. There is so much work to be done in discovery and science and innovation, and we humans have such a limited time in which to do it. We have to learn how to save our planet from climate change, to cure diseases, to heal international conflicts, to colonise other planets, and reveal undiscovered secrets of physical laws. What a waste it is to prevent half of our species from making those discoveries and inventions, and finding solutions that could save us all! Don’t let anyone bully you into silence. When people are irritated with you, or try to oppose your progress, this generally means you’re doing something right.