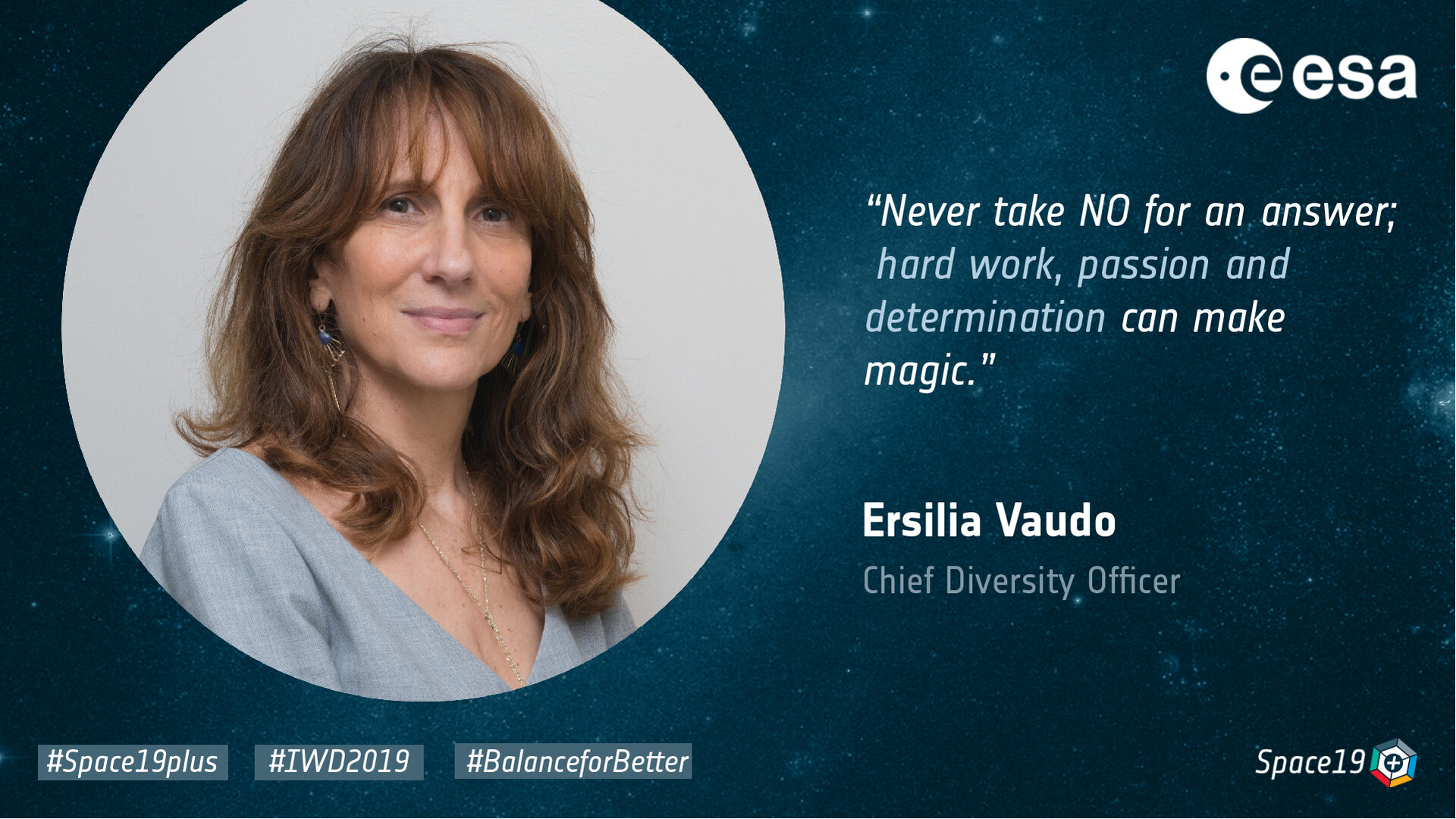 Gender equality is crucial to achieving sustainability and economic progress throughout the world. High female participation rates in the workforce boost innovation and growth, while the education of girls helps to alleviate poverty and social disparities, particularly in the developing world. However, the gender gap in science and technology remains a stubborn anomaly in the pursuit of social inclusion and human rights for women and girls. The United Nations’ Sustainable Development Goals (SDGs) are designed to redress such imbalances.

The scientific achievements of 20th century women such as Marie Curie and Rosalind Franklin are well known, though not always recognised. Fewer than 20 female Nobel laureates in the physical sciences have been honoured since 1901 and women now occupy less than 30 percent of research and development jobs worldwide. In the space sector, some progress has been achieved to boost female representation since Valentina Tereshkova became the first woman in space more than 50 years ago. Even so, barely one in 10 astronauts in history have been women.

International Women’s Day, which was first celebrated in four European countries in 1911, is a fitting occasion to spotlight the gender deficit in all walks of life, including science and technology. Commemorated on 8 March, participants around the world will honour women’s achievements and call for gender parity on a broad range of issues, including equal pay, higher female participation rates in the workplace as well as improved health and education services for women and girls, particularly in developing countries.

The European Space Agency (ESA) aims to achieve gender equality and the empowerment of women and girls through its SDG5-related projects, which have a knock-on effect for all SDGs that benefit from female inclusion in society. ESA is applying its space technology and human resources to help close the gender gap by promoting education in the developing world and by encouraging women and girls to pursue careers in science, technology, engineering and mathematics (STEM), which traditionally have been male domains.

“I am happy to see that more and more women are pursuing science and engineering careers,” says Jennifer Ngo-Anh, a team leader in the Directorate of Human and Robotic Exploration Programmes at the European Space Research and Technology Centre (ESTEC) in Noordwijk, the Netherlands. “Especially in the past 10 years, there has been a nice change from a working environment mainly dominated by men to a more balanced one.”

Diversity has been placed high on ESA’s corporate agenda and is a top priority of Director General Johann-Dietrich Wörner, who called for concrete action to be taken in this area. Accordingly, the Director General released a policy statement in 2017 to demonstrate his commitment to diversity and inclusiveness. Under the leadership of Chief Diversity Officer Ersilia Vaudo, a number of initiatives have been unveiled with the aim of inspiring more women to pursue space careers and apply for ESA jobs; supporting more women at all levels of the organisation; and encouraging girls to explore their interest in STEM subjects.

ESA participates in several external networks established to discuss these issues. In partnership with CERN, the European Southern Observatory and five other organisations, ESA created a working group on diversity in the EIROforum, whose members have signed, for the first time, a joint statement supporting girls interested in STEM-related subjects. The Agency also collaborates with the Organisation for Economic Co-operation and Development (OECD) on the topic of gender stereotypes in science, and with the European space industry to promote common action on fighting stereotypes in space jobs.

“Our aim is to encourage more women from our 22 Member States to apply for ESA jobs, as women today represent only 20 percent of ESA applicants,” says Vaudo, who has worked at ESA since 1991. “We also want to create a working environment that gives women a greater say in decision-making processes, recognises their talents and provides future generations of girls with the same job prospects that men and boys currently have.”

Last year, ESA also helped toymaker Mattel to design a Barbie doll modelled on Italian astronaut Samantha Cristoforetti, who became an inspiration to girls in her homeland when she returned to Earth in 2015 after spending 200 days in space. The Barbie initiative was part of the U.S. company’s Dream Gap project, a global initiative aiming to break early gender stereotypes and help girls to pursue their dreams.

ESA is a partner of Women’s Forum for the Economy and Society and organised a recent panel discussion on the future of space exploration involving female astronauts from Europe, Japan, Russia and the United States. The Agency is also a corporate member of Women in Aerospace, a global network that promotes female advancement in the aerospace industry.

“The fact that women belong to a minority in this professional environment is probably a limitation,” says Isabel Rojo, a spacecraft operations manager at the European Space Operations Centre (ESOC) in Darmstadt, Germany.

“There are hardly any female leaders that one could use as a role model, which somehow reduces our aspirations as women in this field. I also realised that women have to work harder in order to get the same level of professional respect.”

ESA aims to increase awareness of the importance of equal opportunity within the Agency; to pursue a proactive policy towards the recruitment of women; and to address the constraints that arise from the need to reconcile family and professional lives. For example, ESA offers its staff members parental and family-care leave, flexi-time and part-time work arrangements as well as on-site child-care facilities at its ESOC, ESTEC and ESRIN locations. It also grants staff allowances for the educational and special needs of children.

“Equal opportunity requires constant improvement,” says Florence Hélière, a payload manager on the Biomass Project of the Earth Observation Directorate at ESTEC. “In particular, there is unconscious bias that can hamper an organisation’s attempts at achieving diversity. Of course, selecting a candidate whom you know, or who is known to one of your colleagues, provides confidence in his capacity to do the job. This has the drawback that we tend to induce a selection of similar profiles and goes somewhat against diversity.”

The United Nations Office of the High Commissioner for Human Rights (OHCHR) has been building awareness about unconscious bias in recruitment processes in recent years. In 2017, OHCHR found that mothers were 79 percent less likely to be hired in the UN system, even though they were equally qualified for the job. The words and attitudes of male and female candidates were also assessed differently, with women receiving 2.5 times more feedback about aggressive communication styles in performance reviews, according to OHCHR.

The proportion of female staff at ESA has increased steadily over the past decade, with women accounting for about 40 percent of new recruits in 2018. Although this figure is still below full gender parity, this development is encouraging in a profession that has been overwhelmingly represented by men. ESA regularly revises its recruitment process to foster diversity and monitors the equal-opportunity measures of other organisations in order to gain ideas for potential improvements to its own selection criteria.

“One very helpful measure would be to encourage applications from scientists and engineers who put their careers on hold because of family reasons,” says Ana M. Heras, a project scientist in the Directorate of Science who has worked at ESA for more than 25 years. “Too often, we see that women have to quit science because they are not given the opportunity to return.”

Gender stereotyping begins in childhood and can discourage girls from pursuing their interests in a range of fields. In the sample survey conducted for this article, many female scientists at ESA reported that they were drawn to the physical sciences and space industry at an early age, and later recognised the need to overcome significant gender barriers in their chosen profession. The remarkable career success of these dedicated women is testament to the gradual removal of the ‘glass ceiling’ and augurs well for young girls with an interest in science and technology.

“Be brave. Be strong. Chase down your interests and passions. Never be ashamed of your ambition or curiosity. There is so much work to be done in discovery, science and innovation, and we humans have such a limited time in which to do it,” says Elizabeth Heider, a scientist in the requirements planning team of the Human Spaceflight Programme at ESTEC, offering some advice to the next generation of young female scientists.

Women and girls represent about half of the global population. Without their full participation in society and their valuable contributions to scientific progress, society is hindering its own advancement while delaying the discoveries and innovations that will help make life on Earth more sustainable. By ensuring gender diversity in all professions, humanity will be taking one giant leap toward prosperity and peace.