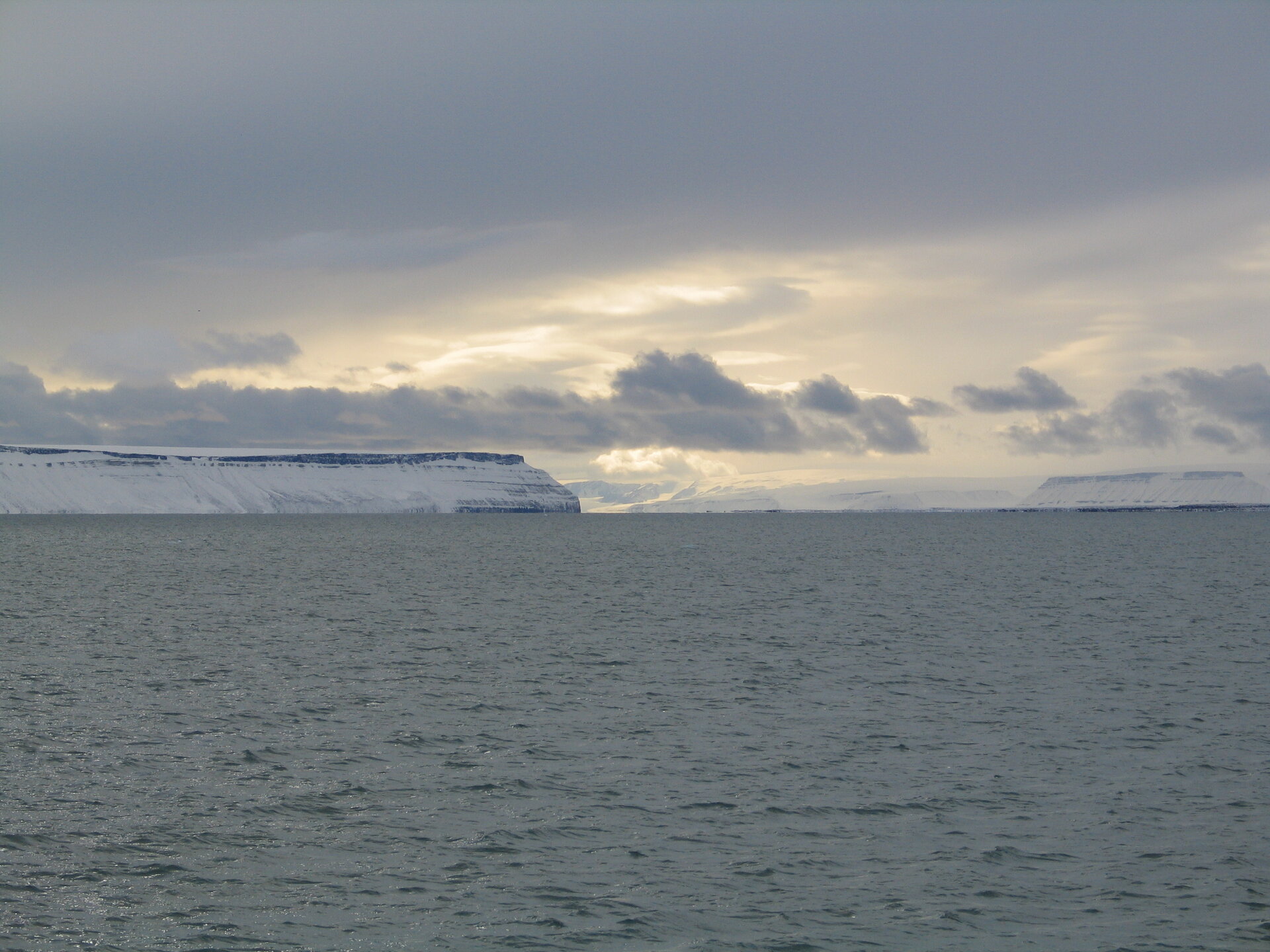 Very few people went to land today, mostly our management team, as there was a polar bear sighting at around 5 this morning by the crew – unfortunately (or fortunately, depends on your point of view) I was fast asleep at the time – it seems we’re getting more than our fair share of polar bears (not that I’m complaining actually). As a consequence I’ve spent most of my day on ship.

I’ve been asked to write a report on my experiment so I’ve spent my time writing about that and standing on the deck enjoying the view. I think this is the most beautiful site yet!

It’s been snowing all day, so everything is covered in thick white snow, even the ship was turning white at one point. Around 17:00 it cleared up and it’s... breathtaking! The light and the cloud formations don't hurt either.

On the south side of the fjord (where we are now) there’s a scientific camp, from the polar institute, on shore, so our expedition leader went to shore and invited them for dinner, thinking they could probably use a warm meal and a hot cup of tea – as beautiful as it is here, camping in this weather must be a pretty miserable and cold experience.

I spotted a seal from the deck today, but otherwise things have been quite calm – I’m hoping to go to shore tomorrow, I’d love to try and get some samples from around here for my experiment, only I probably won’t find much dust with all this snow around.

Last night Terje (I think I misspelled his name in yesterday's blog, due to the confusion of the American pronunciation) showed me pictures from a polar bear tagging cruise the ship went on – they would track down polar bear, sedate them and tag them – fantastic pictures!

My absolute favourites however was when they had sedated a mother polar bear and discovered two tiny cubs with it – about half a meter in length, absolutely gorgeous little teddy bears, and apparently the cubs are not the least aggressive so they could pick them up with no sedation etc.

He also showed pictures from a university cruise in the spring where they were investigating the ice thickness – must be fun to be breaking through the ice and being able to walk all the way up to the ship etc. There are so many experiences left out there...

Tonight we had two more talks, one from Dean Eppler who is (his own words) a spacesuit crash-test dummy, and one form Pam Conrad, the science lead of STARS.

Dean Eppler basically works as a test dummy for experimental spacesuits and on this expedition he is testing, and helping in the development of, a wearable computer, a pet project of Andrew Steele, our science manager.

He talked about the consequences of suits having to be pressurized while still allowing for (almost) complete mobility. He also talked about how all spacesuits are handmade in Delaware by a little old lady with a sewing machine, and that spacesuits are custom made to each astronaut.

Some spacesuits weigh up to 100 kg and most cannot bend at the waist, making it complicated to pick up thing from the ground. He also talked about the complications of getting into and out of a spacesuit due to weight, stiffness and tailoring and the tediousness of laboratory motion testing.

Dean is actually a geologist, but has entered the field of spacesuit testing to answer the question of whether a geologist can in fact perform their work in a spacesuit. He also talked about the testing and usefulness of manned rovers, allowing astronauts to save energy by not having to walk, even though the rovers are typically not faster than walking.

Apparently suit test dummies are followed by an entourage to make sure that they are not being affected mentally due to some physical condition. Typically it takes around three cycles to develop a spacesuit, and here in Svalbard it’s probably the closest you can get to a polar bear safe-suit ;-)

Pam's talk was on 'Rock targeting for habitability assessment' or 'How to find the really good spots to take a sample'. She put a lot of emphasis on distinguishing between present life, former life, habitability (and the definition of this, i.e. habitability for what/who) and biogenic clues (things that are produced by living organisms, but not alive themselves).

She also discussed the different parameters one can measure, and the constraints of them, in order to determine habitability.

Now, I think I’ll return to my report writing...