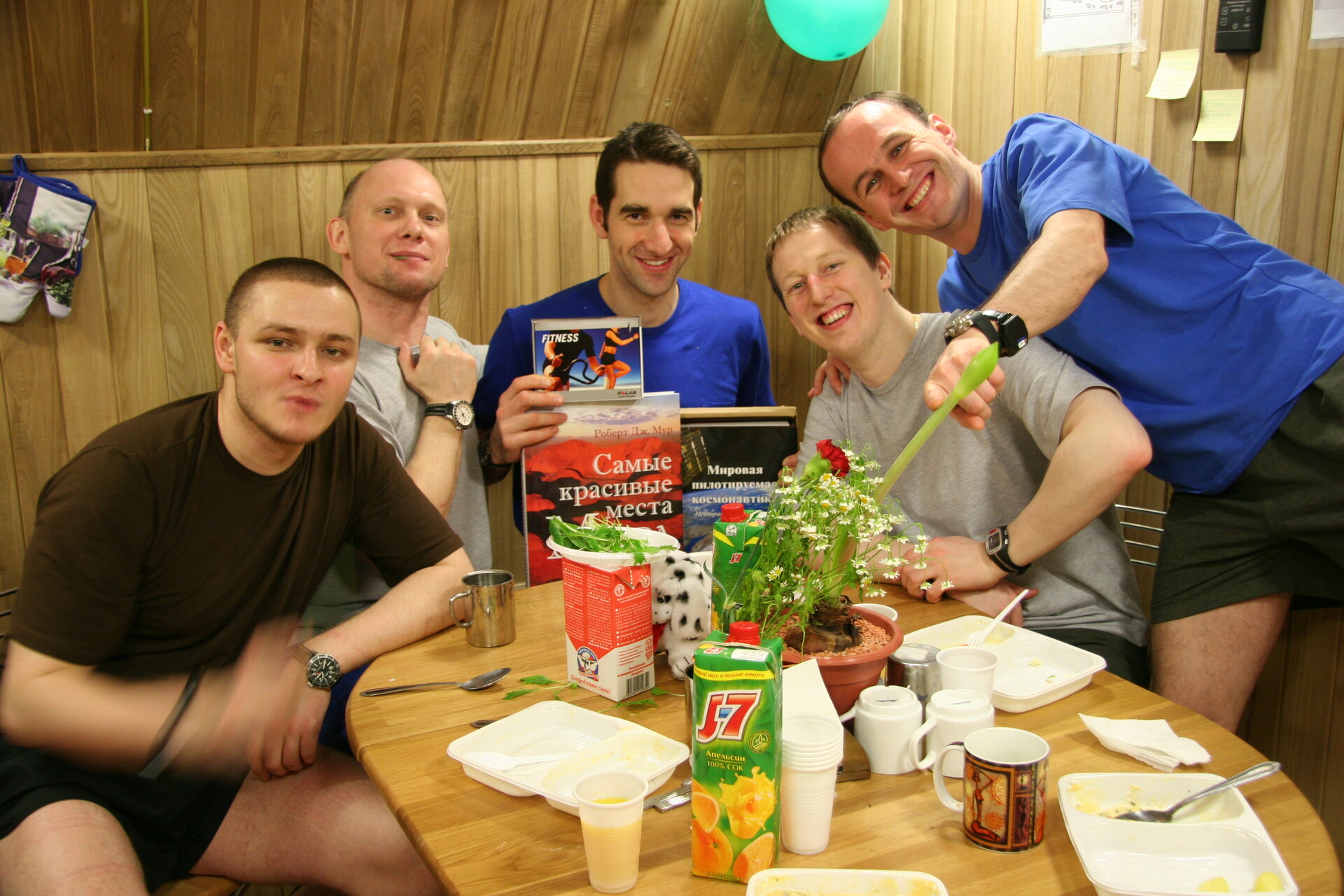 As the crew complete their seventh week inside the special isolation facility at the Institute of Biomedical Problems in Moscow, Russia, ESA-selected Mars500 crewmember Oliver Knickel looks back on a week that included a celebration of his 29th birthday.

The beginning of the seventh week in isolation belonged to our crew 'vampire', our Russian crew doctor Aleksey, who takes more than 400 ml of blood from us for numerous scientists every two weeks. Among these scientist is a group from the eternal city of Rome who participate in the Mars500 isolation study via the ESA scientific programme.

They have discovered that vascular damage and a certain type of diabetes, both of which are widely spread in western countries among the population over 50, is mainly due to social stress, inactivity and bad nutrition. Space environments provide exactly such conditions of stress and limited possibilities for physical workout and nutrition for human beings, and slowly induce reversible processes and an increased cardiovascular risk.

The scientists have found ways to evaluate the amount of damage that is caused to the human body by measuring immune and hormonal factors, such as the levels of Cortisol and Leptin found in the blood, glucose from finger blood, urine and saliva. They have developed an approach to prevent these dangers by providing special nutritional countermeasures as well as physical training protocols and psychological support.

If they succeed in developing efficient methods and processes of prevention, they could not only support astronauts on future long-distance missions like to Mars, but also provide tremendous improvements in the health of the elderly, thereby saving the healthcare systems an enormous sum of money.

As the days and weeks fly by, it was once again my turn to become one year older on 12 May – I turned 29. Since I was on shift that day (each crewmember has one nightshift every six days), I was reminded how during my first years in the army I celebrated my 20th and 21st birthdays guarding an ammunition camp. I have to say though that I don't hold any grudges about that, nor is it policy in the German army to put guys on shift on their birthdays. Back then the superior who planned my duty just didn't know it was my birthday and being young, I just didn't dare to question his decision.

As Murphy's Law would have it, just after midnight on 12 May we had an off-nominal situation when the air purification and conditioning system in the crew quarters failed. This could be seen from the operation centre of our module where you can watch and tune all parameters in all three modules - including temperature, atmospheric humidity and the concentration of oxygen, carbon dioxide and carbon monoxide. We quickly noticed an increase in temperature up to 30 °C, as well as an increase of the carbon dioxide and carbon monoxide concentration in the air, which can quickly become life-threatening.

In a normal atmosphere, exhaled breathing gases just mix with the surrounding air and can, for example though plant photosynthesis, be turned back into oxygen. But in a confined environment like our Mars module this is not possible because of a limited volume of air and plants. If the air purification doesn't work, the concentration of these poisonous gases just steadily increases and can, when they reach a certain level, cause serious harm to the crew and finally even cause death.

In order to prevent the loss of the ship should the air purification system failing entirely, all modules (the crew quarters, the medical and the storage module) can be separated from each other by airtight hatches and have separate air purification and conditioning systems. So the only thing we could have done if we weren't able to find and fix the problem was to move the whole crew into the storage module, close the hatch and spend the night there and hope that we could fix the problem.

Fortunately we were able to repair the problem before it became serious by simply replacing a filter and a condenser which broke in the air purification system in the crew quarters. Still all crewmembers had to be warned and had to prepare themselves to move to the storage module as soon as necessary.

This bad omen was soon forgotten when my crewmates decorated the whole module with cosmonaut balloons for me. The balloons had a face drawn on them and were hanging upside down from the ceiling as if under weightless conditions.

They also had a huge amount of presents for me. I received one from my Russian crewmates, another from my French crewmate and even the backup crew had managed to get a present into the module ahead in time. Not to mention the presents from my family and girlfriend. In the end I only regretted that there were no Japanese or U.S. crewmates because this might have meant even more additional presents for me!

I was also positively surprised and stunned by the huge amount of good wishes and congratulations I received via email and ground control, among them high-ranking spaceflight officials from Europe and Russia, like the ESA Director of Human Spaceflight, Mrs Di Pippo, the Head of the German Aerospace Center, Prof. Woerner, and former ESA astronaut Thomas Reiter who holds the European record for most days in space.

Afterwards we had a nice dinner for which we had saved fresh tomatoes, salad and strawberries from our greenhouse for more than two weeks. Finally we gathered together in our crew module to sing karaoke together. This was quite funny since all the songs on the CD were in Russian and Cyrille and I didn't know a single one of them. Our attempt to combine our singing with the melody did not always succeed, making our Russian crewmates almost explode with laughter.

This was definitely a special birthday and one which I will never forget. If I think back to former birthdays of mine, what strikes me is that many of them were alike; I invited friends and we had a barbecue together or went out. Today I cannot even distinguish most of them from each other. This will definitely never be the case for this birthday, being celebrated on a simulated flight to Mars.

Now there is only one week left until the peak and halftime of our isolation experiment and I am very sure that we will as a crew also pass this second half with great inspiration, being aware of what Europe's ancestors in ancient Greece knew: "Every place with a person enthusiastic about something is the summit of the world."