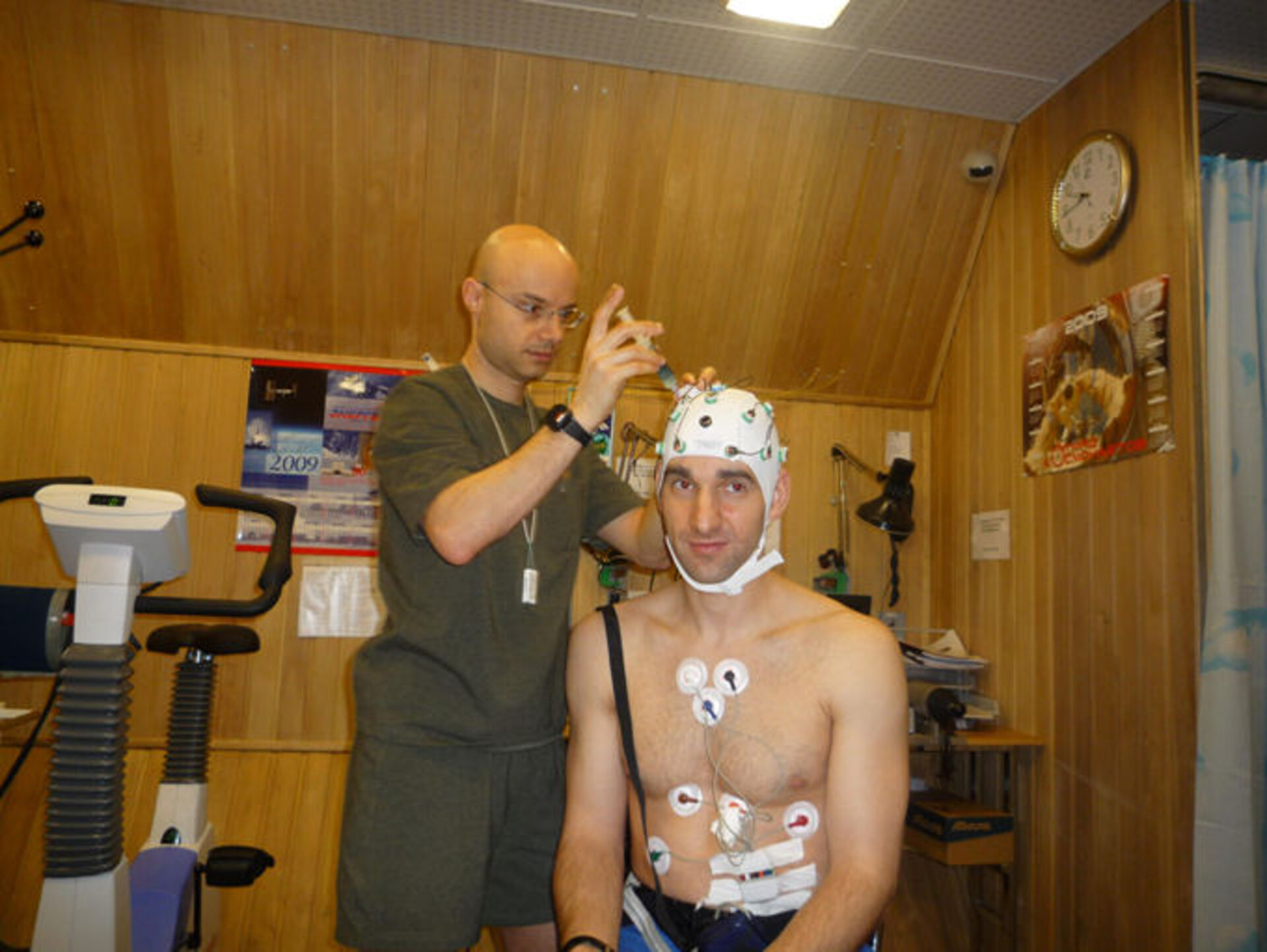 The Mars500 crew is now one-third of the way through their 105-day stay inside the isolation facility in Moscow. As ESA-selected crewmember Oliver Knickel reports in his latest diary entry, the past week has been dedicated to tests.

We could tell last week already from our timetable that the fifth week was going to be quite strenuous, with intensive and extensive testing of all crewmembers physiologically as well as psychologically.

This is because our 105 days of isolation are divided into thirds of 35 days, since 35-day cycles have been identified by the scientific community as a period in which significant changes can be detected in human beings caused by environmental conditions.

So we went more or less through a total 'system check' of our bodies, including not only complex methods with the help of ECG or EEG devices, but we also gave saliva, blood, breathing air and urine samples, as well as completing numerous psychological and cognitive tests.

One of the tests we fulfilled at the end of this first 35-day period was for a German experiment from the Sport University of Cologne who joined the Mars500 programme via ESA. This group researches the effect of long-term isolation on stress levels in the human body and physical training as a countermeasure to this perceived stress.

They have discovered that the 'serotonergic system' plays an important role in the adaptation of mood, vigilance, brain-functioning and performance and that physical training has a positive impact on it.

With the help of blood samples, they can estimate the impact of isolation on the serotonenergic system. Then, in order to determine the positive effect of physical training on a person’s mood and motivation, they use an EEG hat in combination with a questionnaire to be completed before training. Immediately after training the same procedure is used again, so the states before and after physical exercise can be compared and the consequence of training can be evaluated.

To assure that EEG testing can be done immediately after the physical training without the need for time-occupying preparation, we wore the EEG hat during exercise which made us look funny and gave us an additional mood boost since we were laughing so much at ourselves.

If their hypothesis is proven to be true, the scientists can counteract the effect of long-term isolation on astronauts’ flights e.g. to the International Space Station, or one day even to Mars, with the help of special training protocols and thereby assure their mental wellbeing and performance. Furthermore, they could provide similar physical training protocols to help not only diseased, but also healthy people, to improve their quality of life.

Other physical testing was to compare the different training methods within these cycles of 35 days. Each crewmember uses two different methods of physical training. While all of us use the ergometer as the first method, we are each using a different second method, such as muscular electro-stimulation with low and high frequency, as well as a special training device for increasing maximum force, endurance and speed that has been designed by scientists from the Technical University of Vienna.

To compare these methods we had to perform tests on an ergometer and on a treadmill, combined with the measurement of blood glucose. Then, for the next 35 days cycle we will change to one of the other training protocols. This is good for me since I will receive from Cyrille the high frequency electro-stimulation that has to be used for 20 minutes a day, while I give him, with great pleasure, my low frequency electro-stimulation that he will have to wear every day for 3 hours, getting a current through his legs every three seconds.

Besides all the testing and work, our crew still found time to gether together in the evenings after dinner and not having done this very often in the previous weeks we decided to watch a movie together this Monday. Because the tastes are different and we had a big selection of movies to choose from, we spent quite some time deciding what to watch until Cyrille mentioned that he had never seen the Lord of the Rings before, not one single minute of one single part.

So for the rest of the crew it was immediately clear which movie to watch to close this gap in Cyrille’s movie watching history. But, as the Lord of the Rings has three parts and none of them are below the length of two hours, and because all of us wanted to see the whole story again, after having started with the first part, there was also no choice about what to do the following two evenings. By Wednesday night we already had three nice evenings of the crew being together in the crew quarters. The Russians could relax and enjoy the film, I could improve my Russian by watching altogether more than 6 hours in Russian language and Cyrille finally learnt in what kind of mess you can get when deciding to wear the wrong ring. Fortunately he did not want to change his mind about his marriage in August.

It was also nice to see that spring has already reached the inside of our module since the flowers we took inside our greenhouse a month ago as bulbs are growing fast and some of them sprang up and are already nice and big. Since I promised my girlfriend to plant a flower for her, I was very pleased to see that the one I dedicated to her has turned out to become a real beauty.

Well, one hardly notices the time passing by fast when you are busy but when I had my weekly 15 minutes in the sauna this Sunday, it reminded me that once again one week has passed. I could only think of the proverb written in Latin on the clock hanging in my mother’s kitchen... 'Tempus Fugit', time is fleeing.