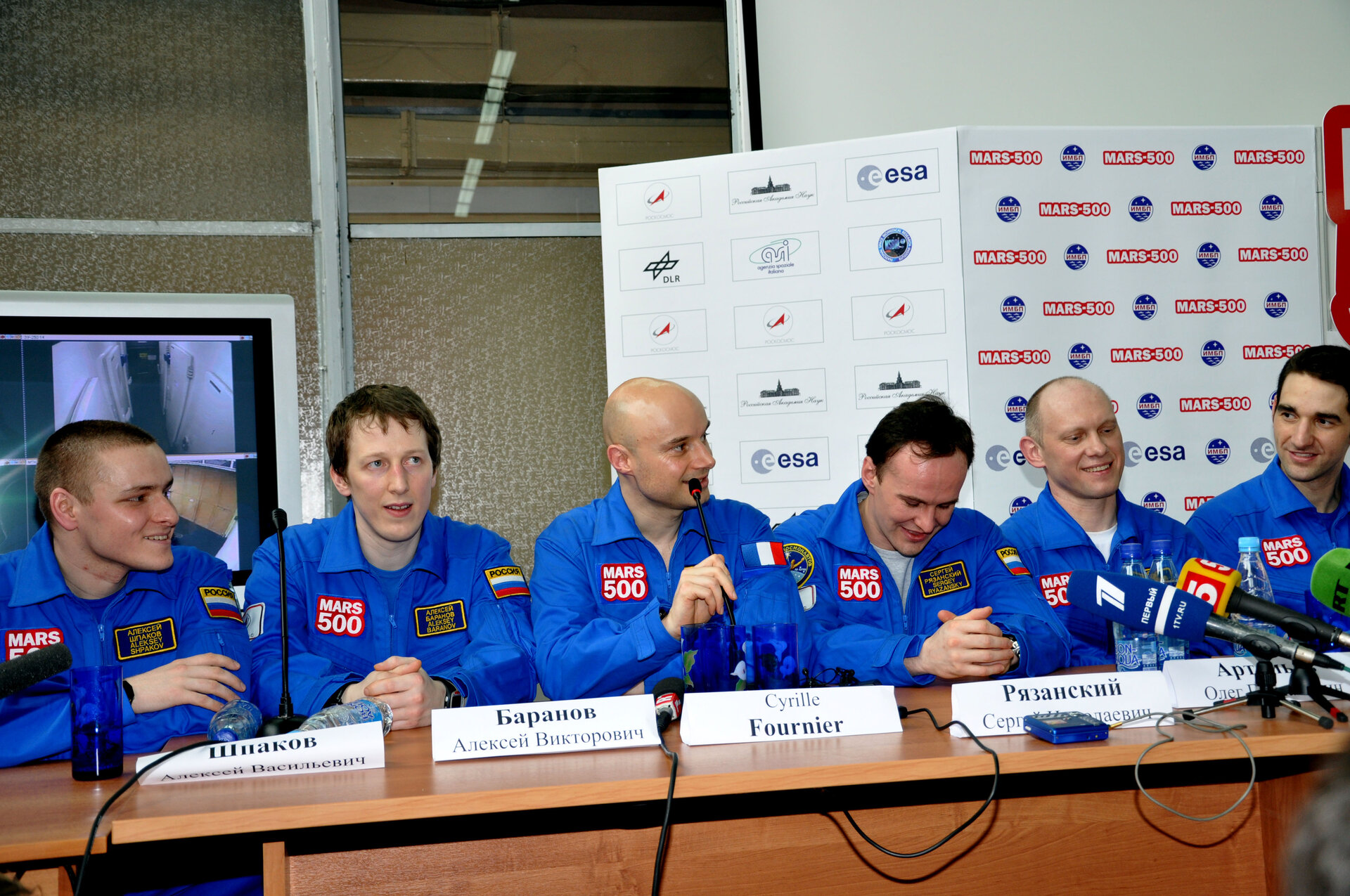 A crew of six today completed their simulated Mars mission after leaving a special isolation facility in Moscow, Russia, for the first time in 105 days. Their mission is part of the Mars500 programme that will help us to understand the psychological and medical aspects of long spaceflights.

Their simulated Mars mission ended at 12:00 CEST (14:00 local time) when the hatch was opened and the crew disembarked for the first time since 31 March. They had been inside the isolation facility at the Institute of Biomedical Problems (IBMP) for a total of 105 days, living and working in close quarters.

“We have successfully completed our mission,” said Oliver Knickel. “This is a big accomplishment that I am very proud of. I hope that the scientific data we have provided over the last months will help to make a mission to Mars possible.”

Inside the isolation facility, the crew has been put through a range of scenarios as if they really were travelling to the Red Planet – including launch, the outward journey, arrival, transfer to and from the martian surface and finally the long journey home.

Their tasks have been similar to those they would have on a real space mission. They have had to deal with simulated emergencies and cope with a communication delay of up to 20 minutes each way.

The participants have also been subjected to scientific experiments to assess the psychological and physiological effects of isolation. The experiments were proposed by research institutes in countries throughout Europe, including Germany, France, Italy, Belgium, Austria and the Netherlands, as well as in Russia and the United States.

The crew has grown some of their own food, such as salad leaves, radishes and cabbage, to supplement the astronaut-style pre-packaged meals. Any spare time has been spent reading, watching films and playing music and games together.

“We had an outstanding team spirit throughout the entire 105 days,” said Cyrille Fournier. “Living for that long in a confined environment can only work if the crew is really getting along with each other. The crew is the crucial key to mission success, which became very evident to me during the 105 days.”

Simonetta Di Pippo, ESA’s Director of Human Spaceflight, was present at the hatch opening and greeted the crew as they stepped out of the module. “The crew have done an excellent job,” said Di Pippo. “I would particularly like to congratulate Oliver and Cyrille – I am proud of their personal and professional contributions to make this 105-day simulation such a success. I am looking forward to the full fledged simulation next year that will run for 520 days. These studies, like many other activities we carry out on Earth in space exploration analogue facilities, will help Europe to move forward in human exploration – making use of the ISS to go back the Moon and one day also beyond.”

This initial 105-day study is the precursor to a complete simulation of a fully-fledged mission to Mars and back due to start in early 2010. That exercise will see another six-member crew sealed in the same chamber to experience a complete 520-day Mars mission.

Both studies are part of the Mars500 programme that is being conducted by ESA and its Russian partner IBMP. ESA’s Directorate of Human Spaceflight is undertaking Mars500 as part of its European Programme for Life and Physical Sciences (ELIPS) to prepare for future missions to the Moon and Mars.