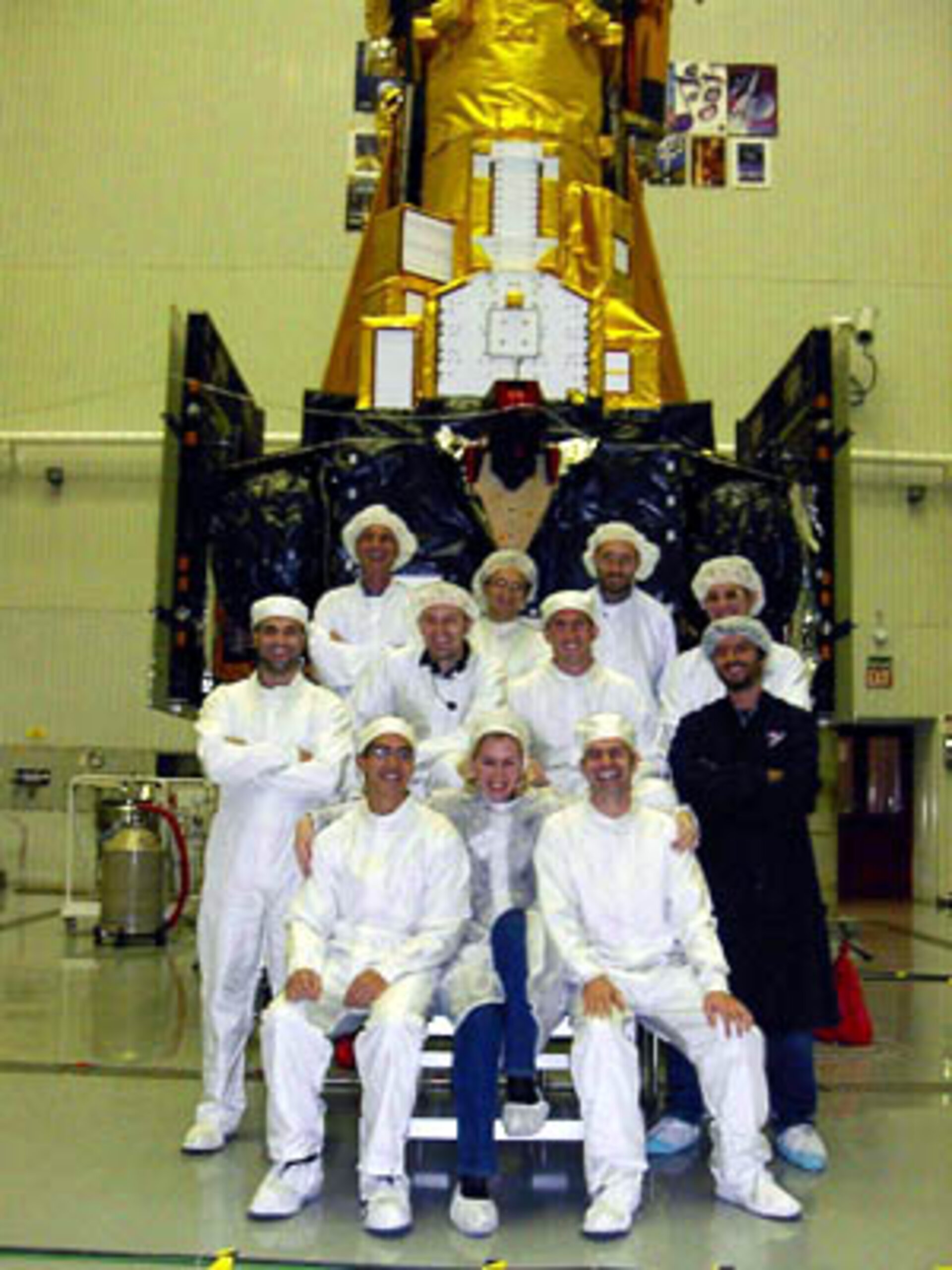 After more than 10 hours of continuous operations in the protective suits known as SCAPE suits, the fueling team has loaded 541 kg of hydrazine into Integral's propellant tanks. The 541 kg includes the quantity needed for the tanks as well as for all the pipes connecting the tanks to the valves and the thrusters.

Activities started at 9:29 in the morning when Martyn Kramer and Juan Flores-Watson, of Astrium UK, were the first to enter the clean room fully dressed in SCAPE suits. Martyn and Juan performed the loading, transferring the hydrazine from the two transfer tanks and then draining all the lines and hoses to a safe level.

SCAPE suits are used to protect the fuelling operators from the toxic effects of hydrazine. Working in these suits for long periods of time is cumbersome and a lot of preparation time is spent making sure breathing air, wireless communications and basic suit adjustment are as confortable as possible.

In the afternoon, Martin Gittins and Adam Walsh, also of Astrium, disconnected all the liquid lines, pressurized the system with nitrogen and configured the system for flight. The test conductors guided the SCAPE operators through the procedure step by step, from the control room, directing operations and checking pressure levels, mass calculations and recording readings from hydrazine sniffing devices. In the Observer Room, a small group followed and checked the completion of the procedure in parallel via TV monitors.

The spacecraft is now fully loaded ready for perigee raise manoeuvres and orbit or attitude corrections. Special thanks from the Integral project to the Astrium team and in particular to Martyn Kramer’s triple performance as procedure writer, SCAPE operator and test conductor.

The Proton team is completing the assembly of the launcher while the fuelling team is busy with final readiness checks prior to fuelling the satellite.

It will take about eight hours to load 540 kg of hydrazine needed to put the spacecraft into a safe configuration. Fuelling is planned for Saturday 21 September. In the meantime, the fuelling team is carrying out the last preparations and checks of the fuelling equipment.

SCAPE suits are used to protect the fuelling operators from the toxic effects of hydrazine. Working in these suits for long periods of time is cumbersome and a lot of preparation time is spent making sure breathing air, wireless communications and basic suit adjustment are as confortable as possible.

The Integral team has completed its first milestone. The two parts of the Integral satellite are now mated again and the satellite is ready for functional testing.

The picture shows Integral prior to mating with both modules side by side. Lifting equipment is then used to lift the payload module shown in the middle of the image and gently lower it on to the service module shown on the right.