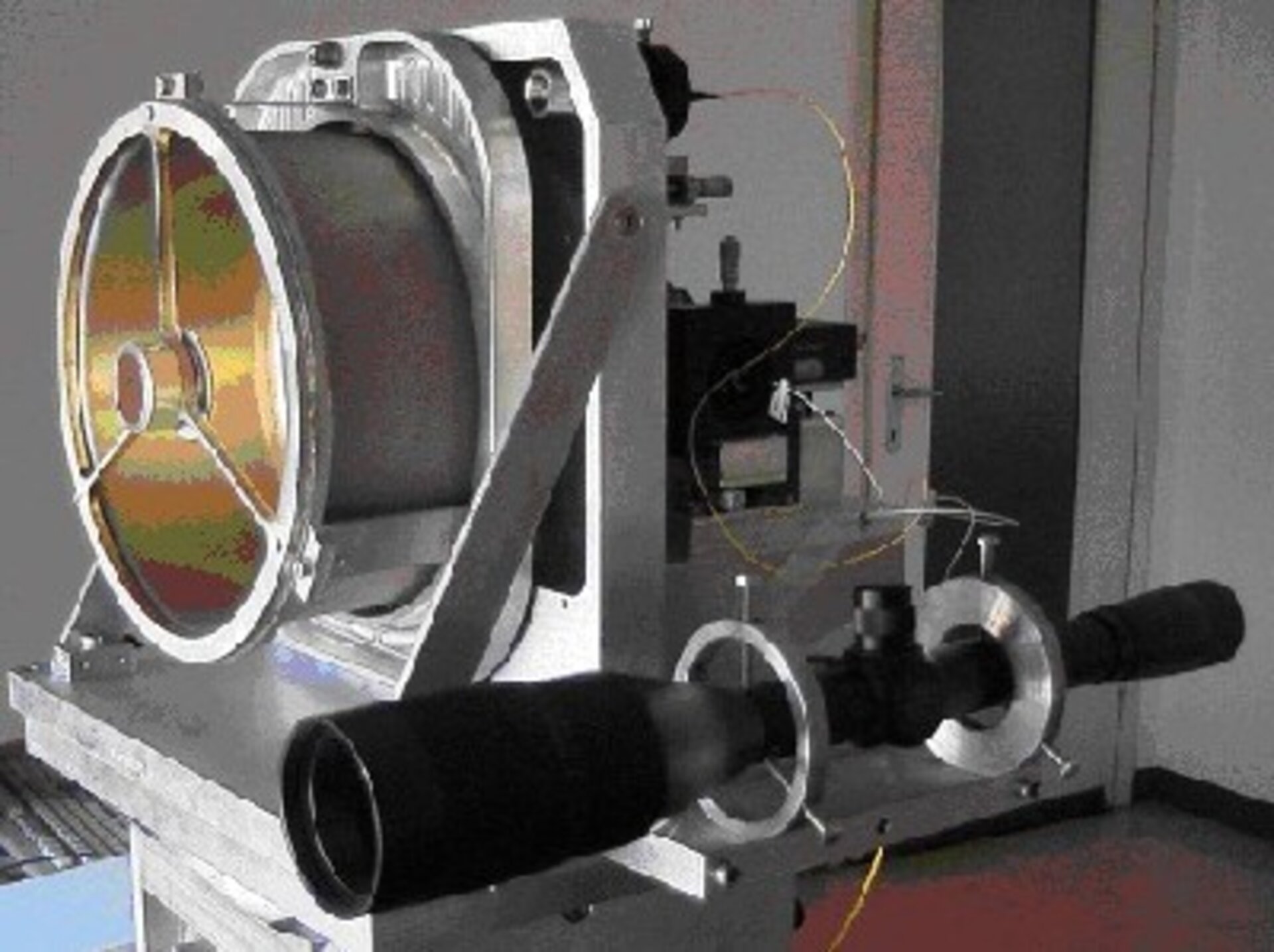 Transporting data communication by light is already well known in optical fibre, but not yet widely used for free space communication on Earth. As a spin-off of the technology developed for the X-ray telescopes for ESA's XMM-Newton Satellite mission, Media Lario has designed and manufactured a lightweight and cost effective free-space optics (FSO) telescope suitable for wireless optical high-speed transmission.

The optical communication terminal is based on a 200 mm diameter Ritchey-Chrétien telescope obtained through high accuracy Nickel electroforming replication technology developed by Media Lario for the mirror shells of XMM-Newton's X-ray Wolter I telescopes. The telescope system was specially designed to make use of worldwide standard off-the-shelf fibre optics technology to be applied to high-speed optical wireless terrestrial, airborne and collocated inter-satellite link communications.

The experimental link on Lake Pusiano in northern Italy that took place over a distance of 1.1 km with a speed of 2.5 Gbit/s introduces substantial innovation in ground-based technologies. High accuracy, robust, light-weight, very compact and, above all, cost-effective aspheric telescope systems can be obtained by nickel replication from suitably designed masters. The electroformed nickel optical mirror-head diameter is only 200 mm and weighs about 1 kg including structure.

Zoran added, "If this is combined with the use of wavelength division multiplexing the bandwidth could be increased to around 25 channels and result in 62.5 Gbit/s wireless data communication."

Media Lario's system design and manufacturing technique of the telescope replace the conventional integration of separate mirrors with a system manufactured in a single shot process in the same material and with the same mechanical and thermal characteristics – including the primary and secondary mirrors, the mechanical support, the baffles, etc. This will play an important role in reducing costs for a future mass-production of telescopes for last-mile communication systems.

Applications could also include communication between collocated satellites, the so-called clustered satellites, used for example for TV-broadcasting with a distance between each other of less than 1000 km. Dietmar Sowieja, Marketing and Sales Manager for Contraves Space in Zurich, agreed during the demonstration event at Lake Pusiano and added, "possible customers are in the airborne military sector and for clusters of satellites."

"FSO can be the solution for point-to-point Giga-Ethernet or LAN-to-LAN connections," added Claudio Colombo, System Engineer from Alcatel Microwave Research and Development in Milan, Italy.

Media Lario has initiated a programme for a family of affordable optical head systems for communication terminals, ranging from ground to airborne and specific space applications. A first important milestone has now been achieved by establishing the stable communication link between two ground-based terminals at a distance of about 1.1 km across the humid air above the lake Pusiano. Large amounts of test data have been sent through the atmosphere at 2.5 Gbit/s data rate under sunny, cloudy, soft and heavy rain conditions. In all cases the system showed itself to be robust and reliable with very low bit error probabilities of below 10-10.

The extensive use of standard off-the-shelf fibre optics telecommunication equipment makes the Media Lario development particularly cost-effective. The opto-electronics is based on the widely used 1550 nm wavelength technology common in fibre optics applications. Direct detection of the incoming light makes the transmitter and receiver opto-electronics much easier and cheaper since the complications of using polarised light, as required by coherent detection, are avoided. Cost effective opto-electronic equipment based on commercial devices has been developed and included in the terminal demonstrator.

The Media Lario terminal architecture offers a large amount of flexibility in the choice of the opto-electronics interface since the light collected by the telescope is directly coupled, without any optical-electrical conversion, to fibre optics, allowing any possible further processing, both optical and electrical. From this point of view the Media Lario terminal is completely transparent and can be used in place of a standard fibre link by a simple 'plug and play' connection.

After the assessment of the system performance on ground, the next goal in Media Lario's Optical Terminal Programme is the development of an airborne terminal demonstrator with the goal to provide a large bandwidth communication capability for internet access, telecom applications and fast data exchange services in the near future.

The final target is, however, a space terminal for collocated satellites in which the versatility of Media Lario's technology and the speed of optical communication will assure fast data relay as required by the information society.

"A long-range on-ground demonstration is definitely the next step to be taken. Then an airborne demonstrator can be envisaged as a mid-term step before going into space," says Dr Bernhard Furch, Head of the Optics Section in ESA's Mechanical Engineering Department.