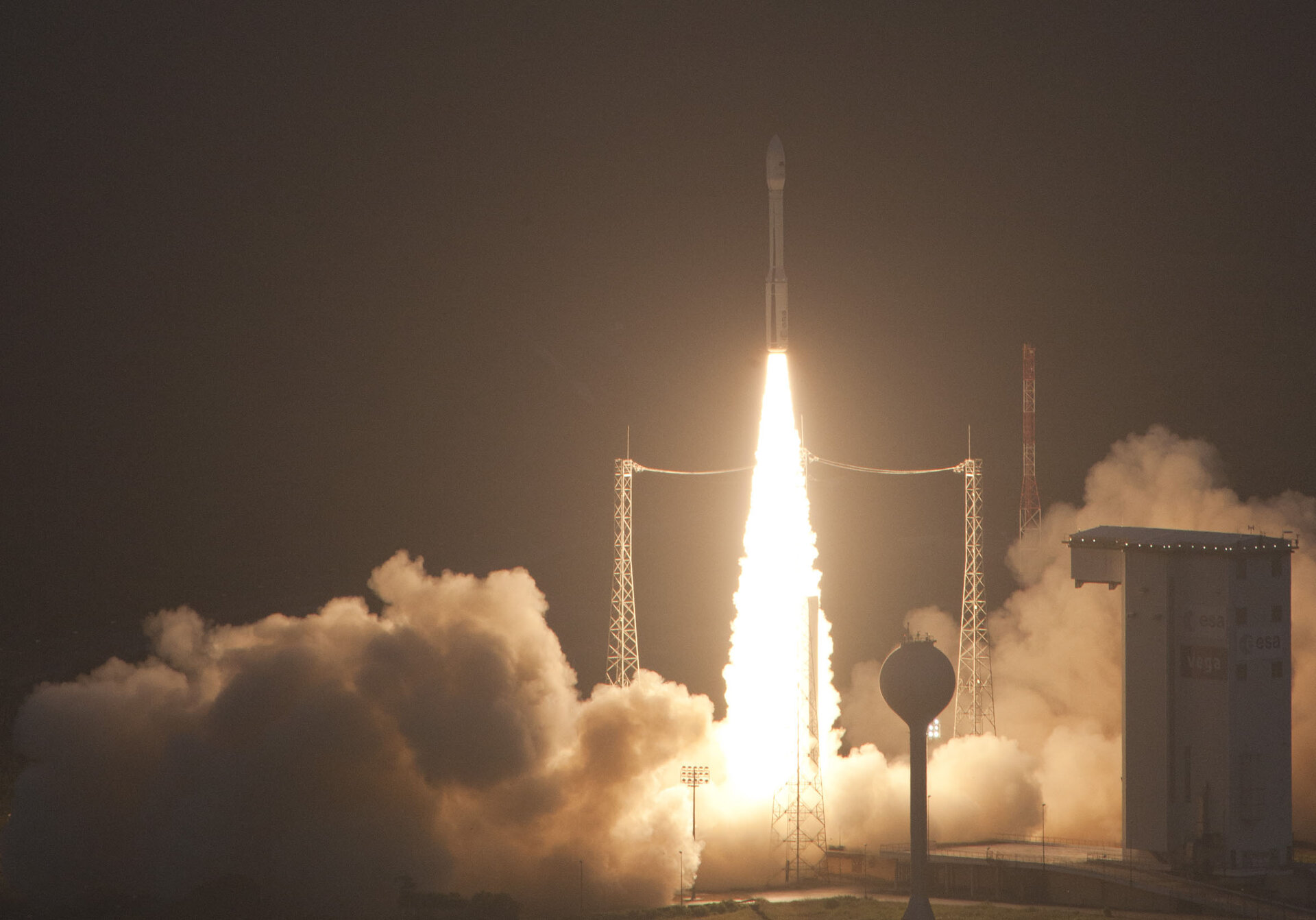 History was made today as ESA’s new Vega launcher lifted off from Kourou spaceport in French Guiana. On board were nine small satellites, including seven ESA- sponsored CubeSats built by teams of students from European universities.

Among these educational payloads were the first satellites ever designed and built in Hungary, Romania and Poland.

The first payload to be released into orbit was the LARES Laser Relativity Satellite from the Italian Space Agency (ASI). Some 16 minutes later, the Vega upper stage motor shut down for the third time, followed immediately by deployment of the seven CubeSats and the University of Bologna’s ALMASat-1 nanosatellite. Ejected from special deployment mechanisms known as P-PODs (Poly-Picosatellite Orbital Deployers), each CubeSat was placed in an elliptical orbit of approximately 300 x 1,450 km altitude.

Over the coming days, the student teams from six European countries will be listening for the first signals from their tiny creations, checking out the satellites’ systems and then conducting the onboard experiments, supported by radio amateurs around the world.

The story of the pioneering picosatellites began as long ago as 2007, when ESA officials decided that the maiden launch of Vega would be an ideal opportunity to fly student-built satellites. Slots were available for at least six cube-shaped satellites, each only 10 cm across and weighing no more than 1 kg.

More than 250 university students in six countries participated in designing and building the seven CubeSats that eventually made it to the launch, along with their innovative technology and science experiments.

Supported by experts from ESA, academic staff from their universities and various national space agencies and institutions, most of the teams succeeded in overcoming numerous logistical and technical challenges to deliver the satellites on time.

“The launch of the CubeSats on Vega is a key milestone for the ESA Education CubeSats programme,” commented Roger Walker, Head of the Tertiary Education Unit at ESA. “It represents a significant achievement for the many young engineers across Europe who had an invaluable hands-on experience working on a satellite mission from its conception through to its operations in orbit,”

“The synergies and the exchange of know-how that ESA established with the university teams and professors will certainly help the students to be better prepared for their future careers,” added Piero Galeone, the ESA Education CubeSats project manager. “Not only have they benefited from increased competence and motivation, but they have been enriched by the experience gained from having participated in this important mission and working with highly qualified professionals.”

The delighted student teams are now all looking forward to operating their tiny spacecraft.

e-st@r team, Italy: “The success of the Vega maiden flight is a great step for all space activities in and outside Europe. We are really excited about it and we are looking forward to communicating with e-st@r in orbit.”

Goliat team, Romania: “This is a major milestone for the long term picosatellite development programme in Romania.”

Masat-1 team, Hungary: “It was a magnificent experience to develop a complete picosatellite and to participate in such a professional launch campaign. With the support of ESA, the first Hungarian satellite is now in orbit. We are very proud and overjoyed, and looking forward to having a technically and scientifically successful mission.”

PW-Sat team, Poland: “We have made history by developing the first Polish satellite. This is the most important moment in our lives.”

Robusta team, France: “This exciting success reminds us of Captain Kirk’s phrase, ‘To boldly go where no (Montpellier) CubeSat has gone before.”

UniCubeSat-GG team, Rome: “We are delighted that the GAUSS team from the School of Aerospace Engineering of Roma has successfully launched its sixth satellite since 2000, and the first CubeSat ever created at the University of Roma, La Sapienza.”

XaTcobeo team, Spain: “Our goal is accomplished. The first space project for the University of Vigo has successfully reached orbit, with the promise of an exciting future.”