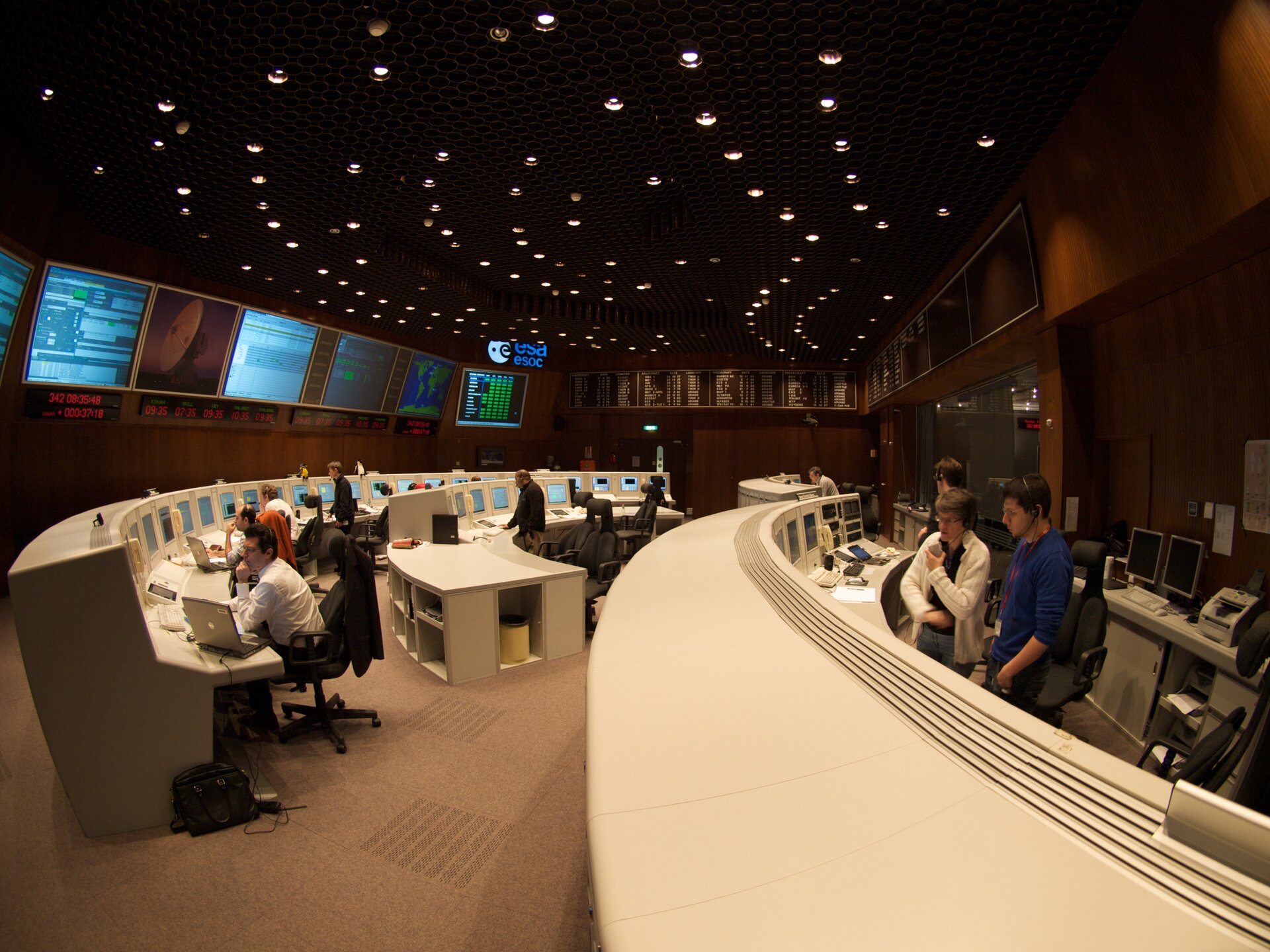 With liftoff scheduled in just a few weeks, ESA's CryoSat-2 ground teams are in intensive training for the launch and early orbit phase - the critical first steps in the mission's life.

CryoSat-2 is scheduled for liftoff on 25 February from the Baikonur launch site in Kazakhstan on a Dnepr - a converted SS-18 intercontinental ballistic missile.

For CryoSat-2, the ground segment - the hardware, software, telecommunications and other resources that operate the satellite and process data received from the instruments - comprises two parts. The Flight Operations Segment is at ESOC, ESA's European Space Operations Centre, Darmstadt, Germany, and the Payload Data Ground Segment is based at ESRIN, ESA's Centre for Earth Observation, Frascati, Italy.

At ESOC, a Flight Control Team will be dedicated to CryoSat-2 throughout its life and will operate the satellite through the demanding LEOP (the launch and early orbit phase), the commissioning phase and into routine operations for an initial three-year period.

At ESRIN, and once the mission is in the routine phase, day-to-day instrument operations will be defined by a dedicated team in coordination with the scientific community and fed back to ESOC for upload to the satellite.

The team at ESRIN are also responsible for processing and distributing the vital science data received from space.

LEOP is the first critical phase in the satellite’s life: time is vital, and teams work 24 hours/day to activate, monitor and verify subsystems on the satellite and undertake crucial orbit and attitude control manoeuvres. Engineers must ensure that the satellite systems are operating as expected and that the orbit is as planned; they must also react to any unexpected problems.

If anything can go wrong, it's most likely to happen during LEOP.

"We began simulation training in August, and through December and January we are conducting five simulations per month – usually two per week – to practise all elements of LEOP as well as the first few days of the mission. It's an intense time for everyone," says Spacecraft Operations Manager (SOM) Nic Mardle.

"Simulation training allows experienced team members to refine their knowledge of the systems and operations and is also a chance to train new engineers, who haven't previously worked on a mission or supported a LEOP," she adds.

During LEOP, the Flight Control Team is not alone: they will be supported by additional ESOC specialists from flight dynamics, the ESTRACK ground station network and other areas, who together comprise the complete Mission Control Team.

Experts from the CryoSat project at ESA's ESTEC establishment and from the prime contractor, Astrium GmbH, who built and tested the satellite, will also be at ESOC for LEOP. The teams will be split into two shifts for 24-hour/day coverage.

Intense training to handle any contingency

In a typical simulation training day at ESOC, the entire CryoSat-2 operations team are put through their paces during a particular period of the mission. Flight controllers sitting on console see 'real' data and results from the satellite, which are generated by a sophisticated CryoSat-2 satellite simulator. This simulator provides realistic feedback to their commands, which must be correct. Once the teams are familiar with all planned operations, the simulation managers inject unexpected faults, errors and system failures, forcing the teams to react as they would have to if, say, a ground station went offline, or a power system on board failed.

"We've even simulated what happens if a team member - or even the SOM - were to be suddenly taken to hospital, which really forces everyone to know each other's jobs and roles," says Mardle.

In addition to the intense LEOP period, several simulation days will be devoted to practising manoeuvres and the commissioning phase, which will run for up to six months after launch. Commissioning will include confirming the operation of all flight control systems and turning on and checking out CryoSat-2's sophisticated payload: SIRAL (Synthetic Aperture Interferometric Radar Altimeter) and DORIS (the Doppler Orbit and Radio Positioning Integration by Satellite receiver).

Mardle, who served as SOM for the first CryoSat mission, which ended when the satellite was lost owing to launcher failure in October 2005, says that CryoSat-2 is no mere replay of a satellite and its ground segment. For flight operations, the new CryoSat-2 represents an almost totally updated set of systems and procedures. The satellite itself is a much improved version, since technology obsolescence, software updates and lessons learnt precluded simply rebuilding the old spacecraft.

"Practically every element of the ground segment at ESOC has changed in one way or another. Whether it is to ensure that the mission can be supported throughout its lifetime or to cope with technology improvements on the satellite, we have had to revalidate every system - and we are doing so with an almost entirely new team. The lessons we learnt from the first CryoSat and implemented on CryoSat-2 have made a significant difference to the ease of operations," she says.

Preparations continue right up to launch

Starting early this month, the Cryosat-2 teams will be back for more simulation training throughout January and February, covering all aspects of the mission and including a full dress rehearsal on 22 February, just three days before launch.

During this rehearsal, the teams will interact with the actual CryoSat-2 satellite mounted on the Dnepr launcher and connected via umbilical cables to the ground segment at ESOC. Engineers will be able to receive real status data from it until just shortly before liftoff.

The last few pre-flight days will also see the ESOC and ESRIN teams working with ESTEC and the industry teams, located both at the launch site and at ESOC, to prepare the satellite in Baikonur for final countdown.

Flight Operations Director Pier Paolo Emanuelli highlights the sense of responsibility felt by everyone working on the mission.

"The Flight Control Team, the Ground Operations Team, Flight Dynamics, personnel working with the ground stations used for LEOP, the teams at ESRIN and ESTEC and the industrial support team are all working extremely hard to ensure readiness for launch. Everyone knows how vital CryoSat-2's polar ice data will be for a better understanding of climate change."