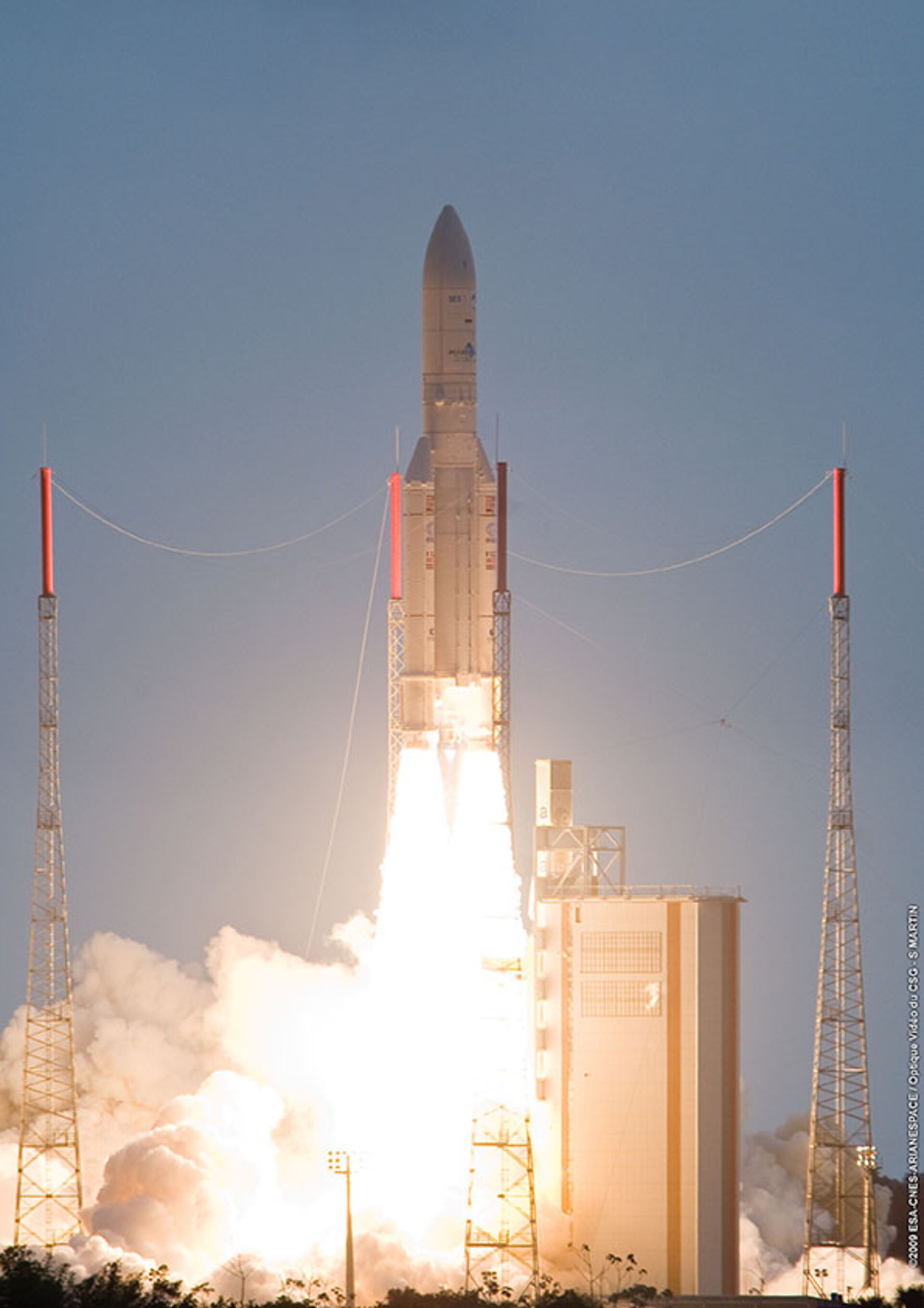 Last night, an Ariane 5 ECA launcher lifted off from Europe’s Spaceport in French Guiana on a journey to place two telecommunications satellites, and Thor 6, into geostationary transfer orbits. Flight V192 was the sixth Ariane 5 launch of 2009 and the fourth dual-payload mission.

Liftoff of the 48th Ariane 5 mission took place at the start of the launch window: 21:00 CET (20:00 UTC; 17:00 French Guiana). The target injection orbit had a perigee altitude of 250 km, an apogee altitude at injection of 35 786 km and an inclination of 6º. The satellites were accurately injected into their transfer orbits about 27 and 31 minutes after liftoff, respectively.

NSS-12 will be located at 57°E and provide direct-to-home coverage using four regional spot beams covering the Middle East and Europe, Central and South Asia and, for the first time, East Africa. High-capacity, high-power hemispheric beams will serve Europe, Africa (including Mauritius) and the Middle East, as well as an area stretching across Asia to Australia. A powerful global beam will reach from the United Kingdom to the Far East.

Thor 6 will be located at 1°W and deliver high-power, direct-to-home television services using transponders, 16 of which will serve the Nordic countries. The other 20 transponders will provide capacity for the growing broadcasting demands across Central and Eastern Europe.

The payload mass for this launch was 9462 kg; the satellite masses totalled 8671 kg, with payload adapters and dispensers making up the additional 791 kg.

Arianespace and Europe’s Spaceport are planning seven Ariane launches during 2009, maintaining the heavy-lift vehicle’s flight rate. The ability to sustain high launch rates has already been demonstrated: during the period from August 2007 to August 2008, there were nine launches (V177 – V185).

Initial construction of the Ariane 5 GS launcher for the seventh flight has been completed and the vehicle stands ready in the Launcher Integration Building (Bâtiment d’Intégration Lanceur; BIL) to be transferred to the Final Assembly Building (Bâtiment d’Assemblage Final; BAF) now it has been vacated by the rollout of V192.

The solid boosters were jettisoned 2 min 21 sec after main engine ignition, and the fairing protecting the payload during the climb through Earth’s atmosphere was discarded at 3 min 9 sec. The launcher’s main engine was shut down at 8 min 52 sec; six seconds later, the main cryogenic stage separated from the upper stage and its payload.

Four seconds after main stage separation, the engine of the cryogenic upper stage was ignited to continue the journey. The engine was shut down at 24 min 45 sec into the flight, at which point the vehicle was travelling at 9400 m/s (33 840 km/h) at an altitude of 600 km. The conditions for geostationary transfer orbit injection had been achieved.