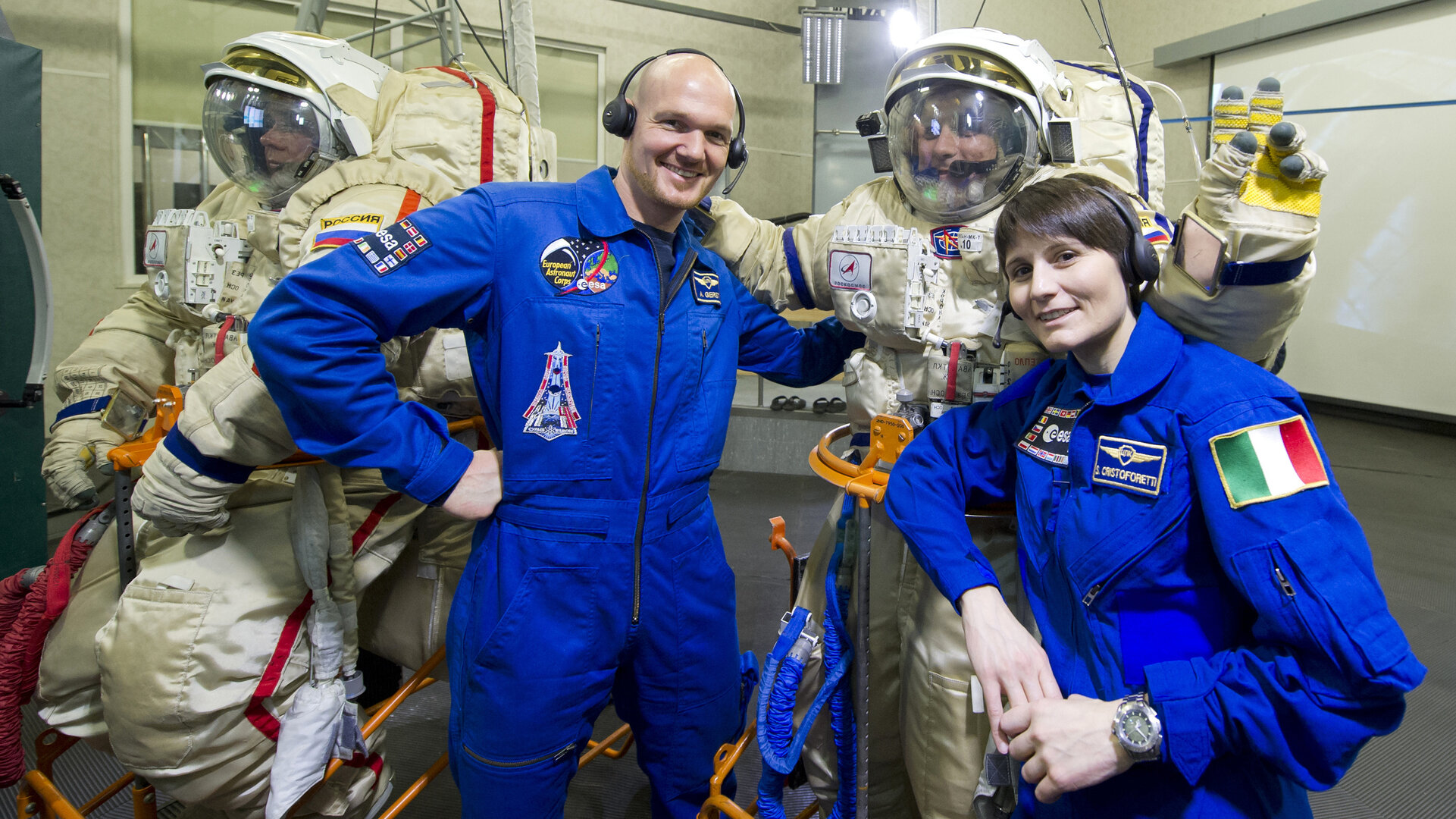 The exploration of the Solar System is one of humanity’s most exciting adventures. ESA selected its first astronauts in 1978 for the 1983 Spacelab mission, taking its first steps into human spaceflight.

How do I apply to become an astronaut?
Currently, ESA does not recruit astronauts. The last selection process took place in 2008, ending in 2009. When we hold a new selection process, we will post an invitation to apply on the ESA website.

What is the ideal age to apply?
The preferred age range is 27 to 37.

What skills and qualifications are needed to apply to be an astronaut? What should I study to become an astronaut?
Astronaut candidates should have scientific knowledge and be able to demonstrate outstanding abilities in appropriate fields of work, including experience showing operational skills.

Applicants must have a Master's degree or equivalent in a scientific discipline such as physics, biology, chemistry, mathematics, engineering or medicine, with at least three years of postgraduate professional experience. This could include working in a lab, conducting research in the field or working in a hospital. Experience as a pilot is a plus.

It is advantageous but not mandatory to have studied aeronautics and astronautics. Above all: no matter what you studied, you should be good at it.

I do not speak English, can I apply?
Applicants must be able to speak and write English well, and it is an advantage to know another foreign language.

I do not speak Russian, can I apply?
Speaking Russian is an asset but not a requirement. This is the second official language on the International Space Station and taught during astronaut training.

Which medical and psychological standards are used to select the candidates?
An ESA astronaut requires a multitude of skills, capabilities and characteristics. One important component of finding someone with the ‘right stuff’ is an assessment of how healthy each applicant is medically and psychologically.

Typical medical and psychological health standards are used. These standards are derived from evidence-based medicine, verified by clinical studies.

Do I need to be fit to become an astronaut? Which sport should I pursue?
It is important to be healthy but ESA does not look for extreme fitness or high-level athletes – over-developed muscles may be a disadvantage for astronauts living in weightlessness.

There is no specific sport that we recommend. Physical activity in general is beneficial to your health. In terms of the selection process, the physical fitness and medical components are either pass or fail. It is not a graduated system.

How can I prepare for the medical tests?
During the medical selection, applicants undergo numerous tests across many areas. Some tests are physically demanding, like bicycle or treadmill exercises. Some may also be invasive and others may be just questionnaires. There is nothing you can do generally to prepare for these medical examinations. If an examination requires specific preparation, such as fasting before giving a blood sample, applicants will receive instructions.

Do astronauts develop serious health problems during their stay in space?
No dangerous conditions develop because of spaceflight. However, spaceflight is hazardous and astronauts’ wellbeing depends on life-support systems. Weightlessness does have negative effects on human physiology such as loss of bone and muscle mass. ESA’s Crew Medical Support Office is responsible for limiting or preventing the space environment from affecting the physical and mental health of astronauts. The environment and life-support systems are monitored and there is a thorough preventive and countermeasure programme.

Is it more difficult for a woman to become an astronaut?
No. The medical and psychological requirements for women and men are identical, aside from some gender-specific medical examinations.

Physical fitness and cardiovascular fitness are always evaluated on an individual basis and target values are adjusted to the physiological differences between men and women. A woman therefore does not have to meet the male norms, or vice-versa.

My vision is not perfect, can I still become an astronaut?
There is no clear answer due to the large number of visual defects that occur. Most disqualifications in the application process are due to vision problems. The main tests to pass include visual acuity, colour perception and 3D vision.

Surgical interventions to correct visual acuity can lead to disqualification, while other surgeries are acceptable – each case is judged individually.

Are there psychological and intellectual requirements?
General characteristics expected of applicants include but are not limited to: good reasoning capability, the ability to work under stress, memory and concentration skills, aptitude for spatial orientation, psychomotor coordination and manual dexterity. A candidate’s personality should show high motivation, flexibility, gregariousness, empathy, non-aggression and emotional stability.

What is an astronaut?
An astronaut is a person trained to command or pilot a spacecraft or serve during a spaceflight. The criteria for the definition of a spaceflight vary, for example, the Fédération Aéronautique Internationale defines it as any flight reaching 100 km altitude.

Is there a centre in Europe for training European astronauts?
Yes, it is the European Astronaut Centre, ESA’s centre in Cologne, Germany.

What is the typical role of an ESA astronaut?
European astronauts join long-duration flights aboard the International Space Station, performing experiments and operating the Station's systems. They assemble, activate and check out new Station elements, undertake scientific research and even act as test subjects in life sciences experiments.

What do astronauts do when they are not training for a flight?
Astronauts provide technical support to spaceflight programmes, maintain their skills and contribute to public relations to explain the importance of space and human spaceflight.

How long is the astronaut training?
There are three phases: basic training, advanced training and mission-specific training.

Immediately after recruitment, astronaut candidates undergo a one-year basic training at their duty station, the European Astronaut Centre. Training begins with information on ESA and other space agencies and their main space programmes. Basic knowledge of space engineering, electrical engineering and science disciplines is provided afterwards. A third block deals with the major systems of the International Space Station and transportation systems such as the Russian Soyuz spacecraft. Basic training concludes by focusing on specific topics such as underwater diving for spacewalk training, robotics, rendezvous and docking, Russian language and human behaviour and performance.

Advanced Training also takes a year and provides astronauts from Space Station partners with knowledge and in-depth skills to operate, service and maintain the Station’s modules, systems, payloads and transport vehicles. The training is more detailed but still generic, supplying expertise that astronauts need for almost any flight to the Space Station. It includes specialisation in some functions, such as resource and data operations, robotics, navigation, maintenance, spacewalks, medical aspects and payloads. Lessons are conducted at all the partner sites to allow first-hand familiarity with flight elements and operations.

The final stage is Increment-Specific Training that gives astronauts the specific knowledge and skills required for their mission.

Is there a height requirement to becoming an astronaut?
Astronaut must be between 153 and 190 cm.

Are there medical examinations in space?
A medical doctor, called a flight surgeon, takes care of each astronaut before, during and after flight. The astronaut and doctor remain in frequent contact to discuss health issues and perform medical tests in space.

In general, there is no doctor on board, but two astronauts are assigned as Crew Medical Officers and are trained to provide medical support during their mission. They offer basic medical support like a paramedic on Earth. There is a medical checklist on the Space Station to help the astronauts diagnose and treat sick or injured crewmembers.

The Crew Medical Officers are supported by physicians called flight surgeons on the ground, who help make clinical decisions and guide the astronauts through the checklist. The crew has access to several medical kits for common drugs, such as aspirin or other mild pharmaceuticals, as well as access to an emergency medical kit with painkillers, anaesthetics, dental medication, bandages, stethoscope, a defibrillator and other advanced life-support tools and medications.

The flight surgeon can talk to the astronauts in a Private Medical Conference once a day on a secure channel for 15 minutes to discuss any medical issues.

What about astronaut's teeth?
Dental problems have happened in the past, to minimise chances of problems astronauts dental conditions are analysed thoroughly before a flight. Fillings can be redone as a precaution. In space a basic emergency dental kit is available. Astronauts get hands-on training at ESA and NASA where they learn how to work with most common dental problems in orbit.

What are the physical effects of a long stay in space?
A long stay in space has many physical consequences, including the loss of muscle and bone mass and strength, reduction of postural control and locomotion, and significant loss of blood volume and reduced cardiovascular capacity. However, these effects are temporary and the ESA Crew Medical Support Office helps each astronaut reduce these and return to normal health upon their return to Earth.

Is it true that astronauts lose bone mass in space? Can it be cured?
Depending on the level of physical exercise and the individual, astronauts can lose about 1% of their bone mass per month in space. The time required to recover this mass after a mission depends on the flight’s duration. For a long flight of around six months, it will take at least six months to return to preflight bone levels. It also depends on physical exercise: exercising during a mission speeds the recovery.

How is an astronaut’s day in space organised?
Each day in orbit (apart from days of rest) is carefully planned by mission control. The 12-hour working day on the Space Station begins with a wake-up call. After a quick rub down with a soapy cloth, the crew has breakfast and runs through the jobs for the day with mission control.

Space stations need constant care and attention. A lot of time is spent on housekeeping chores like cleaning and repairs.

There are three meals with drinks and snacks always available. Much of the crew’s time is spent preparing and performing scientific experiments. This may involve speaking to scientists on Earth.

At least two hours each day are spent on exercise. This is essential to keep the crew fit and healthy. Loading a spacecraft with rubbish and unloading fresh supplies is a major task. Many hours can also be spent getting ready for spacewalks.

How do astronauts eat in space?
Most of their food has to be prepared in a special way to ensure that it can be eaten in weightlessness. The most common preparation for space is dehydration; the astronauts rehydrate it simply by putting it in their mouth or adding water.

How do astronauts go to the toilet in space?
The toilet is designed for use by both males and females. A seat belt and foot restraints hold the astronaut on the seat, while air currents pull waste into receptacles – one for each waste product. Urine is combined with other water waste and faeces are vacuum-dried, chemically treated to remove odour and bacteria, and stored for removal by spacecraft.

How do astronauts sleep in space?
Astronauts cannot lie ‘down’ in a bed because of the weightlessness. Sleeping bags are strapped to bunks to keep them from floating around. Astronauts can sleep standing up, upside-down or even suspended in the air.

What do the astronauts wear in space?
There are no special clothes – astronauts wear ordinary clothes like t-shirts. There is no washing machine on the Space Station, and it is hard to pack enough clothes like underwear or socks, because each kilogram launched into space is very expensive. The result is that they cannot change their clothes every day: underwear is changed every two to three days. On average astronauts get one pair of shorts and a t-shirt every three days for exercising. Their work shirts and trousers/shorts are changed on average once every 10 days. 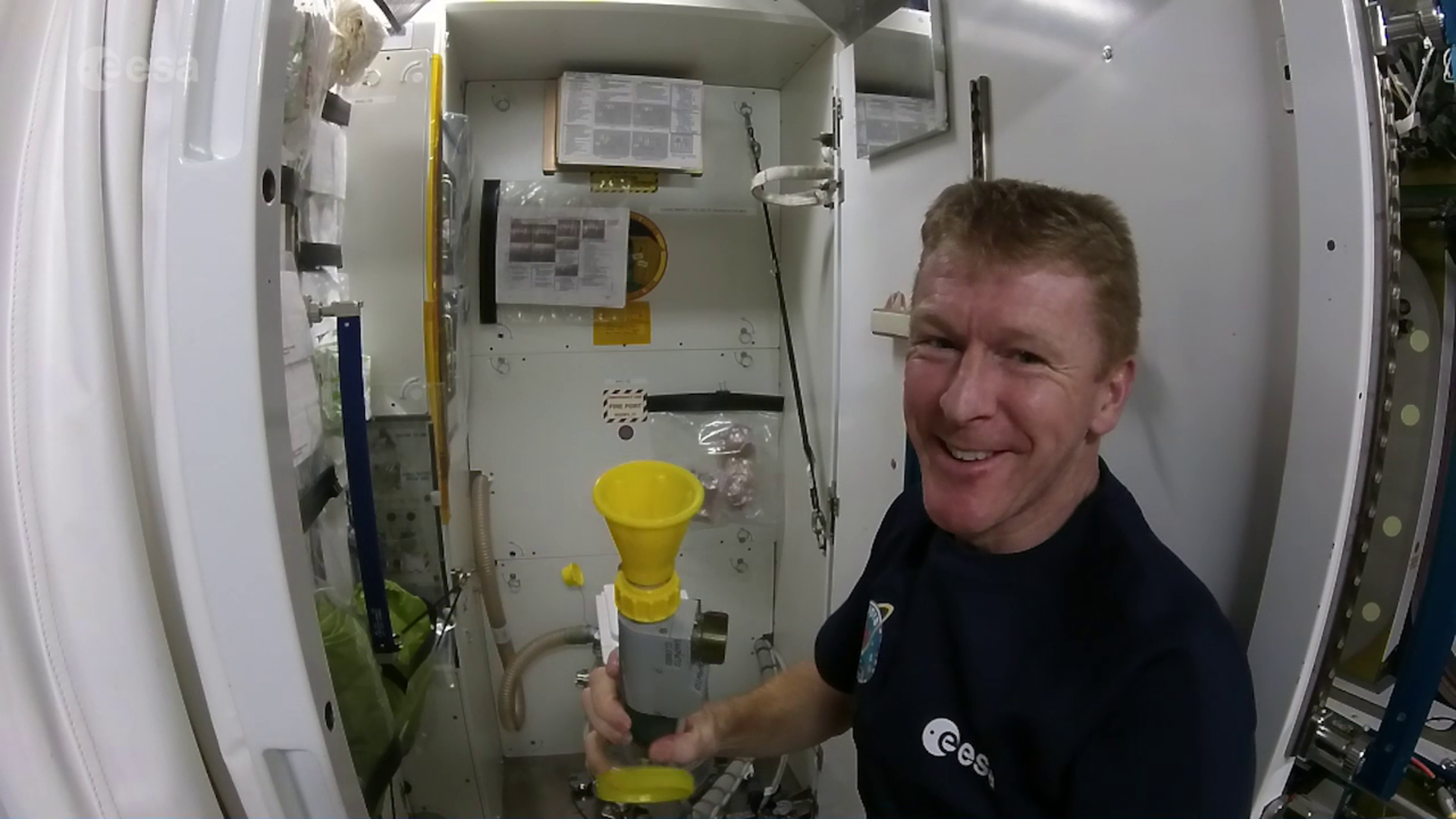