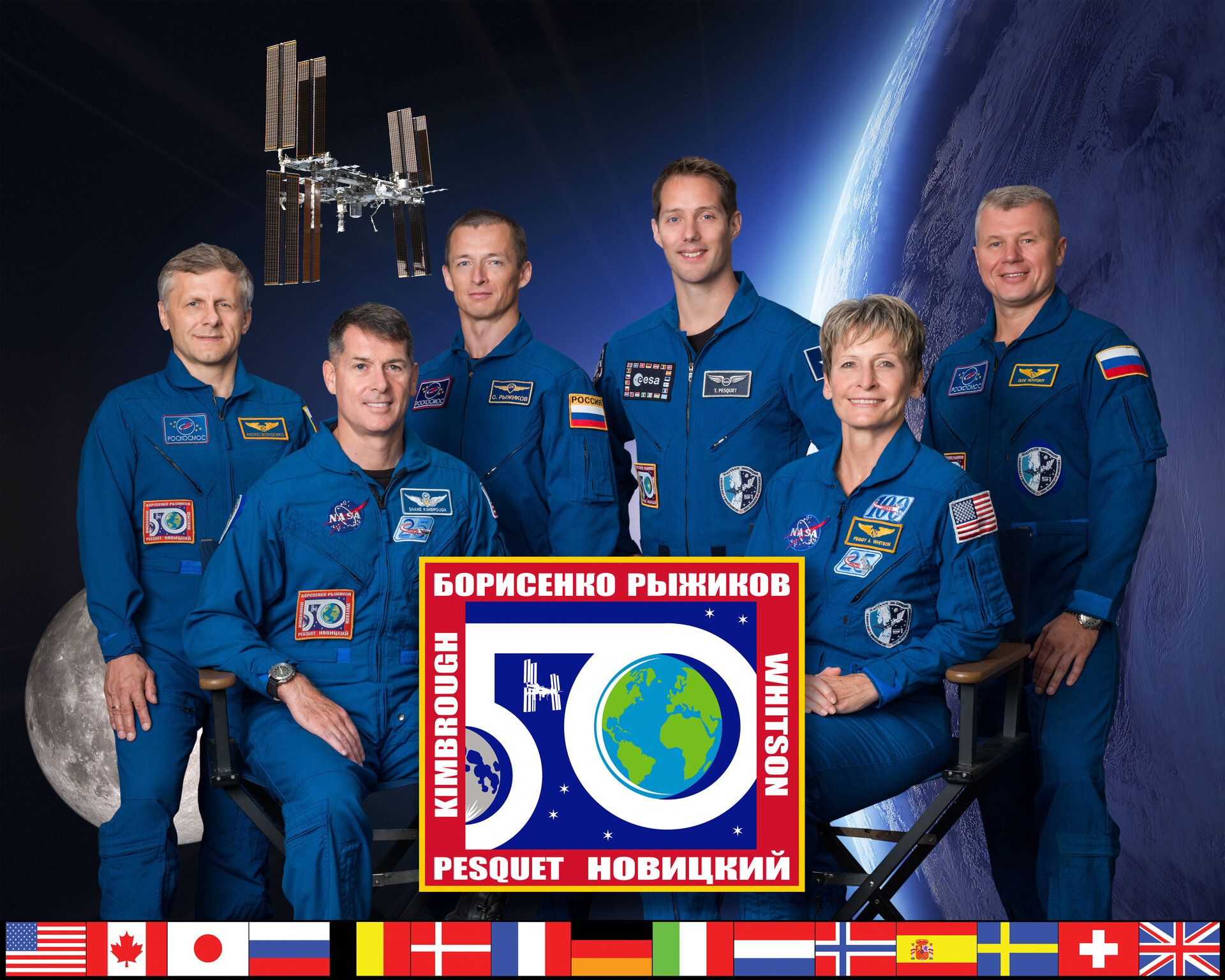 The International Space Station has been continuously occupied since 2000. Because Soyuz capsules ferry only three astronauts at a time and have a limited space warranty, arrivals and departures occur roughly every three months.

Keeping the Station permanently crewed requires careful planning. A few times a year three astronauts leave as a new trio arrives. Crew rotations are called ‘Expeditions’. ESA astronaut Thomas Pesquet was part of Expeditions 50 and 51 and shared his Proxima mission and time on the Station with eight other astronauts.

Russian cosmonaut Oleg Novitsky returnied to space for a second time. Born in 1971 in Belarus, Oleg joined the Russian cosmonaut corps in 2006. His first flight was on Soyuz TMA-06M when he was also commander of the vehicle. Oleg has a background as a pilot in the Russian air force reaching the rank of Lieutenant Colonel before retiring from service.

Oleg was Soyuz commander for the flight to the International Space Station and back, with Thomas acting as second in command.

NASA astronaut Peggy Whitson had spent over a year on the International Space Station in two six-month Expeditions. She was part of Expedition 5 in 2002 on a Space Shuttle to the Station and returned to the Station in 2007 on a Soyuz. Both Expeditions were notable for being a busy period of assembly. Peggy installed the truss ‘backbone’ of the Space Station on her first mission and even did a spacewalk with the Russian Orlan spacesuit. On her second mission she completed five spacewalks to add the Harmony node, ESA’s Columbus laboratory, the Japanese Kibo laboratory and Canada’s robotic arm Dextre.

A biochemist by education, Peggy has a PhD and many awards as well as two patents to her name. Peggy took over command of the Space Station for a second time during the Proxima mission as Expedition 51 commander.

Peggy returned home in September 2017 on the Soyuz from an extended 288-day mission to the Space Station. During her stay, she set a new record for the most cumulative time in space by an American astronaut with 665 days.

Already on the Station

NASA astronaut Shane Kimbrough was an aviator in the US army before becoming an astronaut in 2004. His first spaceflight started 14 November 2008 on Space Shuttle Endeavour, returning to Earth 30 November. The mission lasted only 16 days but he conducted two spacewalks that lasted over 12 hours in total. Shane was born in Texas in 1967.

Andrei Borisenko was selected as cosmonaut in 2003 after a career in spacecraft flight control and dynamics working on the Russian Mir space station as well as working as flight director at Moscow mission control for both Mir and the International Space Station.

Andrei’s first spaceflight was aboard Soyuz TMA-21 in 2011 to join Expedition 27 with ESA astronaut Paolo Nespoli amongst others. Andrei took over command of the Space Station for Expedition 28.

Born in 1974, Sergei Ryzhikov was commander of the Soyuz MS-02 spacecraft that took Expedition 49 to the International Space Station. Another lieutenant colonel from the Russian air force Sergei was selected as cosmonaut in 2006.

Alexander Misurkin was a major in the Russian air force before he was selected in 2006 to become a cosmonaut. Among his duties and accomplishments, he is a first-class instructor-pilot and has logged 1600 hours of flight time in jet-trainer aircraft for the Russian air force.

His first spaceflight was in 2012 as part of Expeditions 35 and 36 on Soyuz TMA-08M – one of the first astronaut flights to reach the International Space Station just six hours after launch. During his mission he conducted three spacewalks.

The cosmonaut completed his second spaceflight in February 2018 as part of Expeditions 53 and 54.

Alexander has undergone extreme survival training courses, both in the desert and at sea. In his spare time, the cosmonaut enjoys alpine skiing and karting.

Joe Acaba logged a total of 306 days in space and conducted three spacewalks over three missions. In 2009, Acaba flew on the Space Shuttle Discovery to the International Space Station to deliver the final pair of power-generating solar array wings and a truss element.

During his second mission the first commercial resupply spacecraft, SpaceX Dragon, arrived at the station. The NASA astronaut completed his third spaceflight in February 2018 as part of Expeditions 53 and 54.

This was NASA astronaut Mark Vande Hei’s first spaceflight. He served as a flight engineer for Expeditions 53 and 54 on the International Space Station.

Mark has a background in physics and engineering, was in the US army before working at NASA as a Capcom at mission control in 2006. In 2009 he was selected as an astronaut – the same year as ESA astronaut Thomas Pesquet. Mark finished his astronaut training in 2011.

Mark and Thomas are both aquanauts having spent eight days living in an underwater habitat as part of NASA’s underwater simulated space missions NEEMO.