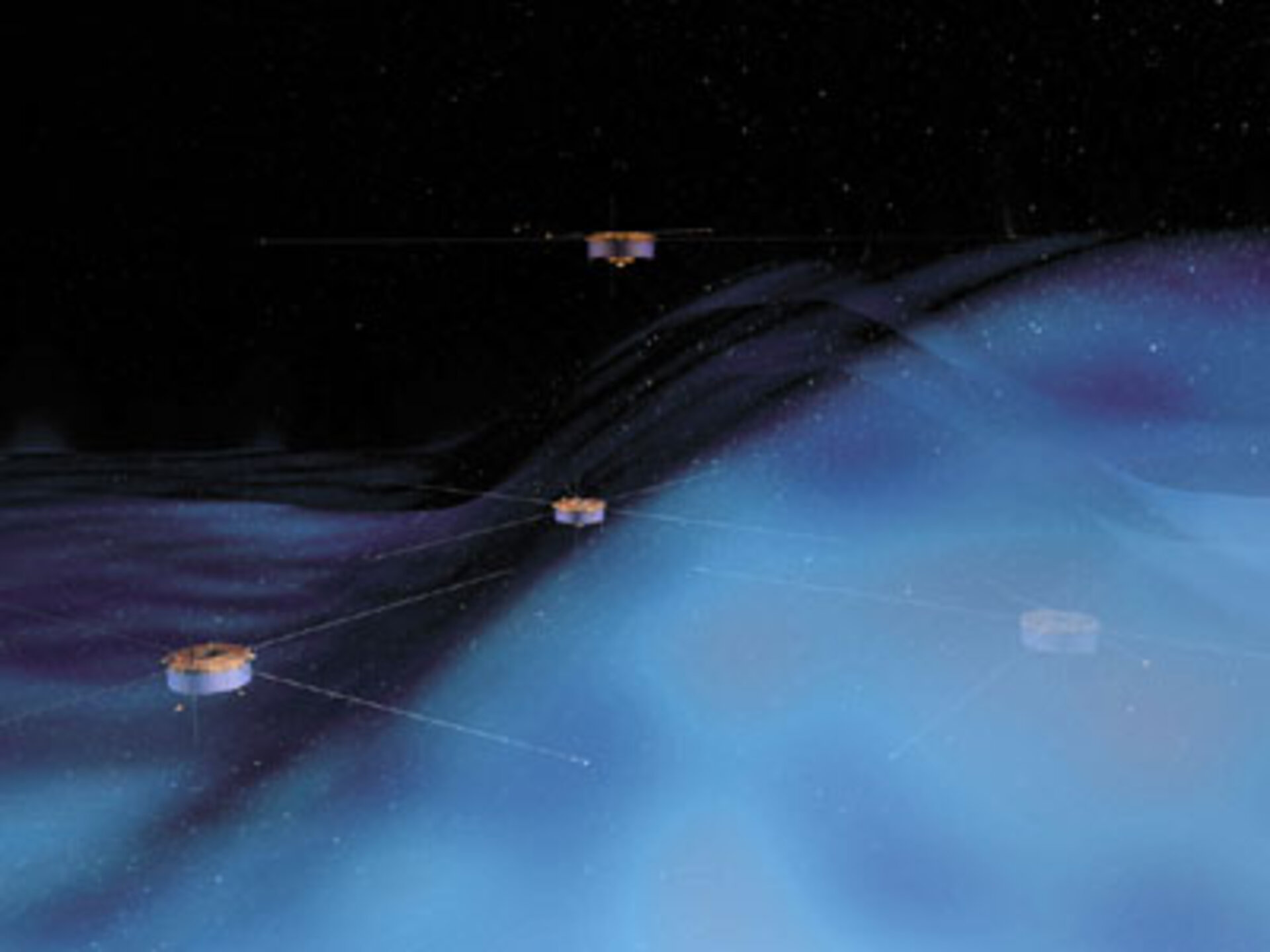 ESA's quartet of Cluster spacecraft joined in the flurry of interest in this week's extreme solar activity, and saw Earth's magnetosphere halved in size.

Cluster is a fleet of four spacecraft flying in formation around Earth. Their mission, lasting until 2005, is to complete the most detailed investigation ever made into the ways in which the Sun and Earth interact. They relay information about how the solar wind affects our planet in three dimensions.

Our planet is surrounded by a protective magnetic shield - the magnetosphere - that shelters the Earth from most of the charged particles that are blasted across interplanetary space by explosions on the Sun. The magnetosphere varies in size and shape, and its outer boundary - the magnetopause - gently undulates like a wave due to buffeting by the solar wind.

Because the four Cluster spacecraft have been positioned around the magnetopause since 2001, they have spent several years passing in and out of our planet's magnetosphere. Normally, at this time of year the spacecraft are inside the magnetopause.

However, this week, ESA's Cluster scientists saw a huge compression of the magnetosphere, which was squashed to about half of its usual size by the 'pressure' of the particles recently ejected by the Sun. These particles come from an earlier coronal mass ejection (CME) on the 24 October. The results from the event on the 28 October have yet to be seen.

All four Cluster spacecraft were out of the magnetosphere when they should have been inside. This is a very unusual position for the magnetopause, which on the average is projects outward from our planet to a distance equivalent to about 10 times the radius of the Earth.

Such compressions can have dramatic space weather effects, particularly to geostationary satellites which are orbiting the Earth at a distance of about six Earth radii.

Further analysis of the data from the four spacecraft will tell us at what speed the magnetopause moved which will give information on the strength of the CME.

Brought back to life...

As an interesting aside, there is some good news from the Cluster team. In contrast to the concerns about potential damage to satellites, one instrument on Cluster actually benefited from the solar storm.

A small component (an analogue-to-digital converter) that failed a few weeks ago was brought back to life. Although we can't be sure, the scientists think that this might have been due to interaction with the energetic particles from the Sun's outburst.

Since then, the Cluster spacecraft have made regular measurements of the magnetopause. One of the earliest interesting discoveries has been the confirmation of the existence of waves along this ever-shifting boundary in space.

"They are like waves that form on the surface of a lake when the wind is blowing," said Cluster Project Scientist, Philippe Escoubet. "The Cluster spacecraft give us for the first time the size and speed of these waves."

"Cluster has given us the first observational proof that these waves exist," said Dr. Nicole Cornilleau-Wehrlin of CETP in Vélizy, Principal Investigator on the STAFF experiment. "Further studies will enable us to discover more about what happens and why."

By late December, the elliptical Cluster orbits carried the quartet close to a huge shock wave in near-Earth space. This bow shock, which lies some 100,000 km from the planet, forms when particles in the solar wind slow to subsonic speeds after slamming into Earth’s magnetic shield at more than 1 million km/h. Cluster’s battery of instruments is beginning to record in great detail what happens at this turbulent barrier.

Once again, gusts in the stream of solar particles caused the magnetosphere to behave like a punchbag undergoing heavy body blows. These "punches" caused the bow shock to migrate through space, crossing and recrossing the Cluster spacecraft at irregular intervals.

"This is the first time we have ever seen the bow shock in such remarkable detail," said Professor André Balogh of Imperial College London, the Principal Investigator for the FGM experiment on Cluster.

Comparisons of spacecraft measurements will also be invaluable for in-depth studies of other parts of the magnetosphere. Of particular interest to scientists are the cusps - funnel-shaped gaps in the Earth’s magnetic shield that that guide electrified particles into the upper atmosphere.

The first Cluster observations of the north polar cusp were made on 14 January 2001, when shifts in the solar wind caused the spacecraft to pass right through this narrow "window" in the magnetic envelope at an altitude of about 64,000 km. The EISCAT ground-based radar in Svalbard, which lay beneath the Cluster spacecraft at that time, confirmed the abrupt change in the cusp’s position.

Preliminary analysis of data from Cluster indicates that the upper regions of the cusp were moving through space at around 30 km/s. Further studies of the different data sets are expected to provide valuable new insights into the physical processes taking place in these key regions above the Earth's magnetic poles.

"This is a very dynamic region, but it has only been studied previously by single spacecraft," said Dr. Escoubet. "This is why the Cluster measurements are so important. With four spacecraft we can obtain the most accurate, three-dimensional view of what is happening around our planet."

Cluster and the Solar and Heliospheric Observatory (SOHO) make up the Solar-Terrestrial Science Programme - one of the Cornerstones of ESA’s Horizons 2000 long term science plan. Together, they are playing key roles in international efforts to investigate the physical interaction between the Sun and Earth.