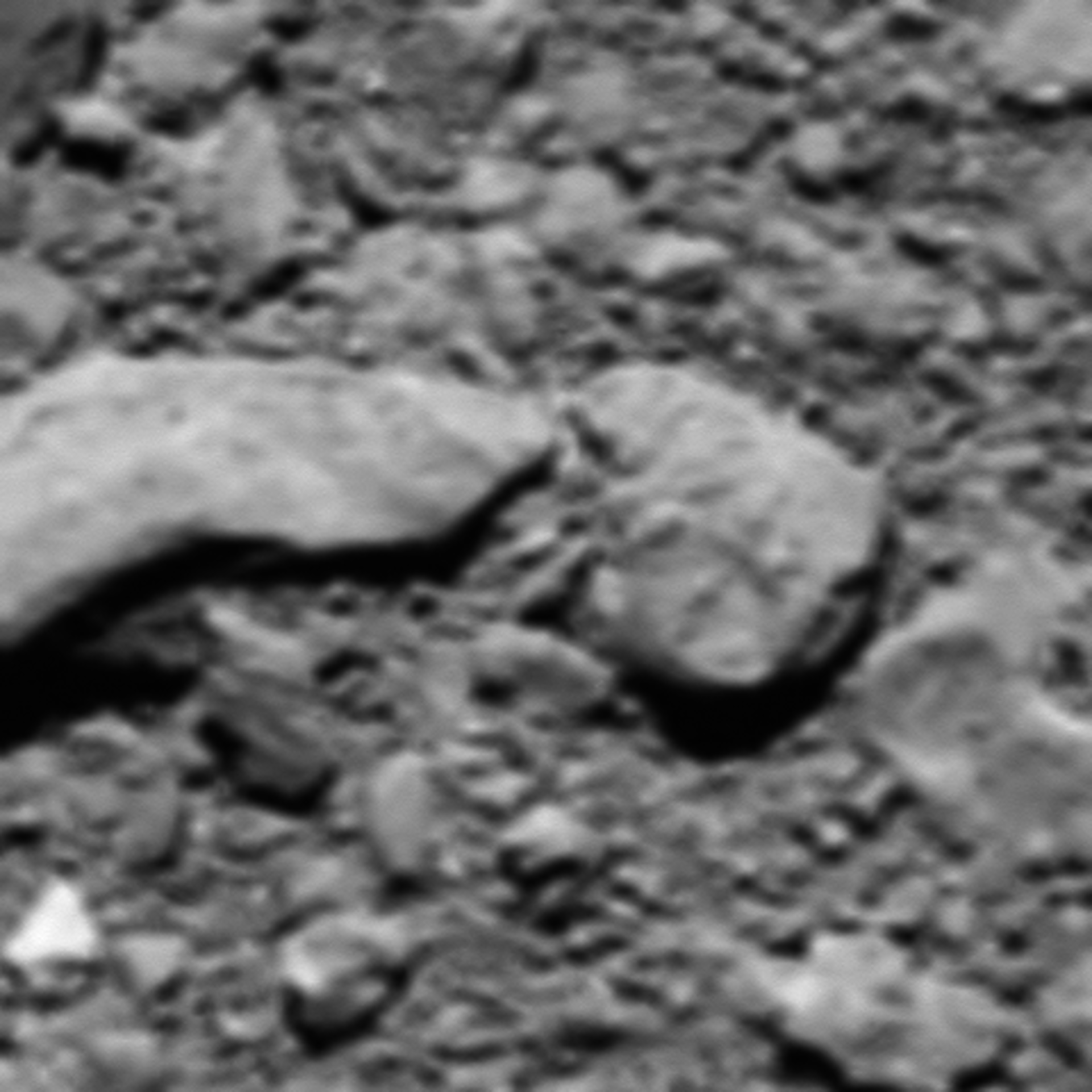 Scientists analysing the final telemetry sent by Rosetta immediately before it shut down on the surface of the comet last year have reconstructed one last image of its touchdown site.

After more than 12 years in space, and two years following Comet 67P/Churyumov–Gerasimenko as they orbited the Sun, Rosetta’s historic mission concluded on 30 September with the spacecraft descending onto the comet in a region hosting several ancient pits.

It returned a wealth of detailed images and scientific data on the comet’s gas, dust and plasma as it drew closer to the surface.

But there was one last surprise in store for the camera team, who managed to reconstruct the final telemetry packets into a sharp image.

“The last complete image transmitted from Rosetta was the final one that we saw arriving back on Earth in one piece moments before the touchdown at Sais,” says Holger Sierks, principal investigator for the OSIRIS camera at the Max Planck Institute for Solar System Research in Göttingen, Germany.

“Later, we found a few telemetry packets on our server and thought, wow, that could be another image.”

During operations, images were split into telemetry packets aboard Rosetta before they were transmitted to Earth. In the case of the last images taken before touchdown, the image data, corresponding to 23 048 bytes per image, were split into six packets.

For the very last image the transmission was interrupted after three full packets were received, with 12 228 bytes received in total, or just over half of a complete image. This was not recognised as an image by the automatic processing software, but the engineers in Göttingen could make sense of these data fragments to reconstruct the image.

Owing to the onboard compression software, the data were not sent pixel-by-pixel but rather layer-by-layer, which gives an increasing level of detail with each layer.

That is, it gets a lot blurrier as you zoom in compared with a full-quality image. This can be likened to compressing an image to send via email, versus an uncompressed version that you would print out and hang on your wall.

The camera was not designed to be used below a few hundred metres from the surface but a sharper image could be achieved using the camera in a special configuration: while the camera was designed to be operated with a colour filter in the optical beam, this was removed for the last images. This would have resulted in the images being blurred for the normal imaging scenario above 300 m, but they came into focus at a ‘sweet spot’ of 15 m distance.

Approaching 15 m therefore improved the focus and thus level of detail, as can be seen in the reconstructed image taken from an altitude of 17.9–21.0 m and corresponding to a 1 x 1 m square region on the surface.

In the meantime, the altitude of the previously published last image has been revised to 23.3–26.2 m. The uncertainty arises from the exact method of altitude calculation and the comet shape model used.

The sequence of images progressively reveals more and more detail of the boulder-strewn surface, providing a lasting impression of Rosetta’s touchdown site.

Notes for Editors
The reconstructed image was presented in an ESA TV transmission earlier this year. Watch it here.