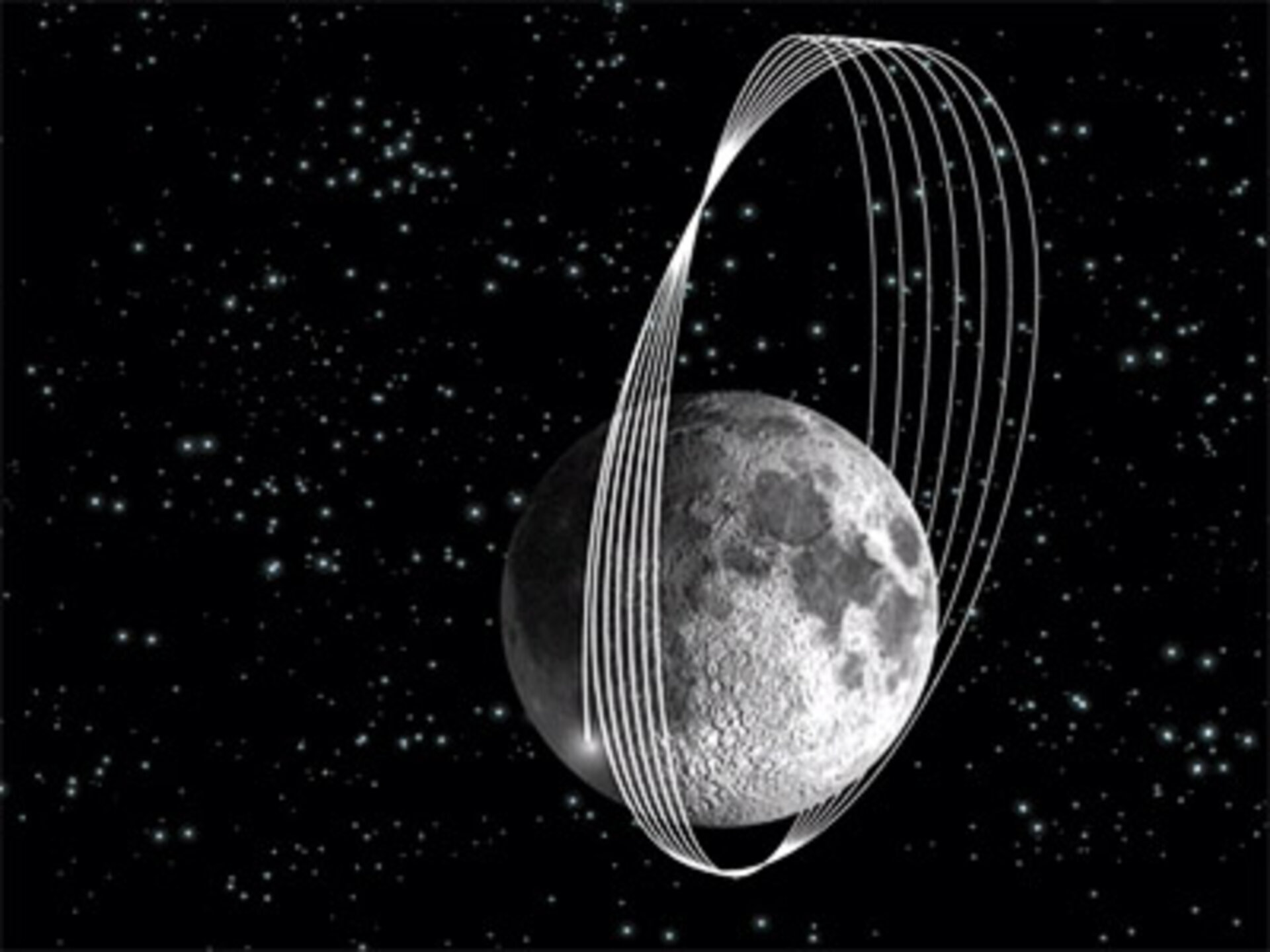 SMART-1, the successful first European spacecraft to the Moon, is now about to end its exploration adventure, after almost sixteen months of lunar science investigations.

SMART-1 was launched on 27 September 2003, and it reached the Moon in November 2004 after a long spiralling around Earth. In this phase, the spacecraft tested for the first time in space a series of advanced technologies.

These included the first use of an ion engine (solar electric propulsion) for interplanetary travels, in combination with gravity assist manoeuvres.

Initially planned to operate six months around the Moon, SMART-1 was later given a mission extension of one further year, now about to be concluded. The spacecraft will hit the Moon surface through a small impact currently expected for 3 September 2006, at 07:41 CEST (05:41 UT) or at 02:36 CEST (00:36 UT), with an uncertainty due to the incomplete knowledge of the lunar topography. The expected coordinates for impact at 07:41 CEST are about 36.44º South of latitude and 46.25º West of longitude. The expected coordinates for an earlier impact at 02:36 CEST are 36.4º South of latitude and 43.5º West of longitude.

Manoeuvres up to impact

If left on the course of its lunar orbit, SMART-1 would have naturally hit the Moon on 17 August 2006 on the lunar far side, not visible from Earth.

A 2-week series of manoeuvres started on 19 June and concluded on 2 July allowed SMART-1 to adjust its orbit to avoid having the spacecraft intersect with the Moon at a disadvantageous time from the scientific point of view, and to obtain a useful small mission ‘extension’.

A further series of minor manoeuvres may be performed on 27 and 28 July, 25 August and on 1 and 2 September 2006 to adjust the SMART-1 trajectory.

The choice of 3 September for lunar impact was led by the decision to obtain further high resolution lunar data from orbit and to allow ground telescopes to see the impact from Earth.

On 3 September 2006 the SMART-1 perilune, coinciding with the point of impact, will be on the lunar area called ‘Lake of Excellence’, located at mid-southern latitudes. This area is very interesting from the scientific point of view. It is a volcanic plain area surrounded by highlands, but also characterised by ground mineral heterogeneities.

At the time of impact, this area will be in the dark on the near-side of the Moon, just near the terminator – the line separating the lunar day-side from the night-side. The region will be shadowed from the Sun’s direct rays, but it will be lit faintly by the light from the Earth – by earthshine. The spacecraft’s orbit will take it over the region every five hours, getting one kilometre lower at each pass. From Earth, a Moon quarter will be visible at that time.

This geometry is ideal to allow ground observations. In fact, during full Moon the luminosity would have completely obscured the impact to ground observers, and during new Moon it would have been difficult as well, because new Moon is visible only for a few seconds after sunset. Furthermore, an impact in the dark will favour the detection of the impact flash.

The ground telescopes will also try to observe the dust ejected by the impact, hoping to obtain physical and mineralogical data on the surface excavated by the spacecraft.

The expected impact time (07:41 CEST ) will be good for big telescopes in South and Northwest Americas and Hawaii and possibly Australia. But if SMART-1 hits a hill on its previous pass, around 02:37 CEST on 3 September, then it can be observed from the Canary Islands and South America. If SMART-1 hits a hill on the pass on 2 September at 21:33 CEST, then telescopes in Continental Europe and Africa will have the advantage.

When a spacecraft orbits around the Moon, as SMART-1 does, it is doomed by the law of gravity. Tugs from the Sun, the Earth, and irregularities in the Moon itself, all disturb its orbit. Sooner or later, any lunar orbiter will impact the Moon surface unless it has very big amounts of fuel left to be re-boosted and escape the lunar gravity.

To break away from the Moon’s gravity and go off into deep space would have meant cancelling the SMART-1 science programme entirely. In fact, by the time SMART-1 was in its orbit around the Moon, there was enough propellant left for an orbital boost, but not for an escape, so the spacecraft was a true ‘prisoner’ of the Moon.

SMART-1 has survived far longer than the SMART-1 team expected when the original 6-month scientific mission was planned. Its experimental ion engine, powered by the Sun, was very efficient. By the time SMART-1 had settled into its operational orbit around the Moon in March 2005 there was only 7 kilograms of propellant left (bottled xenon gas) out of the 84 kilograms available at launch.

ESA engineers used all the remaining xenon to avoid an early impact initially due in September 2005, after a manoeuvres to re-boost the orbit. As a result, SMART-1 gained an extra year of operational life in its lunar orbit, to the great benefit of Europe’s space scientists and engineers.

Out of xenon propellant, SMART-1 used its hydrazine thrusters to perform the last major manoeuvre at the end of June 2006 to further stretch the mission lifetime and win three more weeks of operations.

Any harm for the Moon?

Nearly 50 years ago, in 1959, the Russian Luna-2 spacecraft was the first man-made object to hit the Moon. Since then many others have done the same, without any noticeable harm, and SMART-1’s impact will be softer than that of any man-made impactor up till now.

Possibly SMART-1 will skid for a short distance after impact, throwing up dust ahead of it and spraying dust out on either side like the wings of a butterfly. The crater made by SMART-1 will be 3 to 10 metres wide and perhaps a metre deep. The Moon already has 100 000 craters that are more than four kilometres wide, and every day several small meteoroids make craters as big as SMART-1’s.

Every chemical element present on SMART-1 and in its equipment exists naturally on the Moon. For instance aluminium and iron are very common. Hydrogen, carbon and nitrogen are much scarcer on the Moon, but they arrive naturally onto the surface from the solar wind and from the impacts of icy fragments of comets, which contain many elements. From this point of view, one can think of SMART-1 as an artificial comet. Furthermore, the little hydrazine left in the SMART-1 thrusters will burn immediately at impact.

The last observations before impact will provide new impressions of the lunar landscapes.

During close lunar approaches, the AMIE camera on board SMART-1 will have oblique views of some areas that we have previously looked at only vertically, providing a sort of 3-dimensional view of the surface. However, as the impact will occur in a dark area of the Moon, it is not possible to expect to see very much by visible light during the final descent.

During the last orbits, the other instruments on-board, including the D-CIXS X-ray telescope and the SIR infrared spectrometer, will have detailed views of some lunar regions from very low altitudes.

Powerful telescopes on the Earth may see a faint flash from the impact itself, followed by a cloud of dust thrown up by the impact, perhaps 5 kilometres wide. The dust will obscure the view of part of the Moon’s surface for 5 or 10 minutes. The behaviour of the cloud will give valuable information about impact events in general, while the analysis of the light from the dust, with spectrographs in the telescopes, may detect materials dug up by the impact from just beneath the lunar surface.

The observations will rely on the faint glow of earthshine – unless some of the dust cloud is thrown more than 20 kilometres above the lunar surface. In that case, it will be lit directly by sunlight and will appear far brighter for perhaps a few minutes. Amateur astronomers may be able to spot the sunlit dust cloud with their binoculars and small telescopes.