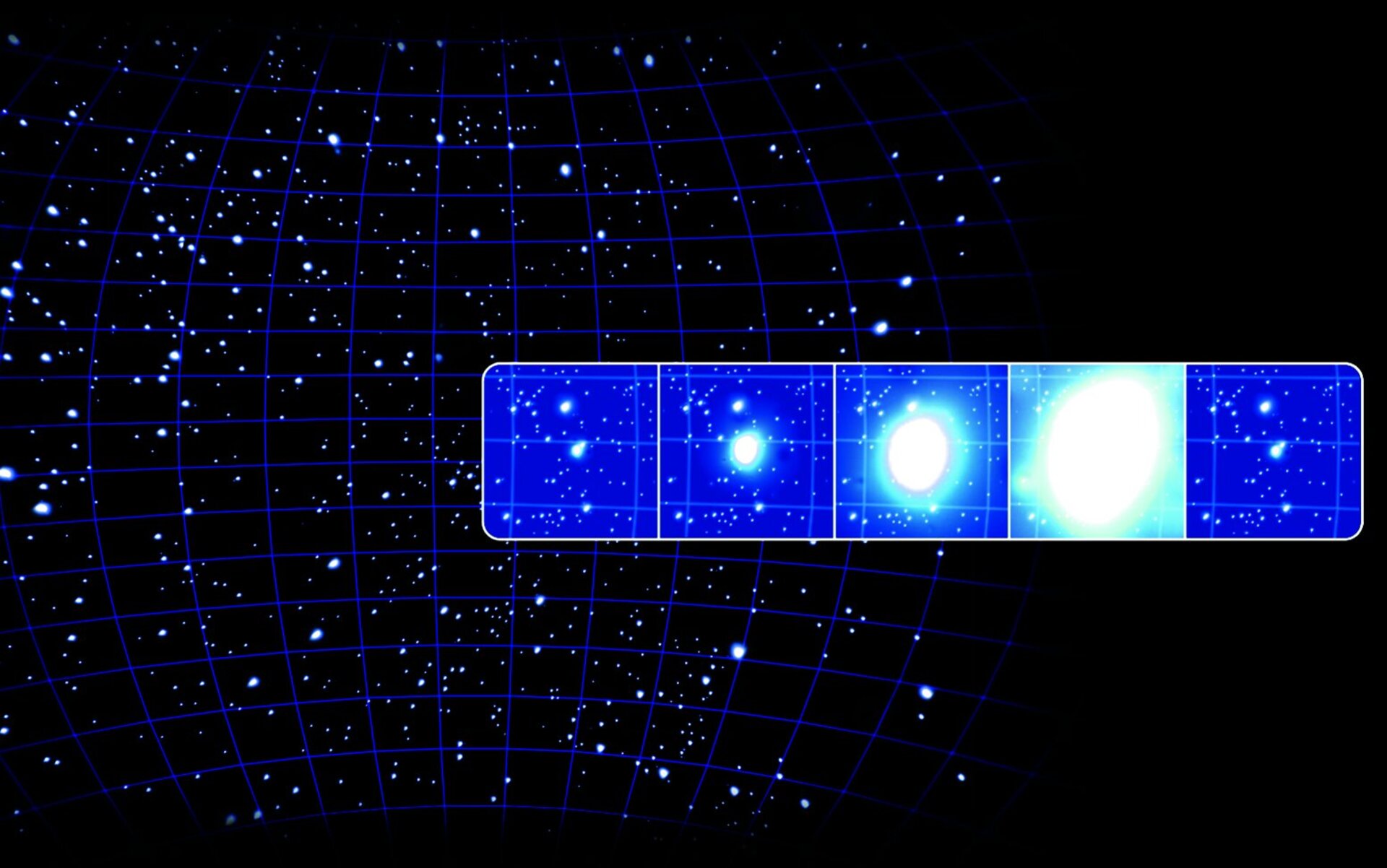 Integral has captured one of the brightest gamma-ray bursts ever seen. A meticulous analysis of the data has allowed astronomers to investigate the initial phases of this giant stellar explosion, which led to the ejection of matter at velocities close to the speed of light. In particular, the astronomers believe that the explosion lifted a piece of the central engine’s magnetic field into space.

On 19 December 2004, the blast from an exploding star arrived at Earth. ESA’s Integral satellite, an orbiting gamma-ray observatory, recorded the entire event, providing information for what may prove to be one of the most important gamma-ray bursts (GRBs) seen in recent years. As the data was collected, astronomers saw the 500-second-long burst rise to extraordinary brilliance.

“It is in the top 1% of the brightest GRBs we have seen,” says Diego Götz, CEA Saclay, France, who headed the investigation.

The brightness of the event, known as GRB 041219A, has allowed the team to perform a painstaking investigation to extract a property known as the polarisation of the gamma rays. The team have shown that the gamma rays were highly polarised and varied tremendously in level and orientation.

Polarisation refers to the preferred direction in which the radiation wave oscillates. Polaroid sunglasses work with visible light by letting through only a single direction of polarisation, blocking most of the light from entering our eyes.

The blast from a GRB is thought to be produced by a jet of fast-moving gas bursting from near the central engine; probably a black hole created by the collapse of the massive star. The polarisation is directly related to the structure of the magnetic field in the jet. So it is one of the best ways for astronomers to investigate how the central engine produces the jet. There are a number of ways this might happen.

Götz believes that the Integral results favour a synchrotron model and, of those three, the most likely scenario is the first, in which the jet lifts the central engine’s magnetic field into space. “It is the only simple way to do it,” he says.

What Götz would most like to do is measure the polarisation for every GRB, to see whether the same mechanism applies to all. Unfortunately, many GRBs are too faint for the current instrumentation to succeed. Even the state-of-the-art IBIS instrument on Integral can only record the polarisation state of gamma rays if a celestial source is as bright as GRB 041219A.

“So, for now we just have to wait for the next big one,” he says.

The team members are from: Commissariat à l'énergie atomique (Astrophysique Interactions Multi-´echelles, Astroparticules et Cosmologie), and the Institut d’Astrophysique de Paris (CNRS), all based in France.

Variable Polarisation in the prompt emission of GRB 041219A using IBIS on board Integral by Diego Götz et al. will be published in the Astrophysical Journal Letters.