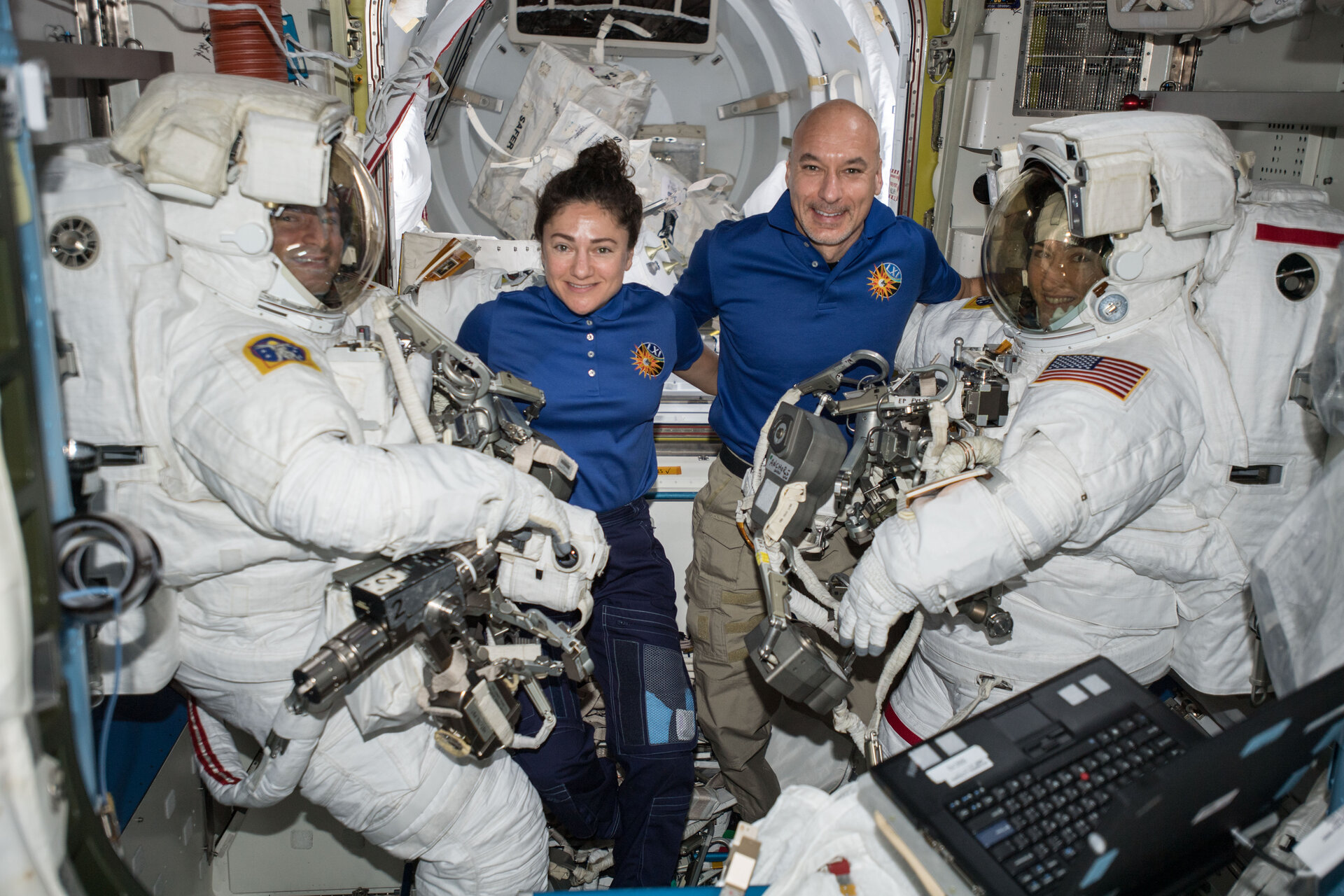 This article was updated 16 October 2019 following changes to the October spacewalk schedule.

European Space Agency (ESA) astronaut Luca Parmitano is expected to step out into space for his first spacewalk of the Beyond mission in November, but before then he will be support a number of spacewalks by NASA astronauts including the first all-female spacewalk by Christina Koch and Jessica Meir.

The series of spacewalks scheduled for October are part of an ongoing programme to upgrade the Station's power capacity by replacing nickel hydrogen batteries with newer lithium ion batteries. Luca was originally scheduled to participate as a spacewalker in these battery upgrades on 25 October, but will now support his crewmates from inside the Station – a role vital to spacewalk success.

The process of replacing the Space Station batteries is something Luca's fellow ESA astronaut Thomas Pesquet knows well. Thomas replaced batteries on another power channel during his Proxima mission. We asked him to tell us more about the task and how the crew prepare.

Known to the crew as an EVA (Extravehicular Activity), most spacewalks are planned up to a year in advance.

On Station, preparation begins around two weeks ahead, with a set of procedures called the “Road to EVA”.

“Preparing for a spacewalk will make up 2-3 hours of your schedule every day during this time,” Thomas explains. “The crew often carry out prep in their personal time as well.”

Live coverage of NASA spacewalks usually starts on NASA TV at 10:30 GMT (12:30 CEST), but the crew begin their preparation around 6:00. And there is to be no showering, shaving, or applying deodorant for at least a day in advance, as any remnants of these products could mix with the pure oxygen inside the suit and pose a fire risk

Astronauts wear a liquid cooling garment underneath their spacesuit. This is connected to the water system that keeps them cool, or warm, by circulating water around their body. They also don a medical monitor and put a dosimeter in their pocket to measure radiation before entering the hatch.

Thomas describes the process inside the airlock as “like scuba diving in reverse”, as astronauts breathe in a controlled way to rid their blood of nitrogen and adjust to lower pressure.

A third crew member, known as the Intravehicular (IV) crew member, is also isolated in the airlock, before it goes to vacuum. This person helps the astronauts with their oxygen masks and into their spacesuits, while making sure everything is checked, tethered and ready for a safe and successful sortie. This is the role Luca will play when his crewmates step outside.

Before exiting the airlock, Thomas says, extreme focus is the overriding feeling.

“Everybody’s watching, so many people have been involved in the preparation, and the risks are so much higher when you’re outside the Space Station,” he explains. “The only thing you can’t really prepare for are the day/night cycles.

“During the night, you only have your helmet light, so you can’t really see anything except what you’re working on. And because you’re working in all body orientations, it’s easy to get disoriented. But you know you can always follow your tether back towards the hatch.”

After exiting the airlock, Thomas says one astronaut prepares the worksite while the other breaks torque on the pre-positioned adapter plates. Each astronaut then works to install the adapter plates, needed to replace two older batteries with one new one.

Even more spacewalks are expected in November as Luca ventures out again with the complex task of repairing and enhancing dark matter hunter AMS-02 – a structure never designed to be maintained in orbit.

Learn more about preparing for a spacewalk in the latest episode of mission podcast ESA Explores featuring content from Luca himself and an interview with head of ESA's EVA and parabolic flight training unit Hervé Stevenin.