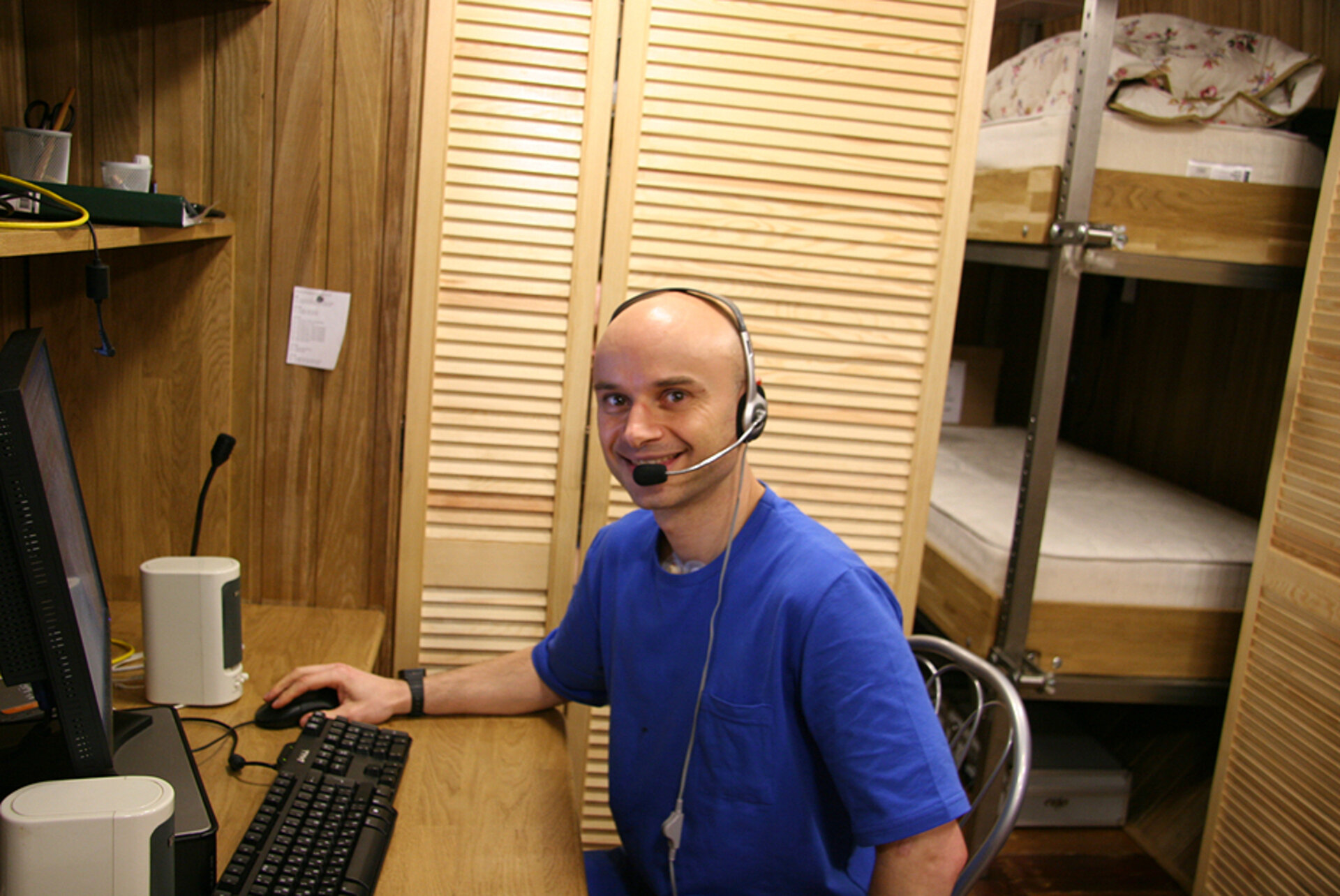 ESA-selected Mars500 crewmember Oliver Knickel describes some of the challenges currently facing the crew of six on their simulated Mars mission, including communication delays with mission control of up to 40 minutes.

Having entered the eleventh week of isolation, we have started the last of the three 35-day cycles of our experiment. Even though we are already more than familiar with the module's standard technical procedures, as well as the psychological and medical experiments we have to fulfil, the differing phases of our mission along with the varying conditions and the challenges of our isolation keeps us busy and makes our life inside the module varied and interesting.

While in the first weeks of isolation we simulated the stay on a space station in near Earth orbit, to prepare from there the take-off towards the Red Planet, we are now in the simulation of approaching Mars itself. This is just like it would be on a real Mars mission where a spaceship would not go immediately from Earth to Mars but would be prepared in a near Earth orbit and fly from there to its actual destination.

There are two major differences between being on a journey to Mars and being closer to Earth - these differences are related to the greater distance between the spacecraft and Earth. The first difference is the possibility to receive new supplies and the second one is the signal delay.

Because a station that circles around Earth like the International Space Station can be reached from Earth in less than two days, it is possible to send cargo ships if the crew should be urgently in need of something. On a mission to Mars, where the spacecraft can be more than two hundred days of flight away from Earth, this is no longer possible. For this reason we have now, other than in the first weeks of isolation, no possibility to receive goods from outside even if we should very much be in need of them.

The greater distance from Earth on a journey to Mars also leads to something that no astronaut has to worry about when staying close to Earth: the signal delay. A signal would, even with the speed of light, need up to 20 minutes in one direction to reach the receiver. But a communication with someone whose answer you can receive only after up to twice 20 minutes is of course senseless. So what we do in our simulation is what would be done on a flight to Mars - we record a video message with the help of a webcam and send it.

You have to pay attention to make sure the message is not too long so that the amount of data that has to be transferred stays rather small. For these messages it is important to say in just a few words precisely what you want. You have to be aware though that you will receive your answer only after up to 40 minutes.

It is by the way up to 40 minutes because the distance between Mars and Earth is not fixed but varies as both objects are in movement on elliptical orbits around the Sun. This is similar to a carousel with inner and outer seats which are moving at different velocities around the centre. If an inner seat just passes an outer one, they are rather close. But when the seats are at exactly opposite positions of the carousel, they are as far away from each other as possible. So the distance between Mars and Earth varies between 0.5 and 2.5 astronomical units (one astronomical unit is the distance between the Sun and Earth) which is from a little less than 60 to more than 250 million kilometres. This causes the signal delay to vary between durations of 3 and 20 minutes.

Of course this signal delay also makes daily life in a spacecraft to Mars even more difficult, since all urgent problems have to be solved by the crew without the possibility of receiving helping real time advice from a specialist on Earth.

One of the means to still support the crew medically in spite their limited means and the signal delay is telemedicine. For this you record medical data and send it to Earth where it is evaluated by specialists, like the teleechography, which Cyrille described in his sixth week report. Since this data usually does not have to reach Earth in real time, the signal delay does not cause any problems.

One of the experiments concerning telemedicine we fulfilled this week in the module was about a specially designed stethoscope from a French group of scientists who are part of the ESA's Mars500 scientific programme. This group designed a 'communicating stethoscope' which digitises the recorded data and sends it via Bluetooth to a computer and thereby allows a graphic representation and acoustic restitution of the signal.

From the computer the digitised data can also be transferred to specialists on Earth, which has been impossible so far with conventional stethoscopes. This is quite important since even though we have a doctor in our crew, he can of course not be a specialist for all medical fields and needs help from Earth for further far-reaching investigations of the stethoscope signal.

Each crewmember recorded a stethoscope signal from his heart and another one from his lungs and sent it towards Earth. There the scientists evaluated the condition of our organs with their special means and, if necessary, could provide us with advice and counter measures. Fortunately all of us had satisfying data which means that no crewmember has suffered from damage of these organs so far.

Besides all the science and the now more difficult conditions of isolation we still found time in between to relax and fill our spare time. This week we used the majority of our spare time for reading. We have taken lots of books into the module. We have books in four languages - Russian, English, German and French. Our library varies from recent bestsellers to thrillers and classical literature such as 'The Master and Margarita'. These books are not only good for having a quiet and relaxing time, they also offer a great chance to work on our vocabulary, especially if they are read in another language.

I guess this week’s reading record was at about 1500 pages spread over three different books which is quite a lot if you take into consideration that we are busy doing science most of the daytime.

So in spite of the limited means in the module, I am quite convinced that also in the four remaining weeks of our experiment there will not be a single second of boredom since time will be what we make of it.