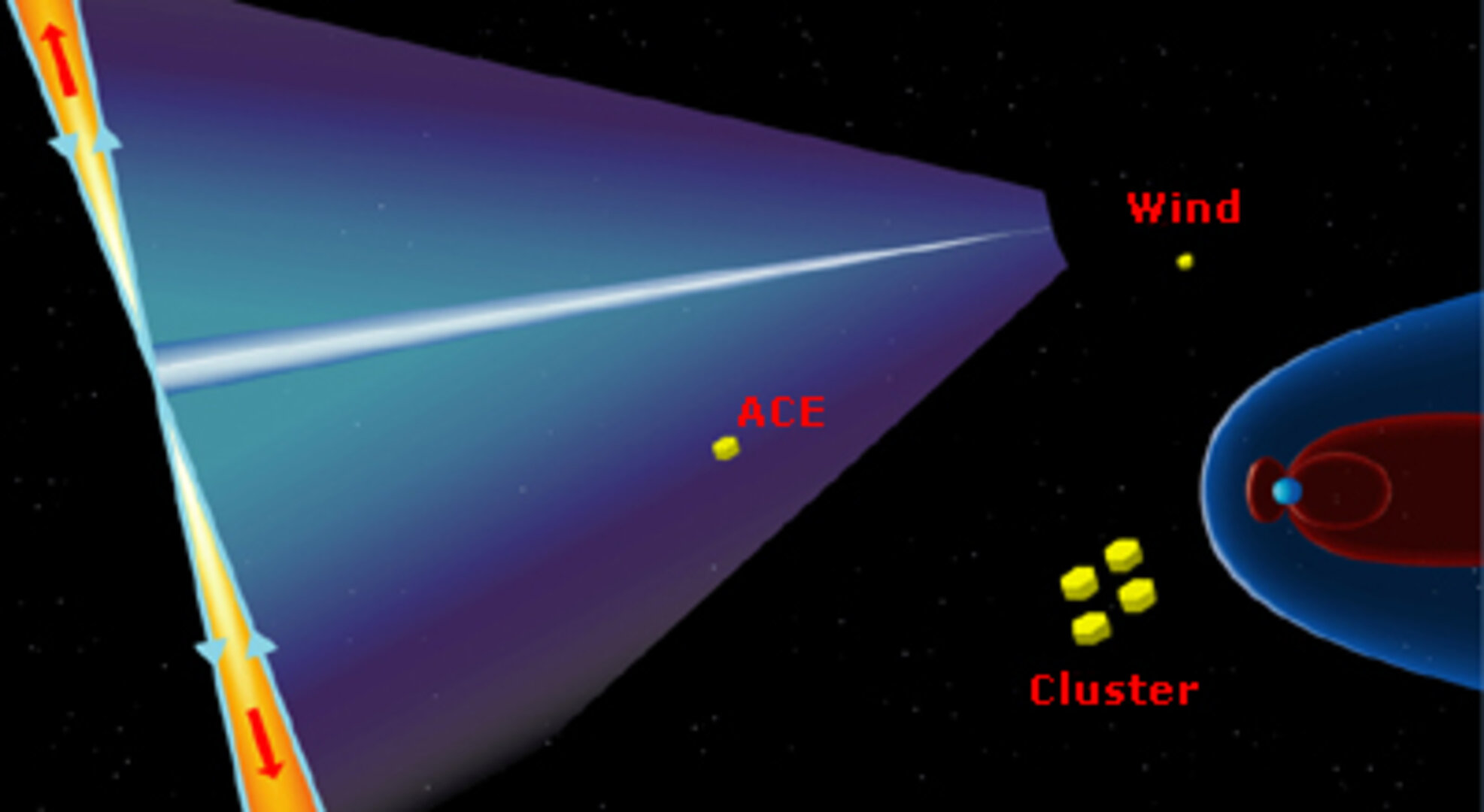 A flotilla of space-weather satellites – ESA’s Cluster and NASA’s ACE and Wind - observed for the first time steady large-scale jets of charged particles in the solar wind between the Sun and Earth.

When such huge jets of particles impact on Earth’s magnetic shield, they could cause powerful magnetic storms on our planet. Understanding the mechanism behind these phenomena - called ‘magnetic reconnection’ – is also fundamental to many explosive phenomena, such as solar flares, powerful gamma-ray bursts from ‘magnetars’ (dead stars noted for their extreme magnetic fields) and laboratory nuclear fusion.

Magnetic reconnection is a natural process by which the energy of magnetic field is converted into particle energy and by which, for instance, solar particles can penetrate through Earth’s magnetic shield, sometimes causing magnetic storms as well as beautiful ‘aurorae’, or polar lights.

Magnetic reconnection, responsible for transport of mass and energy across Earth’s magnetic defences, is a central issue in space physics.

Magnetic reconnection takes place when sheets of oppositely directed magnetic field get pressed together. In doing so, the sheets cross to form an X-shape that is then temporarily broken to form a new magnetic line geometry.

The creation of a different geometry induces jets of electrically charged particles and also allows solar material to pass through newly created ‘cracks’ in the previously impenetrable magnetic field configuration.

So far, magnetic reconnection events have been almost exclusively reported in Earth’s magnetosphere. This is the natural magnetic shield surrounding Earth. It is composed of magnetic field lines generated by our planet, and defends us from the continuous flow of charged particles that make up the solar wind by deflecting them away from Earth.

Previous reconnection events measured in Earth’s magnetosphere suggested that the phenomenon was intrinsically random and patchy in nature, extending not more than a few tens thousand kilometres.

However, a broader picture of magnetic reconnection emerged when six spacecraft – the four Cluster and the ACE and Wind satellites – were flying in the solar wind outside Earth’s magnetosphere, in sunward direction, on 2 February 2002.

During a time span of about two and a half hours, all spacecraft observed in sequence a single huge stream, or jet, of charged particles, up to 2.5 million kilometres (390 Earth radii) wide, caused by the largest reconnection event ever measured.

“If the observed reconnection were patchy, one or more spacecraft most likely would have not encountered an accelerated flow of particles,” says Tai Phan, from the University of California, Berkeley, USA, lead author of the results.

“Furthermore, patchy and random reconnection events would have resulted in different spacecraft detecting jets directed in different directions, which was not the case.”

Only with co-ordinated measurements by spacecraft like Cluster, ACE and Wind can we probe the near-Earth space environment with unprecedented detail and in 3D

The fact that the spacecraft detected the jet for more than two hours, also implies that the reconnection must have been almost steady over at least that timespan. Another 27 reconnection events of large magnitude – with the associated jets - were identified by ACE and Wind, four of which extended more than 100 Earth radii, or 650 000 kilometres.

Thanks to these additional data, scientists could conclude that reconnection in the solar wind is to be looked at as an extended and steady phenomenon.

Magnetic reconnection, responsible for transport of mass and energy across Earth’s magnetic defences, is a central issue in space physics. Consequences of this transport can be strong magnetic storms that have the potential to severely impair critical technology infrastructure.

Understanding magnetic reconnection is also fundamental when having to control magnetic fields and particles energy during nuclear experiments in laboratories. One of the keys to producing ‘clean’ nuclear energy (nuclear fusion) is making sure that reconnection phenomena do not take place, as they could cause powerful and dangerous jets of particles to be released uncontrolled.

“Only with co-ordinated measurements by spacecraft like Cluster, ACE and Wind can we probe the near-Earth space environment with unprecedented detail and in three dimensions,” continued Phan.

“This is the only natural laboratory were the physics of plasma and the magnetic phenomena that drive it can be studied in situ, paving the way to many applications,” he concluded.