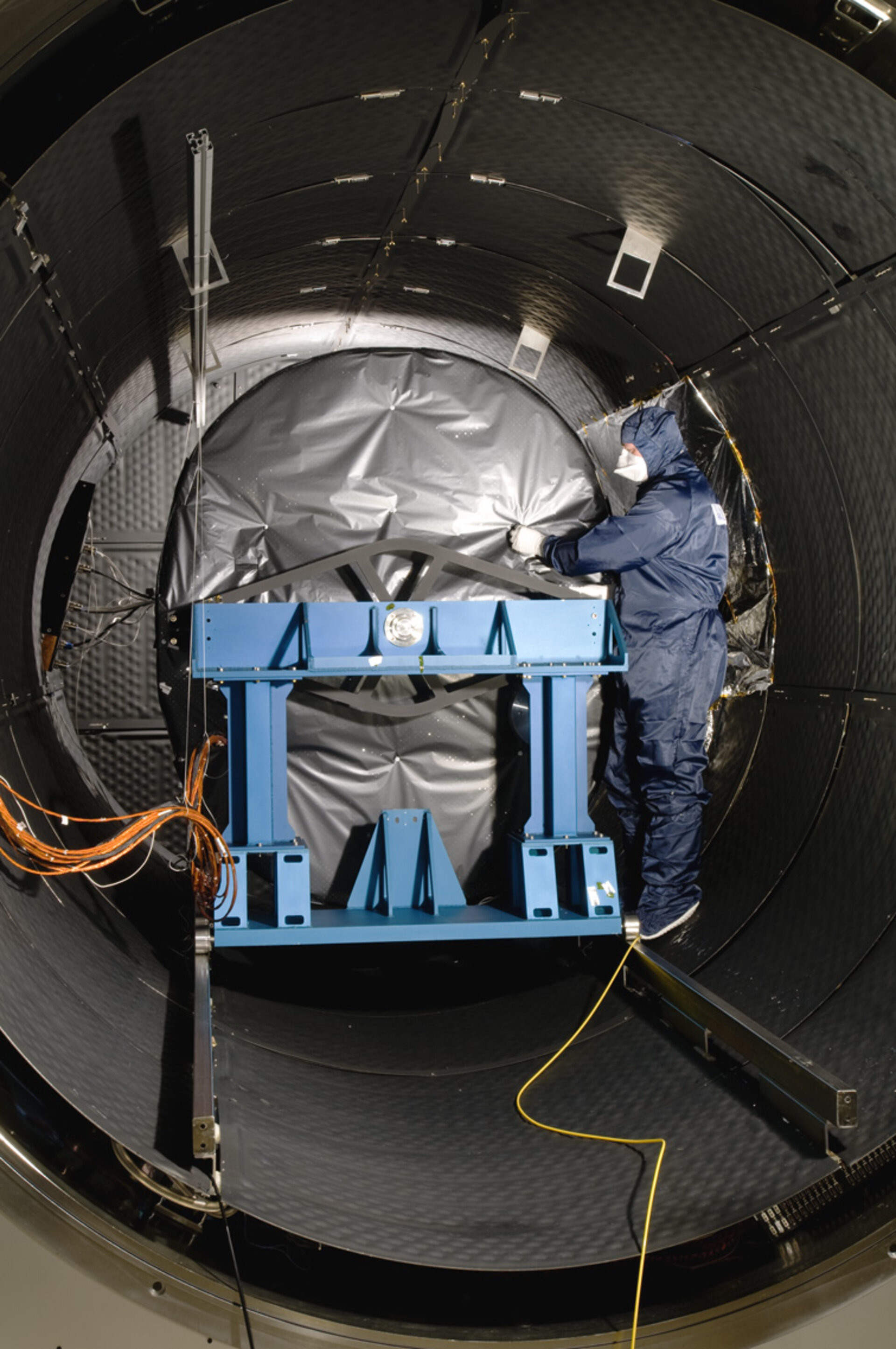 A pioneering instrument for the James Webb Space Telescope (JWST) has completed testing in the UK. MIRI is a key European contribution to the mission, which will be a space telescope with a mirror seven times bigger in area than that of the Hubble Space Telescope.

The Mid-InfraRed Instrument (MIRI) will be used by astronomers to study faint comets circling the Sun, newly born faraway planets, regions of obscured star formation, and galaxies near the edge of the Universe. It must work at extremely low temperatures, of just 7 K above absolute zero or -266° C.

A consortium of European institutes has built the main structure and optics of MIRI that focus and filter the infrared light collected by JWST’s 6.5 m-diameter mirror onto extremely sensitive detectors provided by NASA’s Jet Propulsion Laboratory. Much of that light will be thousands of millions of years old, having been emitted by objects in the distant Universe.

The testing, which took place at the UK Science and Technology Facilities Council’s RAL Space in Oxfordshire, subjected MIRI to the harsh conditions it will experience after it is launched into space on board the Webb telescope.

“It is inspiring to see MIRI working extremely well at its operating temperature after so many years in development. The test campaign has been a resounding success and the whole MIRI team can be very proud of this magnificent achievement,” says Gillian Wright, the European Principal Investigator and lead of the MIRI European Science Team.

The tests ensured that all parts of the instrument function together properly. Targets inside the test chamber were used to simulate scientific observations and obtain critical performance data. Astronomers will use these during the coming years to develop software needed to calibrate the instrument after launch.

Preliminary results show that MIRI is working extremely well, and confirm that it should be able to perform all the cutting-edge science it was designed to accomplish. Peter Jakobsen, ESA JWST Project Scientist, congratulates the members of the MIRI consortium for having passed this significant milestone. “Future users of JWST and MIRI are looking forward to learning more about the detailed performance of the instrument once the test results are analysed further in the coming months. The experience gained by the MIRI test team throughout this campaign has sown the seeds for a rich scientific harvest from the JWST mission," he says.

ESA has been collaborating with NASA and the Canadian Space Agency since 1996 on the design and construction of the Webb telescope. MIRI is the first of JWST’s four instruments to complete its calibration testing.

“The successful completion of this difficult test programme – involving more than 2000 individual tests – marks a major milestone for the JWST mission. MIRI will now be delivered to NASA’s Goddard Space Flight Center to join the integration and testing of the observatory’s science instrument payload, which began this year,” says Matthew Greenhouse, the Integrated Science Instrument Module Project Scientist for JWST at Goddard.

"The MIRI tests have demonstrated the excellent technical progress being made on the project and we're now looking forward to completing the equivalent tests on another of JWST's scientific instruments, the Near-Infrared Spectrograph (NIRSpec) being developed by ESA. These European eyes will play a crucial role in the success of this remarkable international mission to uncover mysteries across the Universe", says Mark McCaughrean, head of ESA's Research & Scientific Support Department.