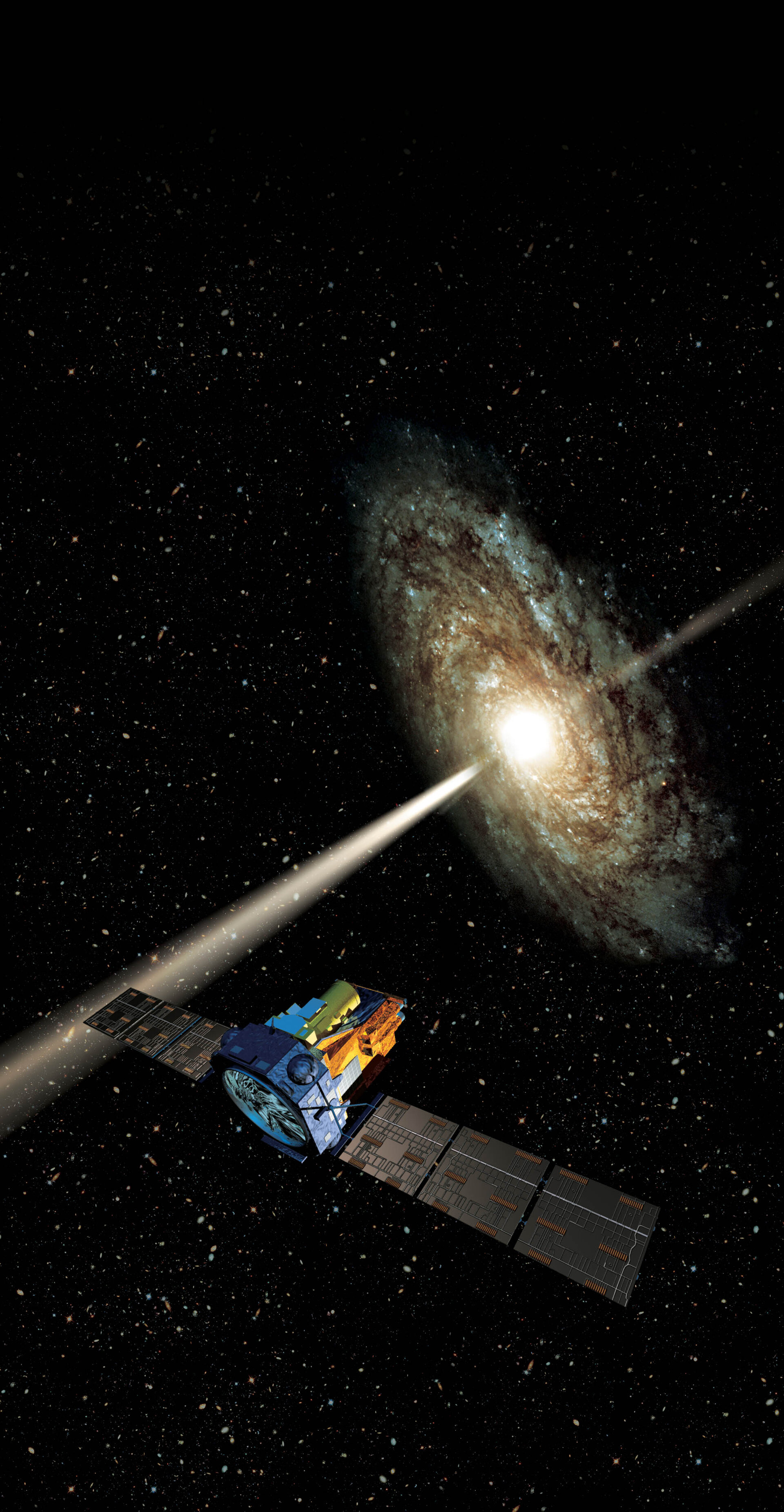 A gamma-ray burst detected by ESA's Integral gamma-ray observatory on 3 December 2003 has been thoroughly studied for months by an armada of space and ground-based observatories.

Astronomers have now concluded that this event, called GRB 031203, is the closest cosmic gamma-ray burst on record, but also the faintest. This also suggests that an entire population of sub-energetic gamma-ray bursts has so far gone unnoticed.

Cosmic gamma-ray bursts (GRBs) are flashes of gamma rays that can last from less than a second to a few minutes and occur at random positions in the sky. A large fraction of them is thought to result when a black hole is created from a dying star in a distant galaxy. Astronomers believe that a hot disc surrounding the black hole, made of gas and matter falling onto it, somehow emits an energetic beam parallel to the axis of rotation.

According to the simplest picture, all GRBs should emit similar amounts of gamma-ray energy. The fraction of it detected at Earth should then depend on the 'width' (opening angle) and orientation of the beam as well as on the distance. The energy received should be larger when the beam is narrow or points towards us and smaller when the beam is broad or points away from us. New data collected with ESA's high energy observatories, Integral and XMM-Newton, now show that this picture is not so clear-cut and that the amount of energy emitted by GRBs can vary significantly. "The idea that all GRBs spit out the same amount of gamma rays, or that they are 'standard candles' as we call them, is simply ruled out by the new data," said Dr Sergey Sazonov, from the Space Research Institute of the Russian Academy of Sciences, Moscow (Russia) and the Max-Planck Institute for Astrophysics, Garching near Munich (Germany).

Sazonov and an international team of researchers studied the GRB detected by Integral on 3 December 2003 and given the code-name of GRB 031203. Within a record 18 seconds of the burst, the Integral Burst Alert System had pinpointed the approximate position of GRB 031203 in the sky and sent the information to a network of observatories around the world. A few hours later one of them, ESA's XMM-Newton, determined a much more precise position for GRB 031203 and detected a rapidly fading X-ray source, which was subsequently seen by radio and optical telescopes on the ground.

This wealth of data allowed astronomers to determine that GRB 031203 went off in a galaxy less than 1300 million light years away, making it the closest GRB ever observed. Even so, the way in which GRB 031203 dimmed with time and the distribution of its energy were not different from those of distant GRBs. Then, scientists started to realise that the concept of the 'standard candle' may not hold. "Being so close should make GRB 031203 appear very bright, but the amount of gamma-rays measured by Integral is about one thousand times less than what we would normally expect from a GRB," Sazonov said.

A burst of gamma rays observed in 1998 in a closer galaxy appeared even fainter, about one hundred times less bright than GRB 031203. Astronomers, however, could not conclusively tell whether that was a genuine GRB because the bulk of its energy was emitted mostly as X-rays instead of gamma-rays. The work of Sazonov's team on GRB 031203 now suggests that intrinsically fainter GRBs can indeed exist.

A team of US astronomers, coordinated by Alicia Soderberg from the California Institute of Technology, Pasadena (USA), studied the 'afterglow' of GRB 031203 and gave further support to this conclusion. The afterglow, emitted when a GRB's blastwave shocks the diffuse medium around it, can last weeks or months and progressively fades away. Using NASA's Chandra X-ray Observatory, Soderberg and her team saw that the X-ray brightness of the afterglow was about one thousand times fainter than that of typical distant GRBs. The team's observations with the Very Large Array telescope of the National Radio Astronomy Observatory in Socorro (USA) also revealed a source dimmer than usual.

Sazonov and Soderberg explain that their teams looked carefully for signs that GRB 031203 could be tilted in such a way that most of its energy would escape Integral's detection. However, as Sazonov said, "the fact that most of the energy that we see is emitted in the gamma-ray domain, rather than in the X-rays, means that we are seeing the beam nearly on axis." It is, therefore, unlikely that much of its energy output can go unnoticed.

This discovery suggests the existence of a new population of GRBs much closer but also dimmer than the majority of those known so far, which are very energetic but distant. Objects of this type may also be very numerous and thus produce more frequent bursts.

The bulk of this population has so far escaped our attention because it lies at the limit of detection with past and present instruments. Integral, however, may be just sensitive enough to reveal a few more of them in the years to come. These could be just the tip of the iceberg and future gamma-ray observatories, such as the planned NASA's Swift mission, should be able to extend this search to a much larger volume of the Universe and find many more sub-energetic GRBs.

The results of this investigation are presented in two articles that have appeared in today's issue of the scientific journal Nature. One of them, by S. Sazonov, A. Lutovinov and R. Sunyaev, is entitled "An apparently normal gamma-ray burst with unusually low luminosity". The other, entitled "The sub-energetic GRB 031203 as a cosmic analogue to GRB 980425", is signed by A. Soderberg, S. Kulkarni, E. Berger, D. Fox, M. Sako, D. Frail, A. Gal-Yam, D. Moon, S. Cenko, S. Yost, M. Phillips, E. Persson, W. Freedman, P. Wyatt, R. Jayawardhana and D. Paulson.

The original announcement of the Integral detection of GRB 031203 was made by D. Goetz, S. Mereghetti, M. Beck, J. Borkowski and N. Mowlavi, via the Circular Service of the GRB Co-ordinates Network.

ESA's XMM-Newton can detect more X-ray sources than any previous satellite and is helping to solve many cosmic mysteries of the violent Universe, from black holes to the formation of galaxies. It was launched on 10 December 1999, using an Ariane-5 rocket, from French Guiana. It is expected to return data for a decade. XMM-Newton's high-tech design uses over 170 wafer-thin cylindrical mirrors spread over three telescopes.

More about the Very Large Array

The Very Large Array (VLA) is a research facility of the United States National Science Foundation. With 27 dish antennas, each 25 metres in diameter, working together as a single imaging instrument, it is the most versatile and most widely used radio telescope in the world.

For more information about the VLA please see: