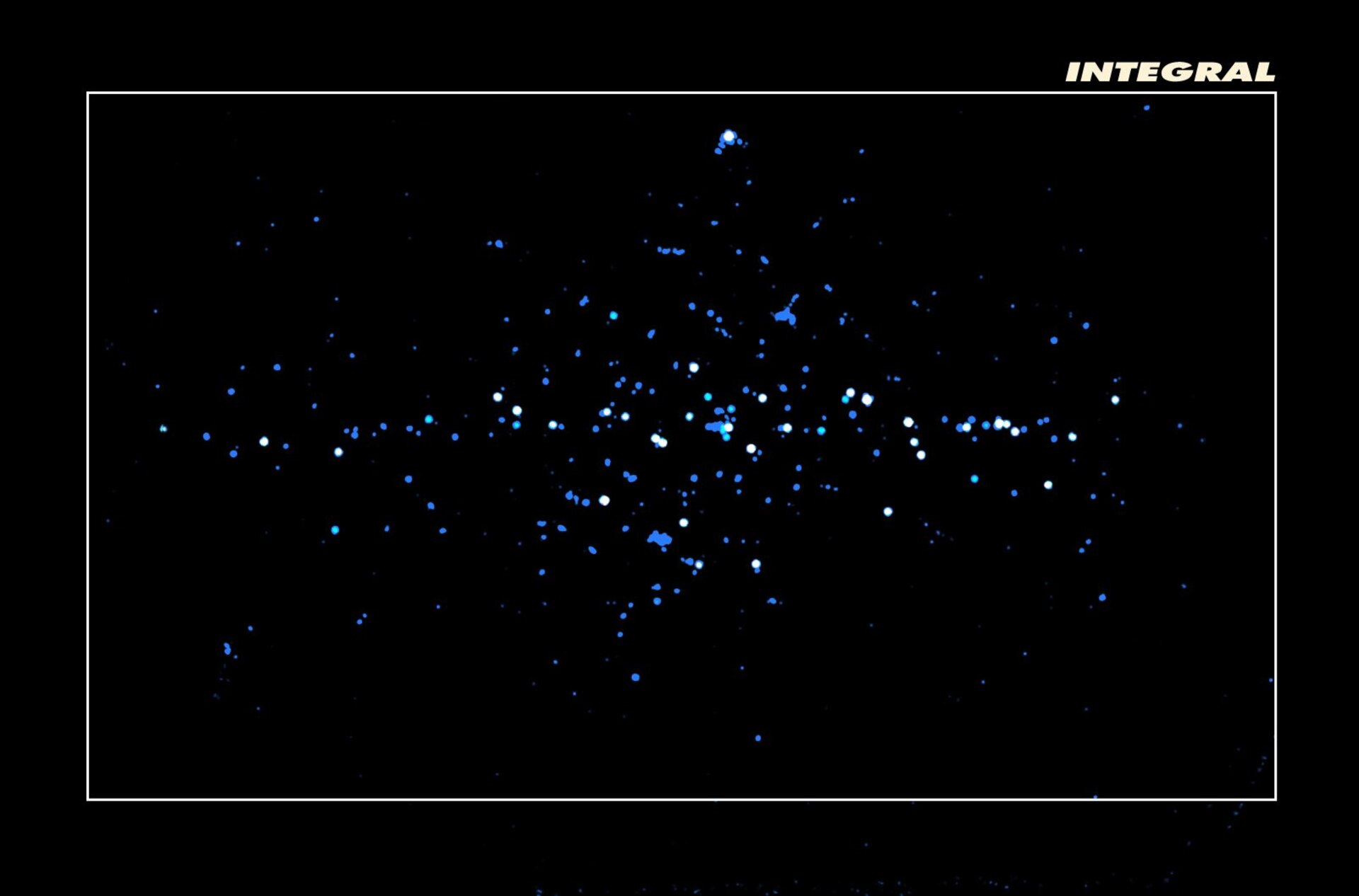 ESA's Integral gamma-ray observatory has resolved the diffuse glow of gamma rays in the centre of our Galaxy and has shown that most of it is produced by a hundred individual sources.

Integral's high sensitivity and pointing precision have allowed it to detect these celestial objects where all other telescopes, for more than thirty years, had seen nothing but a mysterious, blurry fog of gamma rays...

During the spring and autumn of 2003, Integral observed the central regions of our Galaxy, collecting some of the perpetual glow of diffuse low-energy gamma rays that bathe the entire Galaxy.

These gamma rays were first discovered in the mid-1970s by high-flying balloon-borne experiments. Astronomers refer to them as the 'soft' Galactic gamma-ray background, with energies similar to those used in medical X-ray equipment.

Initially, astronomers believed that the glow was caused by interactions involving the atoms of the gas that pervades the Galaxy. Whilst this theory could explain the diffuse nature of the emission, since the gas is ubiquitous, it failed to match the observed power of the gamma rays. The gamma rays produced by the proposed mechanisms would be much weaker than those observed. The mystery has remained unanswered for decades.

Now Integral's superb gamma-ray telescope IBIS, built for ESA by an international consortium led by Principal Investigator Pietro Ubertini (IAS/CNR, Rome, Italy), has seen clearly that, instead of a fog produced by the interstellar medium, most of the gamma-rays are coming from individual celestial objects. In the view of previous, less sensitive instruments, these objects appeared to merge together.

In a paper published today in Nature, Francois Lebrun (CEA Saclay, Gif sur Yvette, France) and his collaborators report the discovery of 91 gamma-ray sources towards the direction of the Galactic centre. Lebrun's team includes Ubertini and seventeen other European scientists with long-standing experience in high-energy astrophysics. Much to the team's surprise, almost half of these sources do not fall in any class of known gamma-ray objects. They probably represent a new population of gamma-ray emitters.

The first clues about a new class of gamma-ray objects came last October, when Integral discovered an intriguing gamma-ray source, known as IGRJ16318-4848. The data from Integral and ESA's other high-energy observatory XMM-Newton suggested that this object is a binary system, probably including a black hole or neutron star, embedded in a thick cocoon of cold gas and dust. When gas from the companion star is accelerated and swallowed by the black hole, energy is released at all wavelengths, mostly in the gamma rays.

However, Lebrun is cautious to draw premature conclusions about the sources detected in the Galactic centre. Other interpretations are also possible that do not involve black holes. For instance, these objects could be the remains of exploded stars that are being energised by rapidly rotating celestial 'powerhouses', known as pulsars.

Observations with another Integral instrument (SPI, the Spectrometer on Integral) could provide Lebrun and his team with more information on the nature of these sources. SPI measures the energy of incoming gamma rays with extraordinary accuracy and allows scientist to gain a better understanding of the physical mechanisms that generate them.

However, regardless of the precise nature of these gamma-ray sources, Integral's observations have convincingly shown that the energy output from these new objects accounts for almost ninety per cent of the soft gamma-ray background coming from the centre of the Galaxy. This result raises the tantalising possibility that objects of this type hide everywhere in the Galaxy, not just in its centre.

Again, Lebrun is cautious, saying, "It is tempting to think that we can simply extrapolate our results to the entire Galaxy. However, we have only looked towards its centre and that is a peculiar place compared to the rest."

Next on Integral's list of things to do is to extend this work to the rest of the Galaxy. Christoph Winkler, ESA's Integral Project Scientist, says, "We now have to work on the whole disc region of the Galaxy. This will be a tough and long job for Integral. But at the end, the reward will be an exhaustive inventory of the most energetic celestial objects in the Galaxy."

IBIS, Imager on Board the Integral Satellite, provides sharper gamma-ray images than any previous gamma-ray instrument. It can locate sources to a precision of 30 arcseconds, the equivalent of measuring the height of a person standing in a crowd, 1.3 kilometres away. The Principal Investigators that built the instrument are P. Ubertini (IAS/CNR, Rome, Italy), F. Lebrun (CEA Saclay, Gif sur Yvette, France), G. Di Cocco (ITESRE, Bologna, Italy). IBIS is equipped with the first uncooled semiconductor gamma-ray camera, called ISGRI, which is responsible for its outstanding sensitivity. ISGRI was developed and built for ESA by CEA Saclay, France.

SPI, Spectrometer on Integral, measures the energy of incoming gamma rays with extraordinary accuracy. It is more sensitive to faint radiation than any previous gamma ray instrument and allows the precise nature of gamma ray sources to be determined. The Principal Investigators that developed SPI are J.-P. Roques, (CESR, Toulouse, France) and V. Schoenfelder (MPE, Garching, Germany).

XMM-Newton can detect more X-ray sources than any previous observatory and is helping to solve many cosmic mysteries of the violent Universe, from black holes to the formation of galaxies. It was launched on 10 December 1999, using an Ariane-5 rocket from French Guiana. Its orbit takes it almost a third of the way to the Moon, so that astronomers can enjoy long, uninterrupted views of celestial objects.