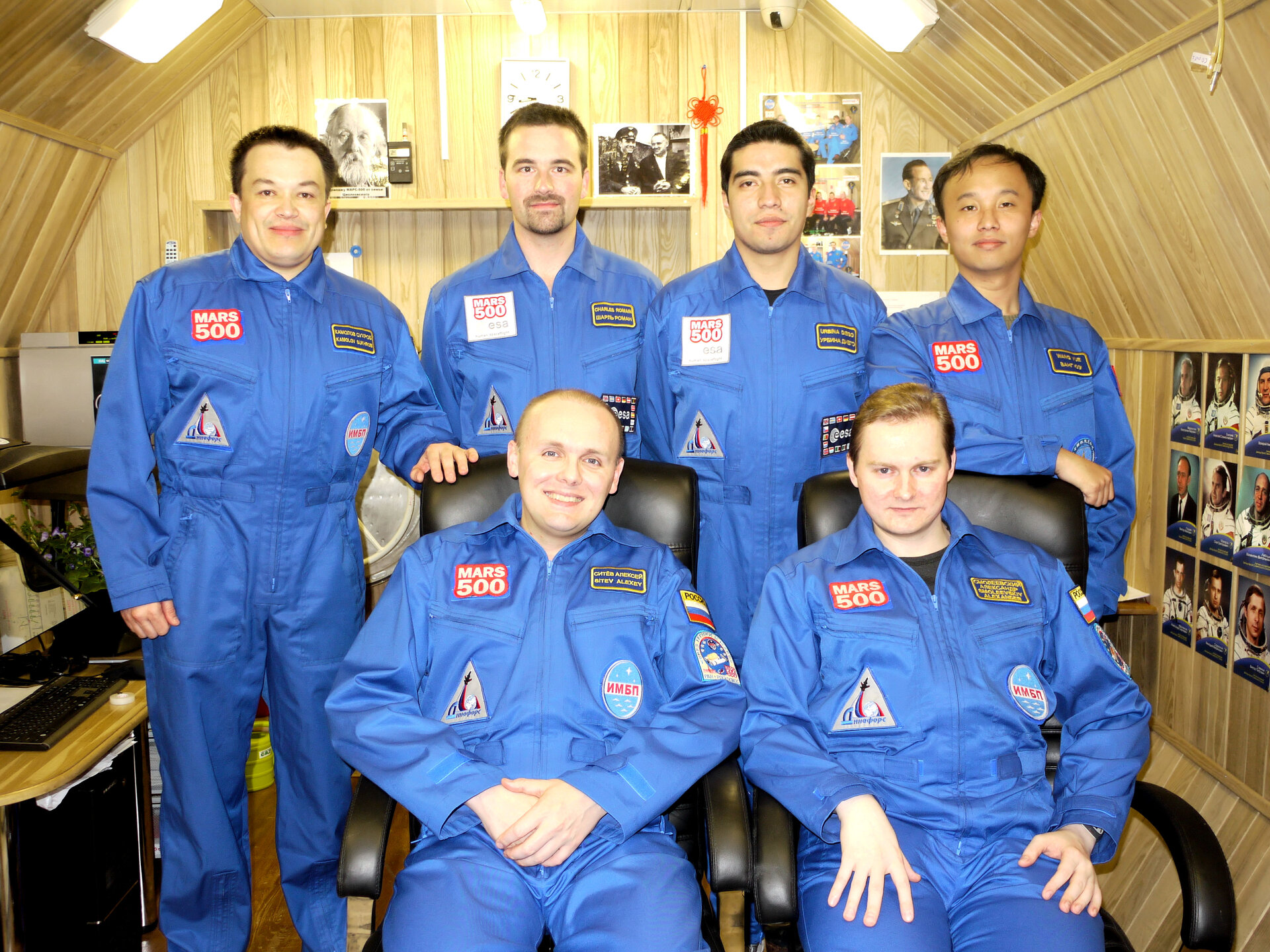 Sailing now in interplanetary space on their simulated mission towards the ‘Red Planet’, the Mars500 crew has entered in a new phase of their isolation. The previous mission endured 105 days in 2009 and from now on, everything in this experiment is new.

The six crewmembers of Mars500, safely locked in their facility in Moscow, have been cruising virtually towards Mars since 14 June, when their mission ‘departed’ from Earth’s orbit. The ‘launch’ occurred on 3 June when the hatch of their spacecraft-analogue facility was closed.

Since then, the crew has followed the timeline of the mission, reproducing as accurately as possible a potential mission to our planetary neighbour, complete with communication delays and daily routine similar to real space missions.

Right now the delay in communication – representing the distance of the craft from Earth – is two minutes in each direction, making direct communication impossible. As the simulation goes on, the delay will increase to 20 minutes.

Next major milestone will be a ‘landing’ on Mars, planned now for 10 February 2011. The entire ‘mission’ will last around 520 days, with the expected ‘splashdown’ back on Earth in early November 2011.

“It is difficult to think that in a year’s time we’ll still be here in the modules,” says Romain Charles, one of the ESA-selected crewmembers. “We just try to take every day as it comes and make the best out of that. This has worked fine for 105 days, and it will work for the more than 400 days left.”

With more than 100 scientific experiments to conduct, the Mars500 crew has no danger of having nothing to do. Crew time is packed with entertainment and personal projects, in addition to continuing maintenance and daily tasks in their ‘spacecraft’. They exercise for several hours a day to make up for their limited amount of natural physical activity.

“It has already been a long time, and at this phase of the mission the previous crew would have been excited, as they were looking forward to ending their isolation,” laughs Diego Urbina, the other European aboard. “We don’t have that luxury. We just have to keep our minds as steady as possible – for what will be a very long time.”

Both of the European ‘marsonauts’ are sending their best regards to Cyrille Fournier and Oliver Knickel, the ESA-selected members of the 105-day-long precursor mission.

“We could have continued easily our mission,” says Cyrille Fournier, one of the two European crew members in 105-day-study. “The motivation is the key issue. It is also important to do always something. I had too much to do in the facility - I didn’t have any time to wander around and watch time passing. Another important thing is daily routine. When you are following that, you can basically just go on, almost indefinitely.”

“Of course we had highs and lows during the mission,” continues Oliver Knickel, other European 105-day crewmember. “In the beginning we were very enthusiastic and then again in the end, when only few days were remaining.”

The most difficult moments during their isolation were in the middle, about six to eight weeks from the beginning. “You can go over these phases and have a successful mission only as a crew. So, my advice to the current team is simple: think what you can do for your crewmates,” states Oliver.

“During the mission, you’re colleagues and everybody is acting professionally, but afterwards you’re friends,” Cyrille concludes. “We’re all still very close now as friends. It was a great experience! I wish all the best for the new crew inside the ‘spacecraft’”

The latest diary update from the European crewmembers Diego Urbina and Romain Charles is published today on the ESA’s Mars500 web pages. ESA TV will air today a video about the mission with new material from the inside the facility.