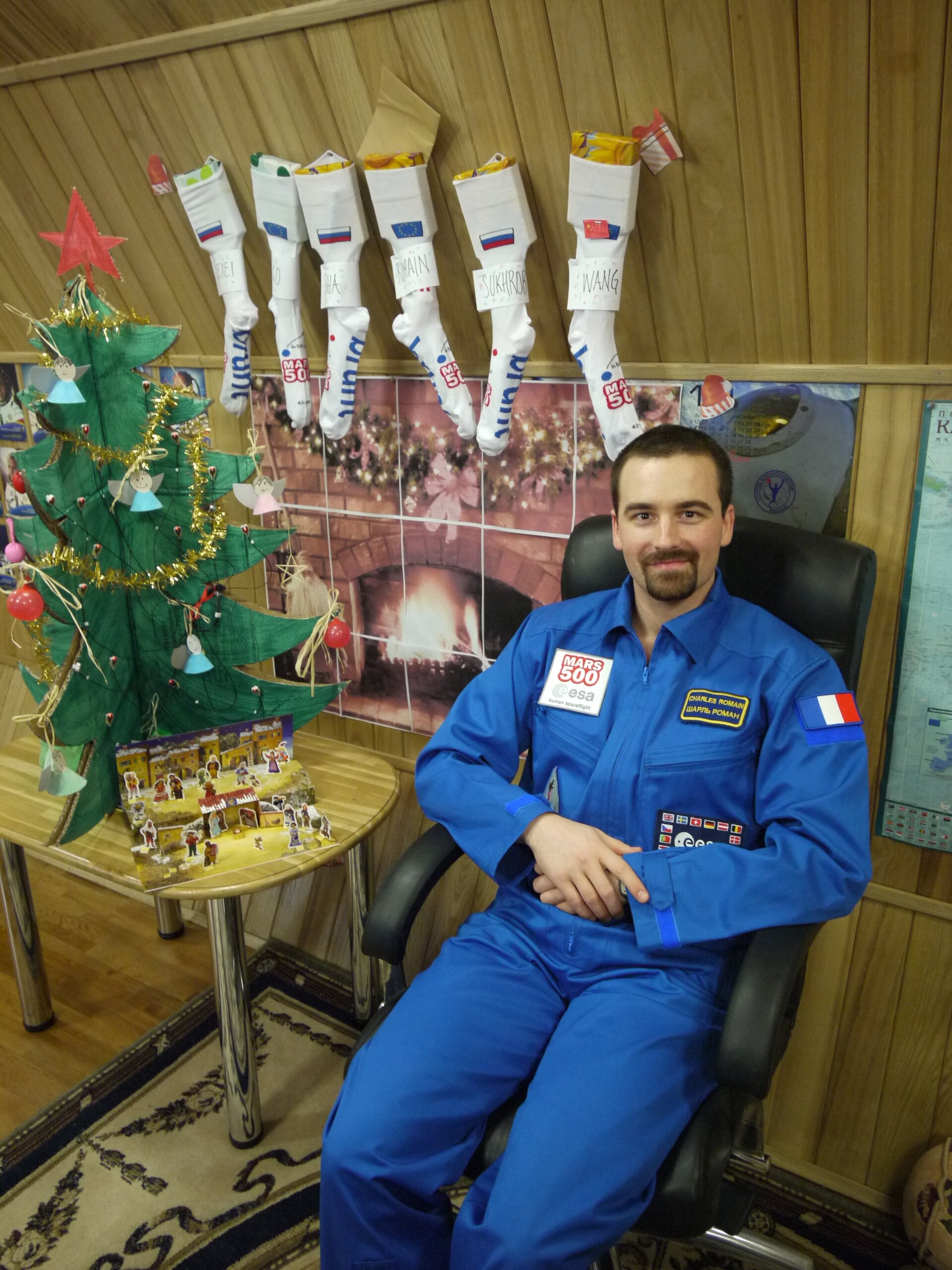 In the 10th Mars500 Mission Diary, Romain writes about end-of-year excitements in the crew’s spacecraft mockup on their virtual journey to Mars. With almost half the mission completed, the crew is now counting the days to their ‘arrival’ in orbit around the red planet, on 1 February.

During the last few weeks we experienced two major events inside our Mars500 modules. First, an off-nominal situation left us for 20 hours without water, electricity and ventilation during the first two days of December. The second event is merrier: Christmas! Let me share with you how we went through these both.

On 1 December I had a busy morning. With Sukhrob we are responsible for two experiments, which need to be performed in parallel and involve many devices. When we started to work with this experiment six months ago, we spent about three hours each time on the two subject persons, but over time we have developed some routines increasing our efficiency. Now we can finish it within one or one and a half hours.

One example of our time-saving tricks deals with the electrodes for Sukhrob’s experiment. Instead of bumping into each other while he sticks his electrodes to one of the subjects and I put in place a blood-pressure measurement device, we share half of the electrodes and each of us takes one side of the body of our subject. Everything went well for our both subjects, Diego and Wang Yue.

After that I went to my room where I began to study Russian. I was still in my room when, around at 13:00 hours, suddenly the power went down and everything stopped around us except the security lights and the computers with batteries.

The crew gathered in the kitchen to share information and define the best action plan. While the others were retrieving personal lights, Alexey and I checked all the power units of the modules. For each of them all the interrupters were OK. At that moment we received a message from ground control telling us that the main transformer of the building surrounding our modules was on fire.

We didn’t know how long it would take for the engineers’ team to solve the problem. So, to save some power on the emergency batteries and to avoid any new issues, we unplugged all the electric devices and we even removed the bulb of some security lamps which weren’t needed. In the end only two lights remained: one in the kitchen and one near the bathroom.

To understand our situation, you have to imagine an ‘end of the world’ scene. We were only 6 crewmembers lost in black modules with a thick silence around us. The friendly humming of the ventilation disappeared at the same time as the electricity. We couldn’t even get more than 2 litres from the tap because the pressure given by the pumps inside the water system had fallen too. Our reaction was to stick together close to the only place which still had a light: the kitchen.

As all our systems inside our facility were functioning nominally, all we could do was wait for additional information from the outside. Around 14:00, when we began to get hungry, we also realized that we didn’t have any microwave or kettle working, and so we decided to eat what was available: cereals, cakes and juice.

We received a new update on the repair of the transformer from the ground control around 16:00.

They told us that they could by-pass the system to restart one of our big fridges. It was a relief because the temperature of our four fridges was approaching 0°C. It would have been a disaster to lose half of our supplies! As soon as we got this information we went to the storage module to save our frozen food.

Three teams quickly formed to do three main tasks: to empty two small fridges near the greenhouse, to empty the non-functioning big fridge, and to store everything in the remaining big fridge. Making sure that everything fit inside the cold room was a challenge but we managed to do it.

Along with the working fridge all our low-voltage electricity became available in the storage module. So we settled inside the gym around 17:00. We stayed calm during the whole off-nominal situation, but still we received occasional audio messages from ground control asking us to be patient.

Before dinner time we brought the small table from the living room and we prepared some food. Bread, butter, cheese and cakes filled our stomach for this peculiar evening. One by one we left the gym to get some rest in our black and noiseless rooms. Only Alexey and Alexander were still awake when I went to bed after midnight.

The next morning I woke up at 06:00. The air around me was still and the temperature was higher than usual. I couldn’t hear anything in the modules, so I went back to sleep. At 07:45 I opened my eyes again and I saw a light appearing. I automatically stood up and went to check what was happening.

Alexey - who took the night shift –told me that the light was back, but not the 220V current, nor the ventilation and nor the water. However he added that the electricity was back in the medical module. I immediately went there with a full kettle to have some warm water. We could enjoy a good breakfast with hot tea and coffee: what a delight!

One hour later a familiar sound reached our ears: after 20h of silence the ventilation was on again! One by one all our systems came back to life: first ventilation, then electricity and finally water. We spent the rest of the day performing our scheduled tasks and also checking all our systems for any abnormal reaction to the power cut. At 16:00 on 2 December we received a video message from the ground control telling us that all the systems were nominal. This also when we learned that the event lasting 27 hours was a drill! Even if it took us some time to digest this last bit of information we enjoyed this unexpected event. It was a new situation breaking our monotonous days!

A couple of weeks later with Diego we began to organise our Christmas. In France, in Italy and in Colombia this celebration has a strong meaning and we generally spend the 24 and 25 December with our families. Being several millions kilometres away from Earth we had to find a way to let the spirit of Christmas enter our modules. Another difficulty was to explain it to the other crew members because Christmas day is just a normal day for them. Day after day they saw our excitement growing with curiosity.

Decoration is essential for a good Christmas party so we drew up a ‘to-do’ list to be sure that nothing was forgotten.

The first item was the trickiest because we didn’t bring any pine tree with us. After a brainstorming session we gathered enough ideas to build our Mars500 Christmas tree. I spent with Alexey one afternoon around some cardboard boxes, cutting and painting three branches that we assembled together. Once our Christmas tree was able to stand upright we worked on its decoration:

In the end Sukhrob was the one to understand what was missing. He disappeared for ten minutes and came back with a big star to put on top of our creation. The Christmas tree was complete! The first line of our ‘to-do’ list was completed.

Our next step was to decorate our walls and for this occasion Diego used his Photoshop skills to draw several images. Once they were finished and printed, we stuck them all around the place along with some green and red balloons. With that we finished a new line of our ‘to-do’ list.

For a good Christmas ambiance we needed a fireplace. This kind of device is quite difficult to find in a spaceship. However Diego had the solution to our problem. He found a picture of a fireplace and printed a big poster of it. Once it was stuck on the living room we could hang six socks above it: one for each crewmember.

Compared to all the trouble that we had to go through until now, the last item was almost too easy! I had with me a cardboard nativity scene and we only used a bit of glue to assemble it.

Our preparation was now over and we were proud to take some pictures near the fireplace.

On 25 December we opened our presents just before lunch. It was a real pleasure to discover all the gifts falling, little by little, from the socks: metallic bottles from Russia, small glasses from Colombia, cards from China and chocolates from France.

Sharing this Christmas day with my five international crewmates after more than 200 days in isolation will definitely be one of the important days of our trip to Mars.

I have one last thing to add: Happy New Year from the Mars500 crew!