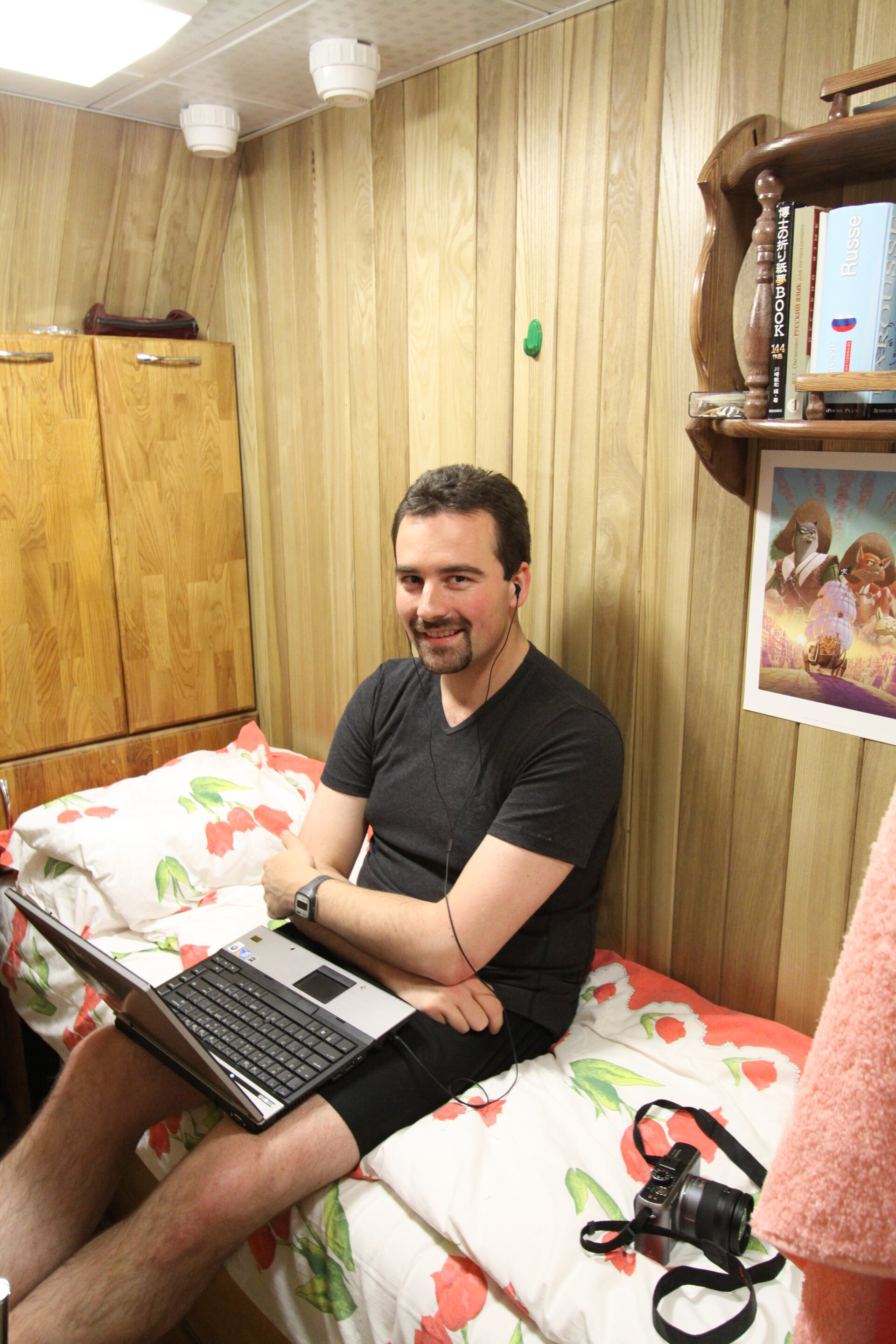 Romain writes in his second diary from the Mars500 facility about the morning routines, packed feeling on the central corridor and about his first birthday in isolation.

Our 'spaceship' is still near Earth getting some speed for the big jump. In one week we will be far enough to experience the first delays in communication with mission control. Until then we have settled into a nice and smooth routine, especially in the mornings. I will try to describe to you our typical first hour and an half of the day.

Imagine first our long and thin corridor. On one end of this corridor you have the toilets and on the other end you can find the kitchen. In between are the crew quarters. Now, if you are in the kitchen you can see the corridor on your left, the living room on your right and a connection node in front of you; beyond it is the gym.

Then, think that after waking up we have something like four or five tasks to do per person before breakfast. Some activities we all have to do (urine sampling, medical check-up), other tasks are individual such as putting some music on, preparing the breakfast etc.

And then, of course, we all wake up at slightly different times. Alexey (in room 1 near the kitchen) and Sukhrob (room 2) are always the first ones. Then, in a matter of minutes, Wang Yue (room 6), Alexander (room 3), Diego (room 5) and me (room 4) come out of our small cocoons.

After waking up, there is a rush hour in our narrow corridor. It is really a bottleneck for our morning duties – if you look at the photo you should have the right picture in your mind of how it feels in the mornings.

It is a wonder that just 30 minutes after our wake up, we are all together around the kitchen table having a healthy and cheerful breakfast with all our morning duties performed.

Now that the scene is complete: if I tell you that there are no bumping accidents in the corridor, you can understand why I call it a 'smooth routine'.

After the description of our morning ballet, I would like to share with you something more personal. One week ago, I had my first birthday in 'space', but the story that I want to tell you begins when I last came to France.

At that time, I knew that I was selected to be part of the final crew. I visited my parents in their little village for one evening and my sister used this occasion to organise a Facebook event. A quarter of the village showed up to greet me. It was unexpected and I was really happy to see everybody before the beginning of the mission. I received some presents for my firstt birthday in the modules, for Xmas and also for my next birthday in 2011.

Now here I am with a lot of gifts just under my bed and nothing to stop me from opening them at any time.

Three or four weeks before 12 July I felt eager to open them. In a way that is strange because I would have expected to feel that just a couple of days before my birthday However, I promised to unpack them at the right moment and so, none of them were touched before the due date.

This particular Monday, on top of the daily routine, we had to go to the medical module for blood sampling. I was on my way still feeling sleepy from the night but I stopped as soon as I entered the living room. I discovered the surprise that Diego made for me. He used a picture of a cosmonaut, changed his face to mine and the flag for the French one. He also made a poster out of it and asked all the guys to write kind words on it. He knew that since I was 9 or 10 years old I wanted to go to space and he made this dream come true in a way. This poster was really well done and Diego received a lot of rightful praise for it.

When we all gathered around the table for breakfast, I opened my presents. Diego began to sing ‘Happy Birthday’ and then we wondered what the Russian version was like. Strangely, they don't sing it and if they do it's a complete different song. The crew mood was excellent so Alexey, Alexander and Sukhrob sang for us!

After this Russian show, I spent the whole morning working and just before lunch a new surprise was about to happen. I received a phone call from mission control and they told me that somebody wanted to talk with me. I heard ‘Salut Romain, comment tu vas?’ I was taken aback; it took me some seconds to answer while a lot of questions were running through my head: What? Who speaks French? How? My only French friend living in Moscow had been invited to mission control just for me. This was my second big surprise on this beautiful day. I really enjoyed the time spent using again my native language.

For the dinner, we celebrated my birthday with frozen cake and powder wine. The food was not the most important thing; being able to enjoy it while chatting and laughing together was the real deal. First birthday in ‘space: exceptional.

Two days later we followed nearly the same plan but for Sukhrob's birthday. This time Diego drew a superb space ambulance and we all signed it. Now that he is our acknowledged artist, we will give him all our ideas for Wang Yue's birthday. I'll let him explain his creative background in the next note that we send you.