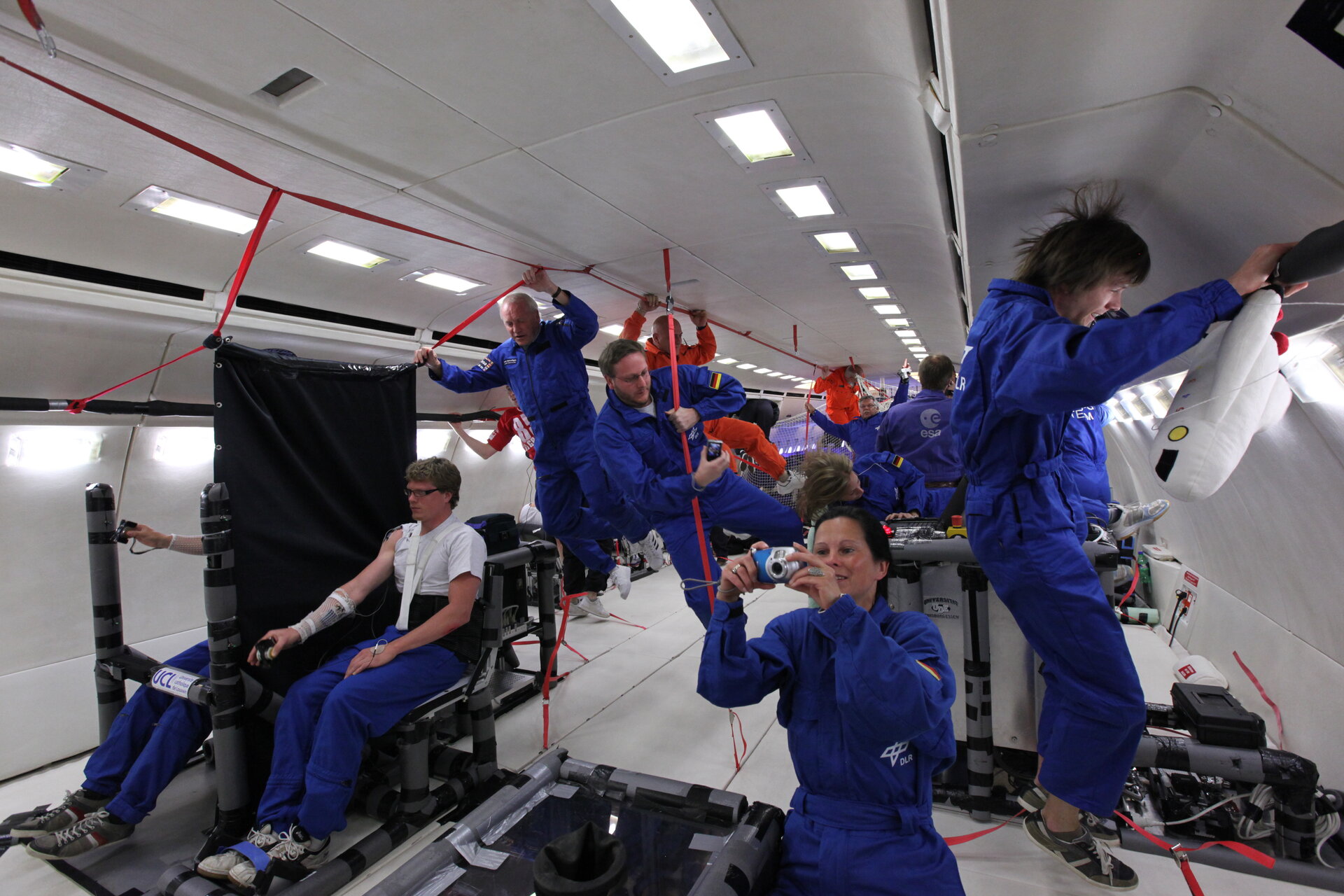 Each morning before departing for the flight, the campaign medical doctor Hervé Normand delivers an optional motion sickness medication. Injections of scopolamine turn out to be the more efficient way to fight motion sickness on parabolic flights.

“Martian and lunar gravity have been kind to our flyers so far, and only two participants got sick during the first flight,” says Hervé. The smooth trip allowed the passengers to perform their experiments in good shape. Today, most of them received a lower dose.

Having flown under lunar conditions and reaching the last round of Martian parabolas, the captain informed the crew and the experimenters that a technical problem was detected and, due to safety reasons, the plane had to go back to the Bordeaux-Mérignac airport.

A minor issue with one of the engine indicators was quickly solved on ground by the maintenance crew. After a light meal, the flyers boarded again for a second round of Martian and zero-g parabolas. Everybody wanted more.

“This is a really unique opportunity for researches and they won’t miss it. The outstanding scientific quality of these experiments will make the most of it,” points out Vladimir Pletser, manager for ESA’s parabolic flight campaigns.

Pletser highlighted the enormous response from the scientific community to this new way to conduct research in partial gravity. Have a look at some of the experiments taking place on board.

Watch out the ‘martian’ samples

When we land on Mars, we will need accurate samples of the soil to prove if life ever existed on the Red Planet. The ExoMars Rover is being developed to collect material from the subsurface, but before flying there ESA wants to test the technology under the most realistic Martian gravity conditions available on Earth.

The Sample Preparation and Distribution System (SPDS) is designed to prepare Martian soil sample for analysis in real time inside the rover. On board the plane and relying on after-flight measurements, ESA scientists want to characterize the behaviour of Mars-analogue powders in reduced gravity.

Various Martian-like samples are being processed during the flight and monitored by a video camera to control the dosing, cleanliness and maximum cross-contamination allowed. This is important to ensure the efficiency of the SPDS and the maximum scientific return of the ExoMars mission.

Read more about Sample Preparation and Distribution System on the ESA Science pages.

Changes in the vestibular system cause severe symptoms to some patients, such as vertigo and dizziness. Vestibular compensation is often considered as a fragile state that can be disrupted by non specific stimulations. Is this an all-or-nothing process or rather a gradual one dependant on the gravity levels?

Evaluating the relationship between the intensity of decompensation and the level of gravity during partial gravity parabolic flights gives a unique opportunity to understand the symptoms.

During each flight, four rats are being simultaneously studied: two of them are observed in free moving condition, the other two are restrained head-fixed rats. Scientists quantify their eye movements, neck muscle activity and motor behaviour. This research should yield results with important implications in understanding space motion sickness.

A videogame on board

Experiment: The Nintendo Wii as a training device for balance control under reduced gravity conditions

Human motor control is used to terrestrial conditions, but people are also capable of adapting their movement patterns to more than one gravity level. The Nintendo Wii console is testing how effective it could be as a motor and balance control training device on board the ISS or eventually in the preparation for a manned mission to Mars.

The performance test consists of different kinds of motor tasks with different levels of difficulty. The test subjects need to control the movement of their body centre of (??)mass and move it to maintain equilibrium for a certain amount of time.

Their performance is recorded under Martian, lunar and terrestrial gravity conditions, as well as under zero-g. To check the effectiveness of the training programme researches are comparing the performance of the group that trained with simulated reduced gravity before the campaign to another group trained under normal gravity conditions.

How is your rhythm in partial gravity?

The way your arm goes up and down varies under partial gravity conditions, and so does your rhythm. For the first time scientists are analysing the force applied at the fingertips –grip force- and the kinematic of the movement in Martian (0.16g) and lunar (0.38g) gravity levels.

They want to find out how changes of gravity might alter arm dynamics and how fast the brain reacts to it. Two flyers sit and hold a small device between the thumb and the index finger of the right hand. They perform free oscillations with a straight-arm shoulder rotation over and over again. The whole setup enables to record force and torque exerted by the fingers, muscle activity and position.

The team expect to enlarge the current knowledge on motor control and sensorimotor coordination. This knowledge will play a determinant role in practice for future design of prostheses, where the question of which sensory signal is necessary for successful control of movements is crucial.

The behaviour of cryogenic propellants in outer space is instrumental for future European space launchers with re-ignition capability. The aim of this experiment is to recreate different flight conditions applied to fluids during future coasting phases, such as pressurization and depressurization.

The intermediate gravity levels reached during this special flight campaign allows the study of different parameters. These tests are considered a first step towards further experimentation with sounding rockets and with instrumented cryogenic upper stages.

The team tries to validate numerical calculations useful to predict the behaviour of cryogenic propellants in reduced gravity conditions for the launchers of the future.