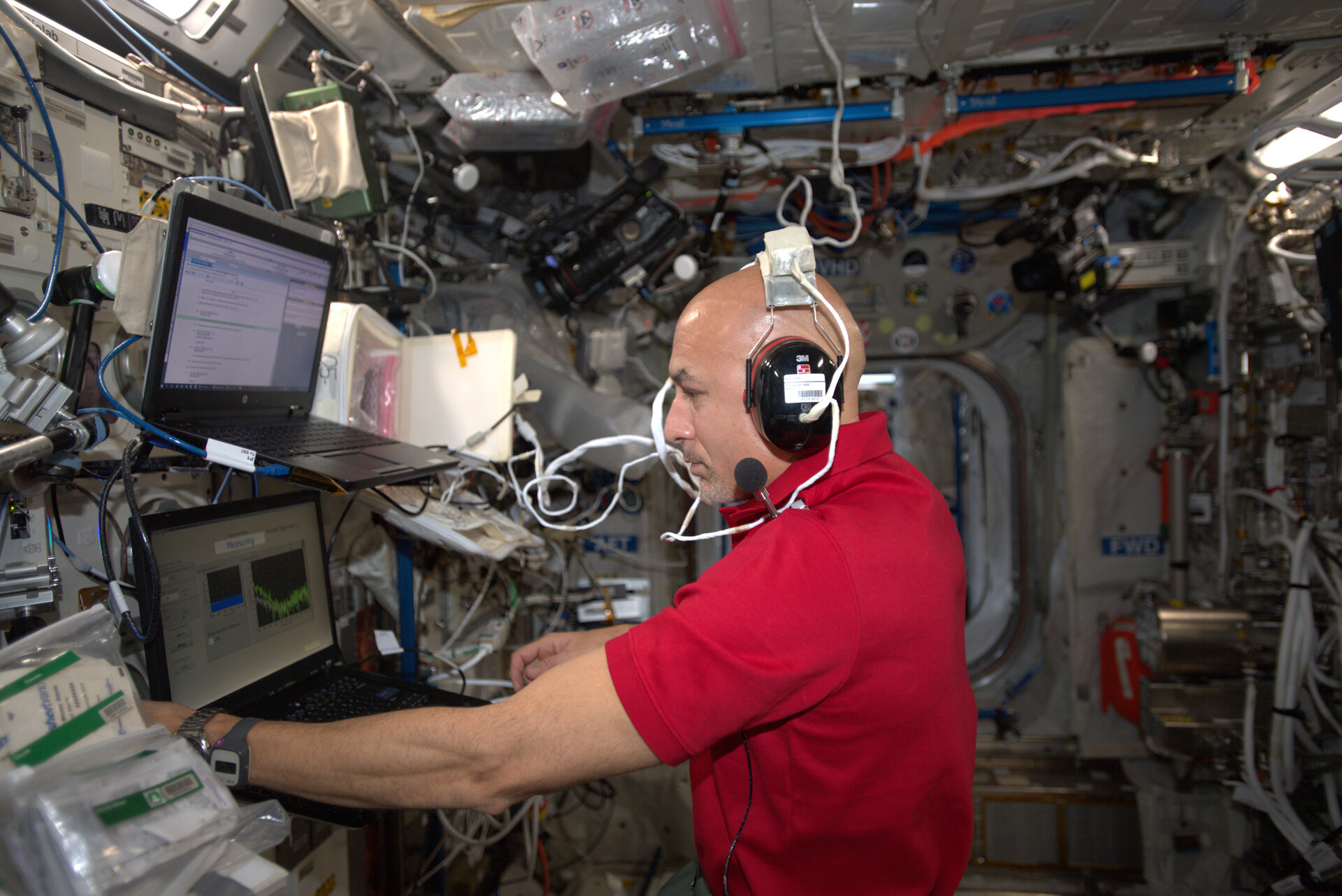 Spacewalk season continues on the International Space Station. ESA astronaut Luca Parmitano and NASA astronaut Andrew Morgan are getting ready to step outside the Quest airlock for their fourth and final time together on Saturday. But before they do, we look back at an action-packed fortnight of science and operations on the world’s only orbital outpost.

Acoustic Diagnostics is an Italian Space Agency (ASI) experiment, developed in cooperation with the University of Rome Tor Vergata, to study the effects of microgravity on the hearing of astronauts. Both Luca and Drew lent their ears to this experiment over the past six months and on 17 January Luca performed his fifth and final session of the experiment in space.

Those who have listened to episode four of the ESA Explores Beyond mission podcast will know, the International Space Station can be a noisy place. In order to understand the impact of this environment on astronauts’ hearing, Acoustic Diagnostics monitors what are known as optoacoustic emissions (OAEs).

OAEs are caused when hairs in the inner ear move in response to auditory stimulation. That means the measurement is passive. Astronauts put on headphones with a special inner-ear tip that simultaneously plays sound and measures their ears’ reactions.

Though his space sessions are complete, in his second week back on Earth Luca will perform the experiment again allowing researchers to compare data.

Luca also performed his sixth and final mandatory session of another familiar experiment – TIME. Pending sessions on the ground at the end of their missions, Luca and Drew are subjects five and six for this experiment that uses a virtual reality headset to better understand how astronauts perceive time in space.

TIME’s first two tasks require each astronaut to reproduce the perceived duration of an event. Tasks three and four require them to estimate the amount of time elapsed for a given event. Task five measures response time and task six requires the participants to judge the length of a minute.

Time perception is fundamental to motion perception, sound localisation, speech, and fine motor coordination. The results of ground-based studies have shown that distance perception and time perception are intimately linked and it is thought that microgravity could be responsible for an underestimation of the time between events. It is also thought that this misperception of time carries over to the early post-flight period. Luca is scheduled to perform more sessions once he is back on the ground to help researchers’ understanding.

In the constantly recycled atmosphere of the International Space Station, buildup of bacteria poses a challenge to astronaut health – in fact, bacteria and viruses are often more virulent in microgravity than on earth. Mitigating this will be vital during missions to the Moon and Mars.

MATISS is an experiment from the French space agency CNES investigating the antibacterial properties of materials in space to determine whether future spacecraft could be easier to clean and better for astronaut hygiene.

Last September, Drew Morgan installed two MATISS-2.5 sample holders in Europe’s Columbus laboratory. These sample holders are a continuation of the experiment and contain new patterned hydrophobic materials that will remain exposed in the lab for a further two months. Hydrophobic materials are non-polar, meaning they repel water and could present a self-cleaning solution.

In addition to these experiments, crewmembers have been studying the physics of flame spread as part of an experiment called Confined Combustion, completed surveys to help researchers better understand the effect of “menu fatigue” caused by the limited food options available in space and even communicated with a community centre in Japan via ham radio.

Autonomous experiments on everything from cyber security to an interactive artistic kaleidoscope have been running in Europe’s first commercial research facility ICE Cubes and – despite Luca returning to Earth – the European science will continue in earnest.

In fact, you can get an even closer look at life on board the International Space Station this Saturday on ESA Web TV ahead of the next #SpacewalkForAMS as we premiere an hour-long tour filmed by Luca and Drew themselves. Stay tuned.