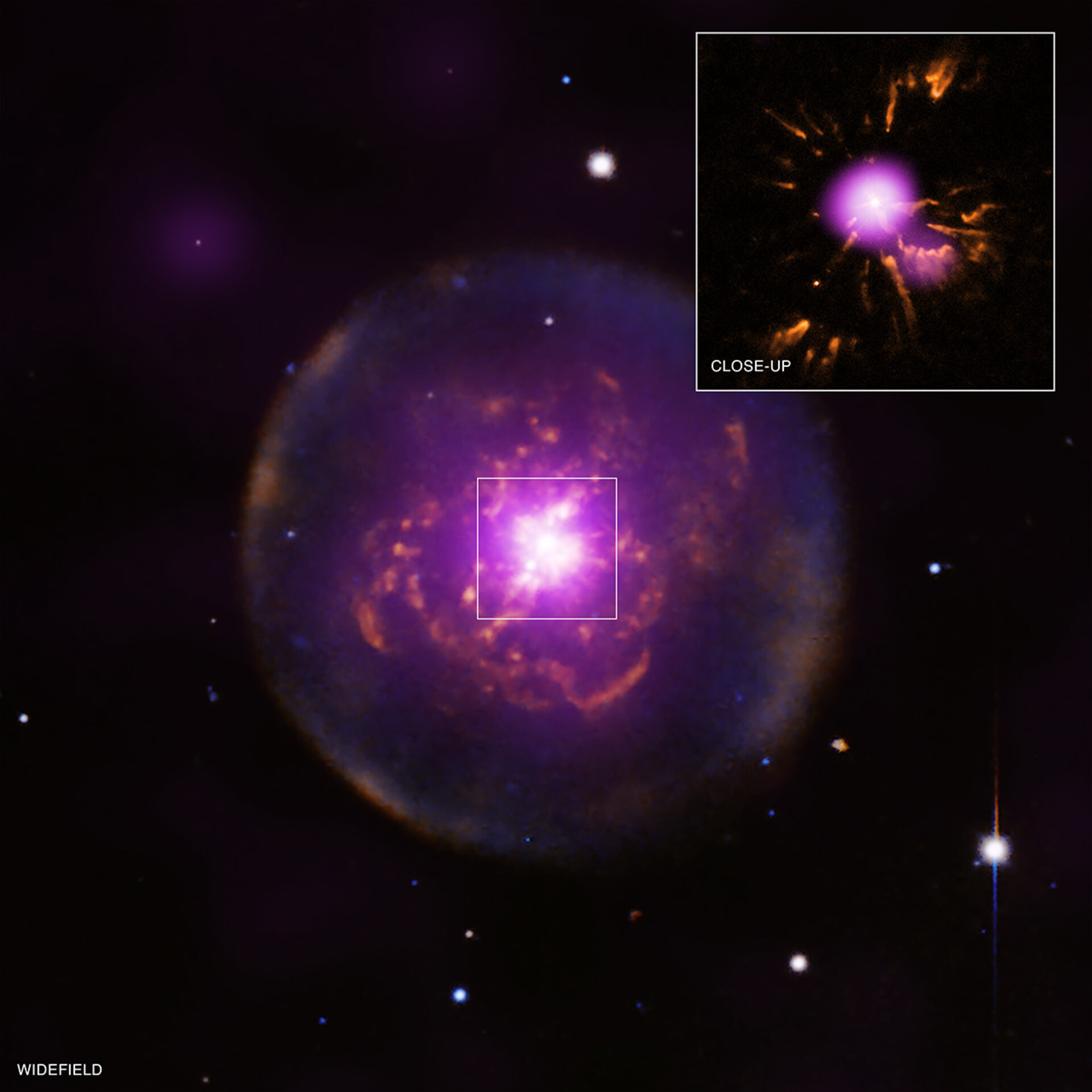 Astronomers have found evidence for a dying Sun-like star coming briefly back to life after casting its gassy shells out into space, mimicking the possible fate our own Solar System faces in a few billion years.

This new picture of the planetary nebula Abell 30, located 5500 light-years from Earth, is a composite of visible images from the NASA/ESA Hubble Space Telescope and X-ray data from ESA’s XMM-Newton and NASA’s Chandra space telescopes.

‘Planetary nebula’ is the name given to the often-concentric shells of stellar material cast into space by dying stars. To astronomers of the 18th century, these objects looked like the colourful ‘blob’ of a planet through their telescopes, and the name stuck.

Astronomers now know that as a star with less than eight times the mass of the Sun swells into a red giant towards the end of its life, its outer layers are expelled via pulsations and winds.

Ultraviolet radiation shining out from the stripped-down hot stellar core then lights up the ejected shells, resulting in intricate artworks that can be seen by modern telescopes.

The star at the heart of Abell 30 experienced its first brush with death
12 500 years ago – as seen from Earth – when its outer shell was stripped off by a slow and dense stellar wind.

Optical telescopes see the remnant of this evolutionary stage as a large, near-spherical shell of glowing material expanding out into space.

Then, about 850 years ago, the star suddenly came back to life, coughing out knots of helium and carbon-rich material in a violent event.

This had the knock-on effect of accelerating the wind from the star to its present speed of 4000 kilometres per second – over 14 million kilometres per hour.

As this fast stellar wind catches up and interacts with the slower wind and clumps of previously ejected material, complex structures are formed, including the delicate comet-like tails seen near the central star in this image.

The stellar wind bombarding dense clumps of material provides a chilling look at the possible fate of Earth and its fellow planets in our own Solar System in a few billion years’ time.

When our Sun emits its final gasps of life at the heart of a planetary nebula, its strong stellar wind and harsh radiation will blast and evaporate any planets that may have survived the red giant phase of stellar evolution.

If any distant civilisation is watching with high-power telescopes at the time, they might see the glowing embers of the planets light up in X-rays as they are engulfed in the stellar wind.