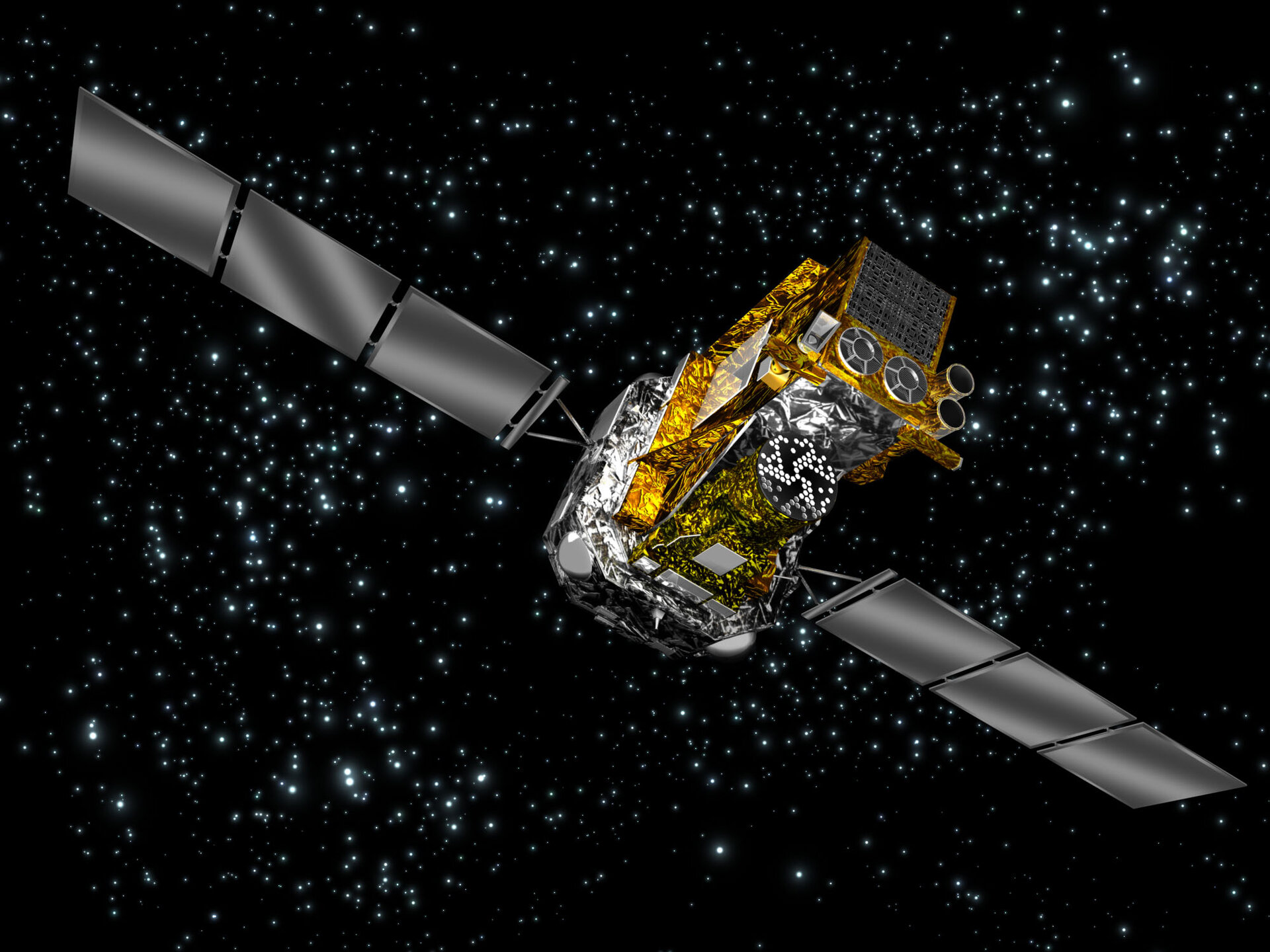 The shape of the mysterious cloud of antimatter in the central regions of the Milky Way has been revealed by ESA’s orbiting gamma-ray observatory Integral. The unexpectedly lopsided shape is a new clue to the origin of the antimatter.

The observations have significantly decreased the chances that the antimatter is coming from the annihilation or decay of astronomical dark matter.

Georg Weidenspointner at the Max Planck Institute for Extraterrestrial Physics and an international team of astronomers made the discovery using four-years-worth of data from Integral. The cloud shows up because of the gamma rays it emits when individual particles of antimatter, in this case positrons, encounter electrons, their normal matter counterpart, and annihilate one another.

One signature of positron-electron annihilation is gamma rays carrying 511 thousand electron-volts (keV) of energy. There has been a vigorous debate about the origin of these positrons ever since the discovery of the 511 keV emission from the centre of the galaxy by gamma-ray detectors flown on balloons during the 1970s.

Some astronomers have suggested that exploding stars could produce the positrons. This is because radioactive nuclear elements are formed in the giant outbursts of energy, and some of these decay by releasing positrons. However, it is unclear whether these positrons can escape from the stellar debris in sufficient quantity to explain the size of the observed cloud.

Other astronomers wondered whether more exotic processes were at work. From earlier results using much less data, the positron cloud seemed to be spherical and centred on the centre of the galaxy. Such a shape and position corresponds to the expected distribution of dark matter in the centre of our galaxy, so it was suggested that dark matter was annihilating or decaying into pairs of electrons and positrons, which then annihilated to produce the gamma rays.

The trouble with this idea, however, was that the dark matter particles needed to be much less massive than most theories were predicting.

The new results give astronomers a valuable new clue and point away from dark matter as the origin of the antimatter. Beyond the galactic centre, the cloud is not entirely spherical. Instead it is lopsided with twice as much on one side of the galactic centre as the other. Such a distribution is highly unusual because gas in the inner region of the galaxy is relatively evenly distributed.

Equally importantly, Integral found evidence that a population of binary stars is also significantly off-centre, corresponding in extent to the cloud of antimatter. That powerfully suggests these objects, known as hard (because they emit at high energies) low mass X-ray binaries, are responsible for a major amount of antimatter.

A low mass X-ray binary (LMXB) is a celestial system in which a relatively normal star is being eaten alive by a nearby stellar corpse, either a neutron star or a black hole. The gravitational field of the stellar corpse is so strong that it rips gas from the normal star. As this gas spirals down towards that object, it is heated so much that positron-electron pairs can be spontaneously generated in the intense radiation field, although the 511 keV emission is probably too weak to be detected from individual LMXBs by Integral.

“Simple estimates suggest that about half and possibly all of the antimatter is coming from the X-ray binaries,” says Weidenspointner. The other half could be coming from a similar process around the galaxy’s central black hole and the various exploding stars there. He points out that the lopsided distribution of hard LMXBs is unexpected, as stars are distributed more or less evenly around the galaxy. More investigations are needed to determine whether the observed distribution is real.

Integral is currently the only mission that can see both the 511 keV radiation and the hard LMXBs. Weidenspointner and colleagues will be watching keenly to see whether it discovers more LMXBs and, if so, where they are located.

“The link between LMXBs and the antimatter is not yet proven but it is a consistent story,” says Weidenspointner. It has real astrophysical importance because it decreases the need for dark matter at the centre of our galaxy.

‘An asymmetric distribution of positrons in the galactic disk revealed by gamma rays’ by Georg Weidenspointner et al. is being published on 10 January, in the journal Nature.