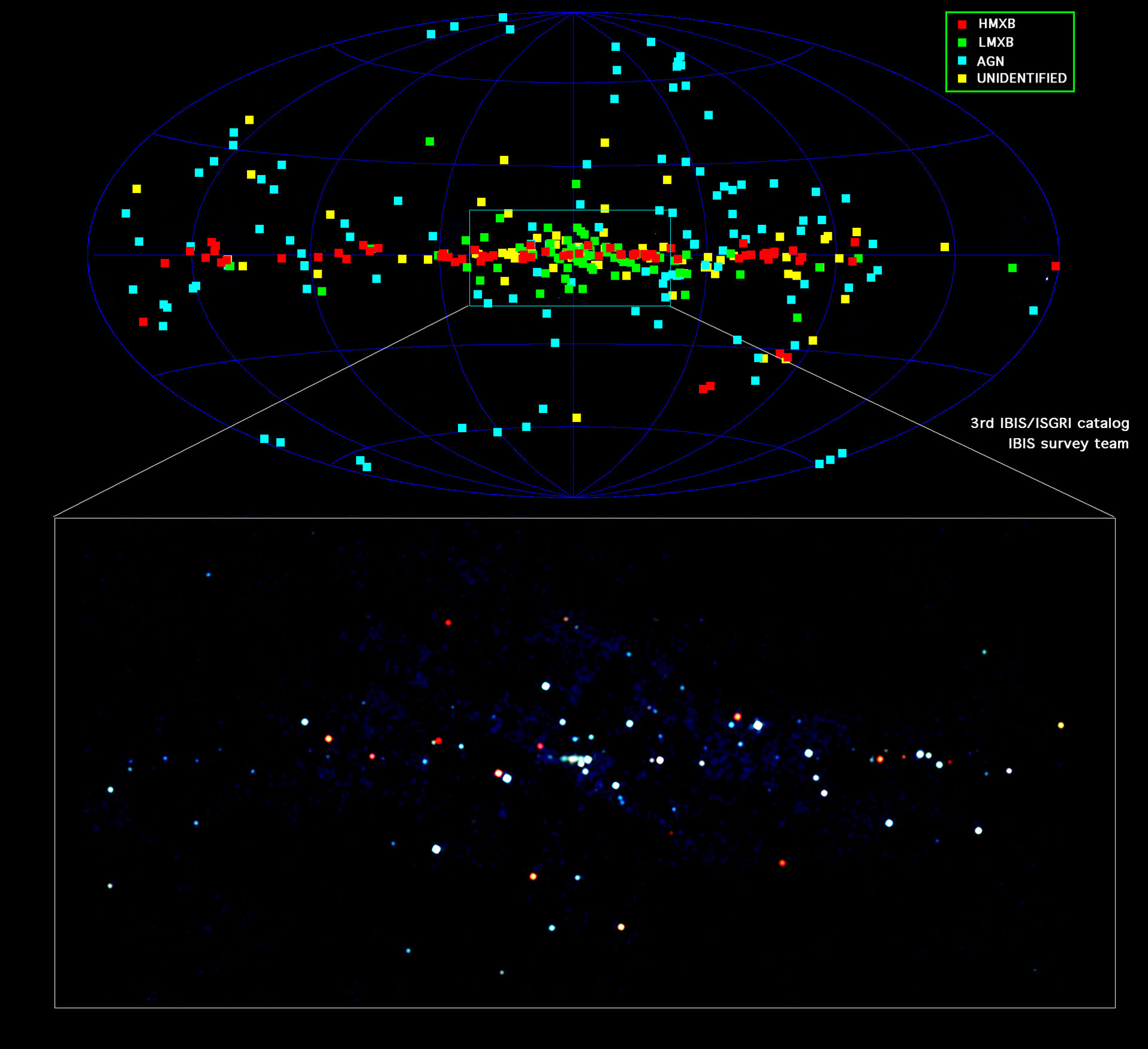 With eyes that peer into the most energetic phenomena in the universe, ESA’s Integral has been setting records, discovering the unexpected and helping understanding the unknown over its first five years.

Integral was launched on 17 October 2002. Since then, the satellite has helped scientists make great strides in understanding the gamma-ray universe - from the atoms that make up all matter, giant black holes, mysterious gamma-ray bursts to the densest objects in the universe.

The atoms that make us

Surveying the entire galaxy looking for the radioactive isotope aluminium 26 with Integral, scientists have been able to calculate that a supernova goes off in our galaxy, once every 50 years.

According to Integral, something is creating a lot of gamma rays at the centre of our galaxy - the suspect is positrons, the antimatter counterparts of electrons. Scientists have been baffled as to how vast numbers of such particles can be generated every second and how these sources would be distributed over the sky to match the gamma-ray map.

The densest objects in the universe

Within months of operation, Integral solved a thirty-year-old mystery by showing that the broadband gamma-ray emission observed towards the centre of the galaxy was produced by a hundred individual sources. A catalogue of close to 500 gamma-ray sources from all over the sky, most of them new, was then complied.

Integral has seen about 100 of the brightest supermassive black holes, the main producers of gamma radiation in our universe, in other galaxies. But while looking for them in nearby galaxies, surprisingly few have been found.

They are either too well-hidden or are only present in the younger galaxies which populate the more distant universe.

Galaxies throughout the universe are believed to be responsible for creating the diffuse background glow of gamma rays, observed over the entire sky. Integral used the Earth as a giant shield to disentangle this faint glow. Making the measurements possible was a technological and operational feat.

The data will help understand the origin of the highest energy background radiation and possibly, provide new clues to the history of growth of supermassive black holes since the early epochs of the Universe.

Although not designed to be a gamma-ray-burst ‘watchdog’, scientists realised that Integral could perform this task if assisted by sufficiently powerful software. ESA set a new record for speed and accuracy with the Integral Burst Alert System on 3 December 2003 when a burst was detected, localised and astronomers were alerted in 18 seconds.

The event, called GRB 031203, was faint and close, in cosmological terms, which suggests that an entire population of low energy gamma-ray bursts has so far gone unnoticed.

On 27 December 2004 Integral was hit by the strongest flux of gamma rays ever measured by any spacecraft and it even measured radiation that bounced off the Moon. The culprit was a magnetar, SGR 1806-20, located 50 000 light years away on the other side of our Milky Way. Thanks to this outburst, astronomers now think that some gamma-ray bursts might come from similar magnetars in other galaxies.

Integral has also been able to take images of gamma ray bursts, while the telescope was not pointed in the right direction. This was done using radiation that passed through the side of Integral’s imaging telescope and struck the detector.

Christoph Winkler, ESA’s Integral Project Scientist says “Integral has indeed played a major role in modern gamma-ray astronomy. So much has happened in the span of five years but much more is still to come.”