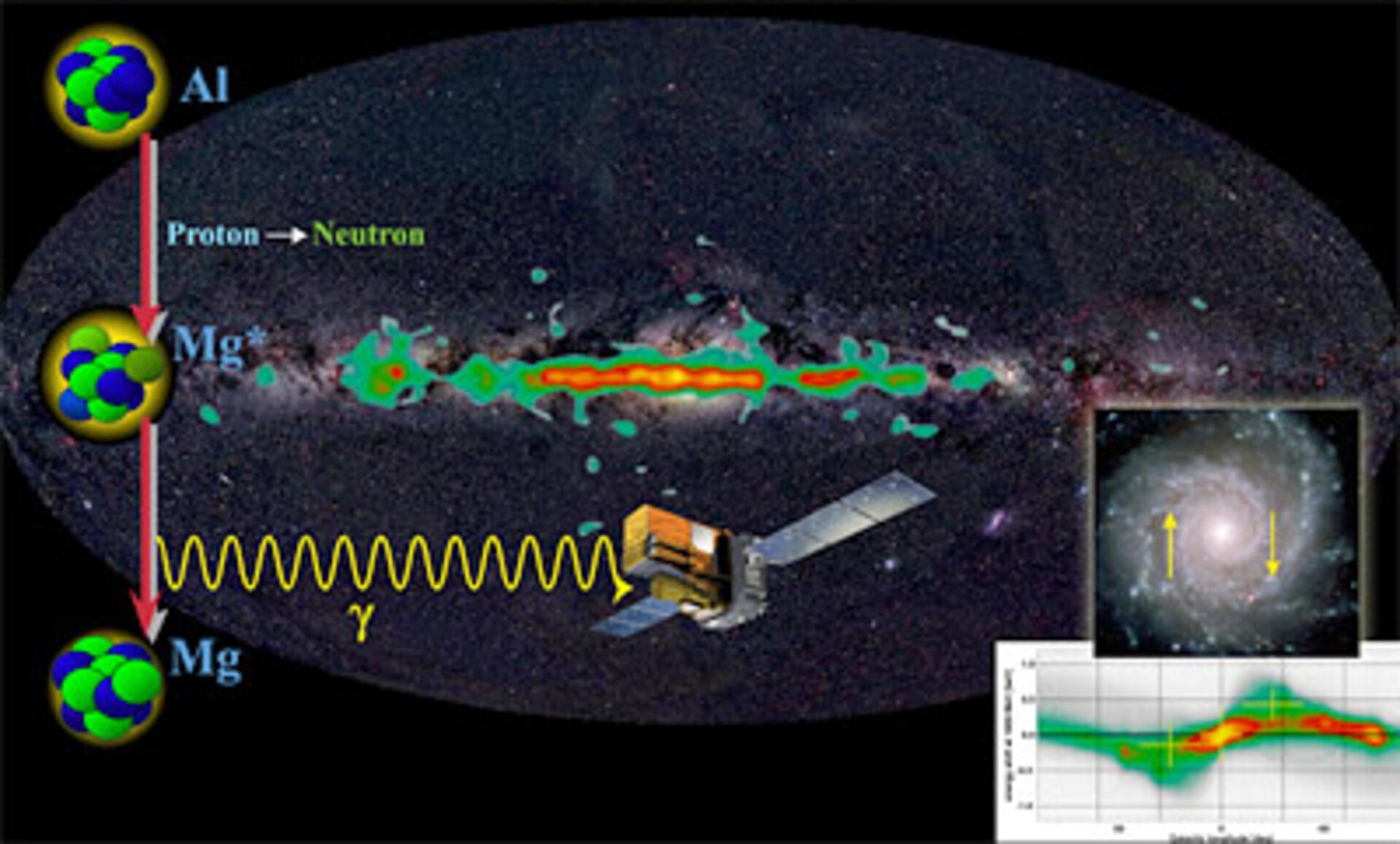 Using ESA’s Integral observatory, an international team of researchers has been able to confirm the production of radioactive aluminium (Al 26) in massive stars and supernovae throughout our galaxy and determine the rate of supernovae - one of its key parameters.

The team, led by Roland Diehl of the Max Planck Institute for Extraterrestrial Physics in Garching, Germany, determined that gamma rays from the decay of Al 26 originate from the central regions of our galaxy, implying that production of new atomic nuclei is an ongoing process and occurs in star-forming regions galaxy-wide.

Our environment is composed of chemical elements formed long ago by nuclear fusion reactions in stellar interiors and supernovae. This process of ‘nucleosynthesis’ leads to the emission of gamma rays, which easily reach us from all regions of our galaxy. ESA’s Integral observatory has been measuring such gamma rays since October 2002.

Roland Diehl and his colleagues were able to measure the Al 26 gamma-ray emissions along the plane of the inner galaxy.

However, because the disc of the galaxy rotates about its central axis, with the inner regions orbiting faster, gamma rays from decaying Al 26 observed from these regions should be moderated by the Doppler effect in a characteristic way. It is this characteristic pattern that has been found by Integral.

From this measurement, the team found that Al 26 decay gamma rays do indeed reach us from the inner regions of the galaxy, rather than from foreground regions along the same line of sight possibly caused by local and peculiar Al 26 production. These regions would not have the observed high relative velocity.

From these new observations, it is possible to estimate the total amount of radioactive Al 26 in our galaxy as is equivalent to three solar masses. This is a lot, given that Al 26 is an extremely rare isotope; the fraction estimated for the early Solar System is 5/100 000 of Al 26, in proportion to its stable aluminium isotope (Al 27).

Because astrophysicists had inferred that the likely sources are mainly massive stars, which end their lives as supernovae, they could estimate the rate of such supernova events. They obtained a rate of one supernova every 50 years - consistent with what had been indirectly found from observations of other galaxies and their comparison to the Milky Way.

Integral’s study of gamma rays will continue to operate for several more years. Astrophysicists hope to increase the precision of such measurements. Project leader Roland Diehl said, "These gamma-ray observations provide insights about our home galaxy, which are difficult to obtain at other wavelengths due to interstellar absorption."

Gamma rays from decaying Al 26 were first detected in space in 1978. Because of its known half-life of 720 000 years, this provided direct proof of currently ongoing nucleosynthesis in recently-formed stars.

In the mid-1990s, Roland Diehl and his colleagues were able to show that this relatively long-lived radioactivity is present over large regions along the plane of the galaxy. Hence, production of new atomic nuclei was found to be common in our galaxy.

Many scientists were surprised, because at the end of the 1970s, traces of Al 26 decay had only been found in meteorite samples originating from the early Solar System. This was interpreted as evidence that the Al 26 radioactivity was a key ingredient in the formation of planetary bodies (radioactive heat is a necessary to melt cometary material to form rocks), and that Al 26 radioactivity was intimately related to the early Solar System. From the theories of the 1950s that all chemical elements were produced inside stars, novae, and supernovae, two competing scenarios emerged that are still debated.

Although gamma rays clearly show widespread cosmic nucleosynthesis, it remains to be understood if only this, or additional local high-energy reactions, has produced the amount of Al 26 inferred for the early Solar System. One way to answer this question is the determination of the total Al 26 content of our galaxy.